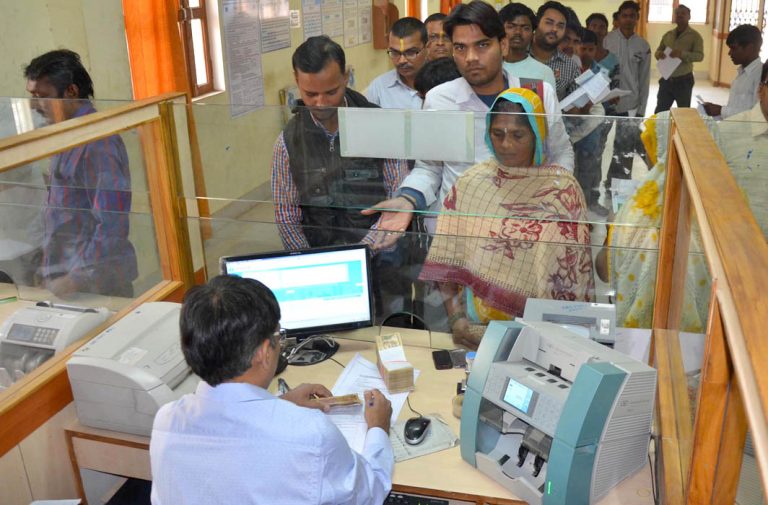 Above: Customers at a Bank counter/Photo: UNI

As increasing cases of corruption hit the banking sector, it is obvious that many Indians don’t look at wrongdoing as a moral issue but as something acceptable as long as they don’t get caught

Limited liability laws are not designed to protect companies from their ethical responsibilities. Businesses worldwide are increasingly becoming aware of the need for ethical considerations in their operations. It is now getting harder for businesses to survive for long by cheating and swindling—good reputations are imperative for long-term success. The age-old adage about the difference between a hustler and a businessman is truer today than it has ever been. A hustler makes a quick buck by cheating, but this gain is short-lived; a businessman, on the other hand, makes a reasonable profit through honest practices and survives a lifetime.

Among all sectors, the banking industry is unique in its adoption of ethical practices because the business is based entirely on trust. When people deposit their life savings in a bank, they do it with the faith that the money will be there when needed. This requires banks to lend responsibly, especially in the modern era of fractional lending where banks lend far more than they hold in deposits.

Recent cases of unethical behaviour by senior executives in Indian banks have cast a pall on the entire banking system. While these indiscretions are not new to a sector that is heavily controlled by the government, they come at a time when banks are under a lot of pressure from bad loans. Taxpayers are beginning to question the ethical responsibilities of bank executives, and the RBI is proposing new rules to incentivise good behaviour and punish errant and unethical practices.

Chanda Kochhar, the powerful CEO of ICICI Bank, was once the poster for women empowerment. But she was recently fired when allegations of cronyism and improper loan practices were levelled against her. Rana Kapoor, the co-founder of Yes Bank, was forced out by the RBI because he failed to adequately disclose the true extent of the bank’s bad loan problem. The CEO and MD of Allahabad Bank, Usha Ananthasubramanian, was fired on the last day of her term and a CBI inquiry launched against her and Punjab National Bank executive director Sanjiv Sharan for their role in the Rs 14,000 loan scandal involving Nirav Modi.

The ethics of a nation’s businesses often reflect those of its society. Anthro­pologist Ruth Benedict popularised the distinction between a guilt-based so­ciety and a shame-based culture. In guilt-based societies, people know their behaviour is good or bad by what their conscience feels. They refrain from specific actions because they inherently recognise them to be wrong. The US and much of Europe would be examples of societies that have a guilt-based culture.

In a shame-based society, a person’s behaviour is often based not on moral perceptions of right and wrong but on the risk of being caught while doing wrong. Personal honour and how others in the community perceive an act is more important than individual values of right and wrong. “A thief is the one who gets caught,” as the saying goes. In such cultures, the first rule when you do wrong is, don’t be found out, and if you are, then bluff your way through. Admit to wrongdoing only when every other alternative has failed because it will bring shame and disgrace.

Neither of these cultures is perfect and there is value to be found in each. Also, while every society has individuals that would fall into either category, one is forced to look at average tendencies when studying social behaviour. Both types of cultures teach personal conduct but have very different approaches to wrongdoing. As a result, they have very different implications for social discipline. The positive aspects of a guilt-based culture are its concern for truth and justice, the preservation of individual rights, and the sense of personal responsibility that comes from knowing that you alone are responsible for doing right even when no one is watching. In the shame-based culture, the desire to avoid shame to the exclusion of all else is the overriding factor.

A good illustration and test of these conflicting moral behaviours is the 1 am traffic light test. In a guilt-based society, it is more likely that a person will not jump a red light even at 1 o’clock at night because he knows it is wrong. But in a shame-based society, he probably will, knowing that he is unlikely to get caught.

Like most Asian societies, India has a shame-based culture. What prevents people from doing wrong is not guilt but the fear of getting caught. Most people in India would fail the 1 am test and jump the traffic light. In such a culture, people with power act like they have a license to engage in secret wrongdoing. When a popular Bollywood actor was killing animals that are on the brink of extinction, his conscience did not alert him to the fact that he was doing wrong. In his shame-based view of things, it mattered only that he would not get caught at night and even if he did, his status as a popular movie star would allow him to bluff his way out.

The 2018 rape and brutal murder of an 8-year old girl in Kathua, Jammu,
is another unfortunate example of India’s shame-based culture. The alleged killers were members of a religious organisation and raped the child in a temple in front of the very gods they feared. They had no moral conscience or guilt of the terrible deed they were doing. They thought they were doing their religious community a favour and would be protected. And as is typical of shame-based violence, this act was carried out by a group of people who each sought embrace from their religious brotherhood.

Shame has a place in any moral system—it does prevent many from doing wrong. But when it dominates guilt and personal responsibility, then people are less reluctant to be
honest, especially if they know they can get away with it. Such shame-based beliefs permeate almost every aspect of Indian life. From politicians to financial institutions, corporations, and even doctors—almost all exhibit the behaviours of a culture that doesn’t look at wrongdoing as a moral issue but as something acceptable as long as they don’t get caught.

India is a complex country with a billion conflicting interests. It is a mostly recalcitrant society which lacks clear rules of personal and public behaviour, poor understanding of the rights of others and woefully little sense of personal responsibility and accountability. It is also a country steeped in centuries of traditions that are tough to change. For example, the “khap” tradition in Haryana, with its focus on community acceptance of right and wrong, is a shame-based society that dominates the lives of its people. Similar traditions can be found everywhere else in the country.

The recent wave of scandals invol­ving moral turpitude among exe­cutives in the banking industry is a cause for grave concern and must be resolved swiftly and sternly. Banks and financial markets are essential to the development of a modern economy and these scandals can cause severe economic damage and may threaten the stability and reputation of banks and the financial sector as a whole. Shaming the perpetrators is essential if a message is to be sent to the banking industry.

In the US, when well-known people are arrested, police officers take them on a “perp walk” where they are made to go through a public area so they can be seen and photographed by the media. Such arrests send a strong message of deterrence and could be used effectively in shame-based cultures like India.It is imperative, also, that a course in ethics, both business and social, be in­tro­duced across schools in the country. Just bringing in conversations on the importance of ethics and exposing young minds to the values of right and wrong will, in a short time, create a generation that is more responsive to ethical dilemmas. The goal should be to create a culture of ethics from an early age by making it an integral part of the education curriculum.

A course in business ethics should also be made mandatory in all business schools to help students understand that they can shape the future as leaders and managers by nurturing an environment that enables ethical decision-making. Japan is an excellent example of a country that moved from a shame-based culture to a guilt-based within one generation by emphasising ethics as an integral part of its education curriculum. India can emulate that, and if politicians and policymakers are serious about addressing the issue of corruption, they have to do more than just become personal examples—they have to change the minds of the younger generation by creating an educational environment that encourages open discussion of ethical dilemmas and how to solve them.

In sensitive areas like the banking sector, norms have to be changed. Several studies have shown that bank employees that take a professional oath analogous to the Hippocratic Oath for physicians have significantly higher levels of ethics compared to those that don’t. When supported by regular ethics training, international banks have found that employees shift their focus from their short-term benefits to more altruistic measures like the impact of their behaviour on society.

Corruption in the banking industry is a manifestation of a more significant problem in India. An ineffective and slow-moving judicial system, an educational system that forces short-term rote learning over more enduring lessons on values and morals, an overreaching government which controls large swathes of the economy and a shame-based culture where survival trumps rights, are creating rampant corruption and sucking the life out of the nation.

A “Swachh Bharat” campaign to sanitise attitudes towards ethics and personal responsibility is the call of the day. But that can only be done by leaders and not politicians.