Above: Finance Minister Arun Jaitley addresses the Central Board of Directors of the RBI. In a meeting on Nov 19, the board acceded to the government’s request to work out a loan restructuring scheme for small and medium enterprises/Photo: UNI

The war between the top bank and the centre has abated, though not a single paisa has been added to the RBI’s reserves in the last four years. This could herald bad times for depositors

The ministry of finance and the Reserve Bank of India (RBI) recently engaged in a dangerous game of chicken. Eventually, both sides realised that “winning” or playing such a game to its conclusion is not in the best interest of either player. The RBI cleverly appeared conciliatory and gave a little on two issues that are unlikely to impact markets, but held its ground on the critical issues of independence and preserving its capital reserves.

There were three issues of contention between the government and the RBI:

On this point, the sides agreed to form a committee to “study” the issue of the magnitude of the RBI surplus. Essentially, the can was kicked down the road past May 2019. The RBI understands that getting this issue away from the heat of the election season will allow it to present facts to a committee and more rational heads will recognise that RBI’s capital surplus is a mirage.

It appears that the government won on two issues and the RBI on two—essentially a convenient draw. The RBI won the principled war on keeping its operational independence and on preserving its capital reserves. It relented on opening up the credit spigot for small and medium businesses and threw a lifeline to weak government-run banks giving them additional time to build up their capital reserves.

But if the Modi government gets re-elected, expect this can of worms to get reopened again. Its most recent appointment to the RBI Board is S Gurumurthy, an accountant and economist. He concocted the idea of demonetisation and convinced Modi that a decrease in the RBI’s liability from the unreturned currency would release about Rs 3.4 lakh crore from its capital account to the government. That didn’t pan out as only Rs 10,720 crore of the junked currency did not return to the banking system. Call it coincidence, but the amount the government wants to grab from the RBI surplus (around Rs3.3 lakh crore) is almost identical to the surplus Gurumurthy envisioned from demonetisation.

But does the RBI really have a capital surplus and if it does, can it be just transferred to the government? Chapter 4, Section 47 of the RBI Act, titled “Allocation of Surplus Funds”, mandates the RBI to transfer the profits from its operations to the centre in the form of a dividend. Anyone who has studied accounting knows the difference bet­ween profits and capital. The RBI Act requires only that the central bank transfer its profits to the government and not the reserve capital built up over time.

As the nation’s bank, the RBI generates income from lending money to the government and other commercial banks. It also maintains deposits of gold, foreign currency and currency notes which are invested in global capital markets to generate income. It uses this income for its operations and to print new bank notes. Whatever surplus is left is given to the government as a dividend after setting aside reserves to cover financial contingency.

A table shows the revenue, expenses, profits and reserves of the RBI over the last nine years. In the previous five years, the RBI has transferred Rs2.124 lakh crore to the government—more than the entire previous decade. It has also been more generous to the Modi government than it was to the Manmohan Singh government. During the two terms of Singh, the government received an average of 46.5 percent of the surplus, but the Modi government received 100 percent of the surplus. 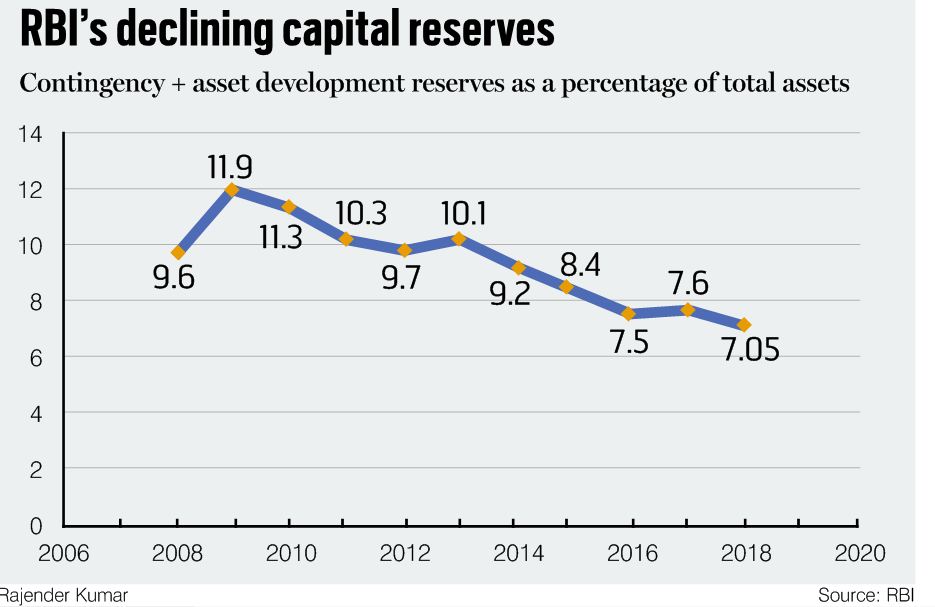 Here is the real irony. Not a single paisa has been added to the RBI’s reserves in the last four years despite a significant increase in risk in the banking system. And this has to concern everyone who has a bank deposit.

Is the government justified in its claim that the RBI has excess reserves? The RBI’s reserve capital consists primarily of two parts: a contingency reserve to be used if the RBI is required to provide liquidity to protect depositors in case of a banking crisis, and the currency and gold re-evaluation account (CGRA) which is the daily gain/loss in the value of gold and foreign exchange it holds. As of June 2018, there was Rs2.321 lakh crore in the contingency reserve account and Rs6.9 lakh crore in the CGRA account.

In 2009-10, with the economy growing at 10 percent, and no NPA crisis, the contingency fund had Rs1.53 lakh crore or about 12 percent of assets. Today, with a less robust economy and a growing NPA crisis, the reserves are Rs2.32 lakh crore or seven percent of assets. Clearly, not the excess the government claims. It would be reckless for the government to touch this amount given the state of India’s banking system. That would endanger the country’s monetary stability and the life’s savings of millions of depositors.

What about the reserve capital in the CGRA account?  This amount fluctuates daily with the price of the gold and foreign exchange reserves held by the RBI. In 2009, when gold was Rs1,456 per gram, and the dollar/rupee exchange rate was 46.3, this amount was Rs1.988 lakh crore. In June 2018 (the end of the RBI’s latest fiscal year), with gold at Rs3,038/gm and the dollar/rupee exchange rate at 68.4, the value of this account was Rs6.9 lakh crore.

Can the government claim this “unrealised” gain? The only way to realise this gain is by selling the country’s gold and foreign exchange reserves. This would be extremely imprudent, and from an accounting standpoint, it makes no sense.

The RBI’s balance sheet is unlike a corporate balance sheet because its assets (gold and exchange reserves) support the issuing of currency. Selling assets to capture realised gains will require a corresponding reduction in liabilities, i.e., currency in circulation. The net increase in capital in the system from this transaction would be zero. So, if the government thinks it is getting free money by raiding these reserves, it is only an illusion. The only real effect from a decrease in reserves would be to put pressure on interest rates.

The Modi government needs to play its hand very carefully. It appears that the government wants to be more involved in “managing” the country’s monetary policy. And that is a scary thought. Politicians and bureaucrats always overestimate their capabilities, but doing so at a time when the nation’s banking system faces a severe crisis could have a devastating impact on the economy. Elections are not that far away, and economics plays a big part in how people vote. And when it comes to economics, it is not the 56 inches of chest but the six inches between the ears that matter.