The demonetisation drive has shown that the central bank under Urjit Patel has surrendered its autonomy to the government. This doesn’t behove well for the economy or democracy

There is now growing consensus that a major casualty of Prime Minister Narendra Modi’s demonetisation drive has been the autonomy and independent functioning of the Reserve Bank of India (RBI). In its 83-year-old history, the prestigious central bank has never been accused of being a stooge of any government. In fact, it enjoys the reputation of having discharged its functions in a highly credible and commendable manner. Unfortunately, that spotless record was shattered on November 7-8 when the RBI succumbed to pressure from the government and agreed to implement an overnight currency culling exercise without applying the one quality that it was known for—due diligence.

If written proof of the RBI’s tearing hurry to appease the government was required, we have it now. The official seven-page note submitted by the central bank to parliament’s Department Related Committee of Finance on December 22 is now in the public domain, thanks to The Indian Express. The note is fairly explicit about something that many experts suspected all along—that the RBI did not recommend withdrawal of Rs 500 and Rs 1,000 currency, but it was “advised” or pushed by the government on November 7 to consider demonetisation which was sprung as a surprise on the nation the following evening by the prime minister.

The RBI was virtually handed a fait accompli which its board had to endorse by the November 8 deadline set by the government. The central bank’s board met and gave its assent. As former finance minister and senior Congress leader P Chidambaram told mediapersons on the sidelines of the Jan Vedna Sammelan, a party meet protesting demonetisation in Delhi on January 11: “The government has virtually taken over the RBI’s functions. It is either speechless or stunned into silence. The government seems to be telling the RBI that I will walk and you will follow. It has been reduced to function like a government department.” 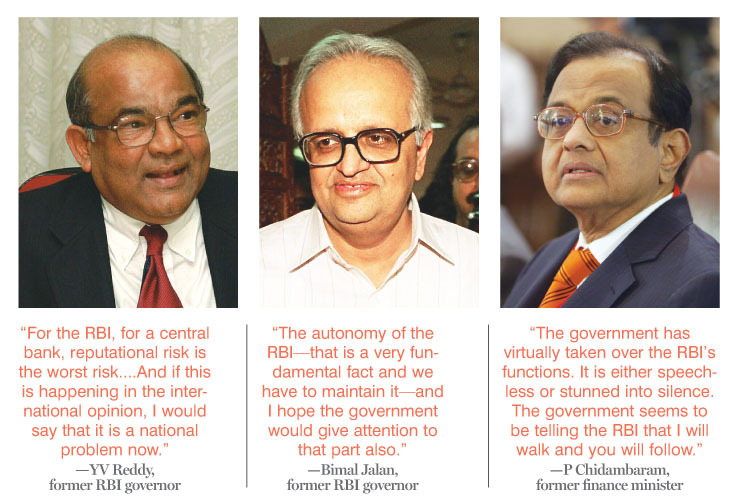 Former RBI governors have in the last week expressed similar views. YV Reddy, who headed the central bank from 2003-2008, had this to say: “For the RBI, for a central bank, reputational risk is the worst risk. Credibility is the worst risk. And if this is happening in the international opinion, I would say that it is a national problem now and not just a political issue.” Bimal Jalan, a former RBI governor, agreed that the autonomy of the central bank was sacrosanct and must be upheld. “The autonomy of the RBI—that is a very fundamental fact and we have to maintain it and I hope the government would give attention to that part also,” he said during a discussion on CNBC.

Raghuram Rajan had in a speech at St Stephen’s College on September 3, 2016, said: “We have been tasked with a job of maintaining macroeconomic stability, and often that task requires us to refuse seemingly obvious and attractive proposals. The reason why we have to do what we have to do may not be easy for every unspecialised person, even ones with substantial economics training, to grasp quickly… The Reserve Bank cannot just exist, its ability to say ‘No!’ has to be protected.”

One can now infer from the RBI note to the Parliamentary Committee that the finance minister, bank heads and the Cabinet Committee on Economic Affairs were not consulted before demonetisation was pushed through. In fact, details of the exercise that are now emerging from sources in the finance ministry shed further light on how opaque the PM’s “surgical strike” was and how the RBI readily yielded to pressure in quick time. Consider the following:

“We have been tasked with a job of maintaining macro-economic stability, and often that task requires us to refuse seemingly obvious and attractive proposals. The reason why we have to do what we have to do may not be easy for every unspecialised person, even ones with substantial economics training, to grasp quickly… The Reserve Bank cannot just exist, its ability to say ‘No!’ has to be protected.”

The BJP’s position on demonetisation is that the government was well within its rights to order the RBI to act since this power was mandated in the Reserve Bank of India Act 1934 which led to the establishment of the central bank. Indeed, Section 7 the Act lays down: “(1) The Central Government may from time to time give such directions to the Bank as it may, after consultation with the Governor of the Bank, consider necessary in the public interest. (2) Subject to any such directions, the general superintendence and direction of the affairs and business of the Bank shall be entrusted to a Central Board of Directors which may exercise all powers and do all acts and things which may be exercised or done by the Bank.”

The government may well be covered by the Act, but the spirit of independence under which the RBI has been functioning has been compromised. Never has such pressure been put on it in the history of the institution. In the post-demonetisation phase, the supremacy of the government over the central bank was further emphasised when Modi in his New Year address to the nation directed the RBI to increase credit and working capital limit for small-scale industries. He also asked the central bank to provide 8 percent interest to 10-year fixed-term deposits for senior citizens and directed banks to drop lending rates. The government was calling the shots and taking over the duties of the RBI.

The BJP’s position on demonetisation is that the government was well within its rights to order the RBI to act since this power was mandated in the Reserve Bank of India Act 1934.

Is this a healthy trend and does it bode well for the economy? The broad consensus is that the RBI should be allowed to function with autonomy and should not be subject to manipulations by the government or be subsumed by it. In fact, had it not been reduced to a “Yes Man” status, then perhaps the RBI would have put its foot down. It would have vetoed the overnight demonetisation move and recommended better planning and a phased implementation if at all the exercise had to be conducted.

Many believe that a central bank under a more independent governor like Raghuram Rajan would have chartered such a course.

Perhaps the last word on all this goes to former RBI governor YV Reddy who likened the RBI to an army which guards the financial and monetary security of the nation and hence must not be messed around with by politicians. “In the final analysis and particularly for our country, the financial security function should be with a non-political set up like the Governor of the RBI. Now that initiative has gone to the government…”

Lead picture: The official note from RBI reveals that it was virtually handed a fait accompli by the government to endorse the demonetization drive. Photo: Anil Shakya