With the Automatic Exchange of Common Information kicking in from 2018, unaccounted wealth in banks in Switzerland is being withdrawn and parked in the US, Dubai and Singapore

~By Rashme Sehgal in Geneva

There has been a large flight of capital from Swiss banks even before the introduction of the Automatic Exchange of Common Information (AECI), which will kick in from 2018. It has been signed by over 50 countries who are members of the Organisation for Economic Cooperation and Developments (OECD).

The Swiss banking system has paid a heavy price for handling these unaccounted-for offshore deposits, especially as several of the smaller banks in the country had specialised in handling them. The blanket of secrecy surrounding Swiss banking transactions had ensured that they look after deposits of largely unaccounted wealth from well-heeled clients across the globe, including India. But this is not going to be the case any longer.

Pressure on the Swiss government to provide details of all account holdees has resulted in the outflow of millions of dollars of deposits from these banks, thereby causing many of the smaller Swiss banks to shut shop. One such high-profile Swiss bank that was forced to file for bankruptcy was Hottinger and Cie which was founded in 1786.

A KPMG study showed that 30 percent of private banks had recorded losses in 2014-15 which resulted in several thousand bankers being laid off from their jobs. Louis Tari, a Geneva-based banking and tax advisor, said: “The smaller private banks dealing with offshore accounts posted huge losses and the result was that bankers handling these accounts lost their jobs under the restructuring process.” Tari added: “With the introduction of the AECI, information of all non-Swiss residents belonging to the OECD countries will be automatically sent to the federal tax authorities in Berne, who in turn, will dispatch this information to the relevant countries. The authorities in these countries can, in turn, check if the account holder has declared his income or not.”

Zurich-based banker Hanspeter Baumgartner said: “What is significant is that Swiss banks have frozen all accounts of holdees with ‘black’ money, informing them that they should either regularise their account in their country or else their asset will be frozen.” He added: “The flip side is that Swiss nationals who had accounts in the Bahamas or in Panama have had to declare their accounts. This has seen an influx of francs into Switzerland but the amount is not very large.”

The amount of money of Indian nationals in Swiss banks has been steadily declining and in 2016, it amounted to a mere Rs 4,482 crore, according to data released by Switzerland’s central bank, Swiss National Bank. Compare this to money deposited in 2015—Rs 8,135 crore—and 2014 when it was Rs 12,350 crore.

So, statements by the Indian government that billions of dollars have been stashed away in Swiss banks by Indian citizens are largely overstated, analysts believe, as Switzerland never saw such massive deposits from any country.

Nathalie Bersier, a lawyer who works as a consultant for Swiss investments in India, said: “From 2009, the Indian government has been highlighting the issue of black money without realising that the easiest thing to do for a client is to close a bank account and transfer the money out. Such a flight of capital has already occurred.”

Bersier added: “In Switzerland two years ago, the perception was that Indian assets were between $900 million and $4 billion. Today, I would say, the amount would be less than $900 million. More than half the undeclared money from India that was stashed in Swiss banks has been moved to Dubai and Singapore, from where it would be invested in real estate, gold or re-enter India through the hawala route.”

Former Swiss state secretary for International Financial Matters Jacques de Watteville who had visited India in 2016 to negotiate with his counterparts in the Ministry of Finance, had refused to hazard a guess about just how much money has been moved out of Swiss banks to be invested in Dubai or Singapore. Watteville said: “There are no official figures on the assets transferred out of Switzerland.”

While in India he had emphasised that “combating the menace of black money and tax evasion is our shared priority. We discussed the need for an early and expeditious exchange of information to bring to justice the tax offenders”.

Many Indian analysts believe some of this money has been routed to the US with the government actively encouraging foreigners to deposit money in American banks, no questions asked. Some US states and cities have emerged as veritable tax havens. South Dakota, to cite an example, has been described by some analysts as the “new Switzerland”. Its role as a tax haven was emphasised in the Panama Papers, which highlighted that US offshore assets remain anonymous. The city of Delaware is also said to be another tax haven with over one million registered entities claiming to operate from there.

The fact is that while international disclosure rules comprising the AECI have been accepted by the OECD countries, the US has refused to accept them and is not a signatory to it. Tax Justice Network, a US-based NGO, has pointed out how the US does not practice what it preaches. A Swiss financial analyst, who spoke to India Legal, on condition of anonymity, has accused the US of having crushed Swiss banks.

As trusts can operate as shell companies in some US states, it is ironical that a Swiss trust company has gone ahead and opened an office in South Dakota. The analyst feels that some of the flight of capital from Switzerland has ended up in the US. This is because while non-US banks and financial institutions across the world have to reveal American account details, this is not the case with US deposits by offshore account holders. 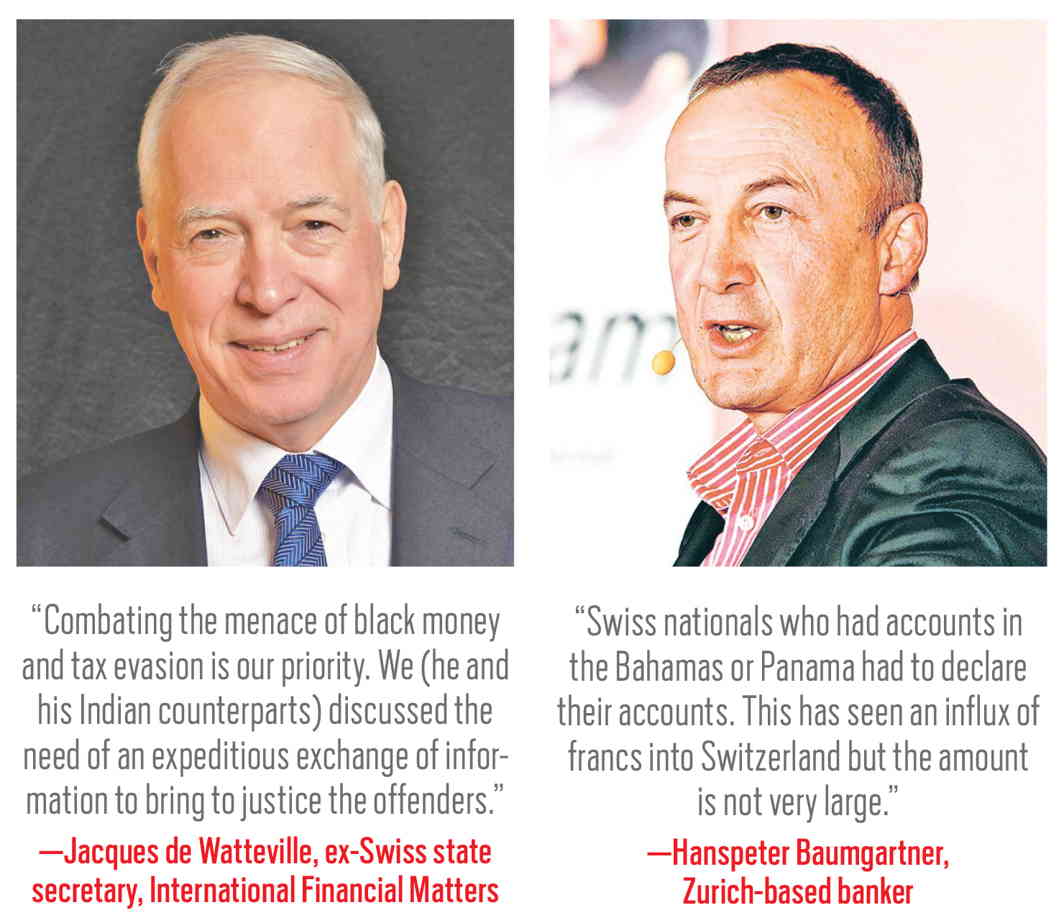 Bersier does not see too much emerging from the Federal Council consultations with the Indian government on the need to detect, recover and repatriate illegal deposits. “The key issue is what pressure the Indian government can exert on the Swiss government,” said Bersier. He further said: “The US threatened to close all Swiss banks operating in the US which led to the Swiss immediately signing a treaty with the US and the UK. There are no Swiss banks operating in India.”

On the subject of the AEOI information between the Swiss and the Indian governments expected to be operationalised by 2018, she remains equally cynical. Erecting the AEOI platform is all very well, she said, but it is too little too late. Berseir believes that by the time it becomes operational, all the illegal deposits will have been moved out. There are any number of countries where this money can be moved to.