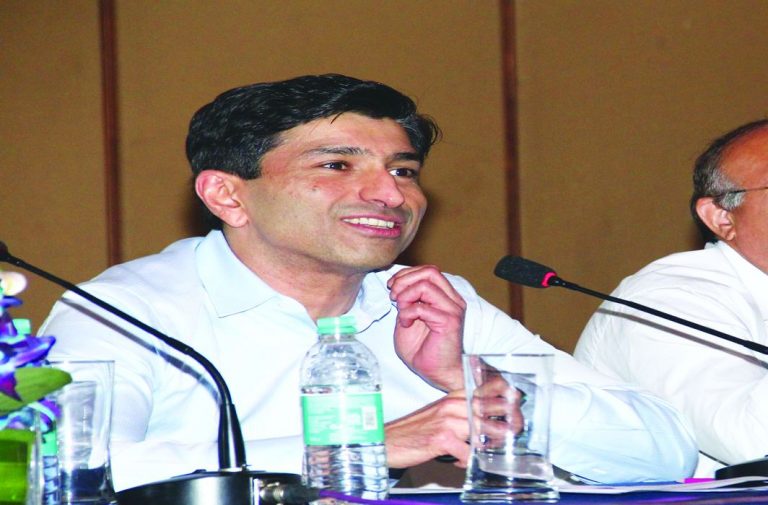 It has been a particularly busy week for the CBI and ED sleuths. Along with former Home Minister P Chidambaram, they have in custody Ratul Puri, Madhya Pradesh Chief Minister Kamal Nath’s nephew, who has been denied anticipatory bail for the second time in a week in two separate cases.

One case relates to suspected money laundering in the AgustaWestland chopper deal. Prior to this, Puri was probed and raided by the IT department and taken into custody by the ED last week following an investigation into an alleged fraud case filed by the Central Bank of India against him, his father, Deepak, his mother, Neeta, and two others.

Puri’s arrest came following an ED summons. After answering questions late into August 19, he was arrested. It seems the Central Bank of India lent Puri’s company, Moser Baer India Limited (MBIL), Rs 345 crore on fraud representation. It came to light after a forensic audit of MBIL accounts. The Central Bank had complained that Puri had misused the funds provided in 2009 for personal gains. The ED investigated the matter under the provisions of the Prevention of Money Laundering Act and took custody of Puri after one of his prized assets on Delhi’s Prithviraj Road was attached.

Puri has now moved an application before a Delhi special court for surrender after his petition for cancellation of a non-bailable warrant (NBW) in the AgustaWestland case was not allowed.

Puri was also at the centre of a Rs 280-crore IT department allegation during the Lok Sabha elections. The department raided premises of people close to Kamal Nath, including his principal secretary, RK Miglani, OSD Praveen Kakkar and Puri. It allegedly found a note detailing hawala transactions of Rs 280 crore. Part of this money seems to have gone to the AICC coffers. That case is still pending investigation. So Puri has had all three strong arms of the state unleashed on him: the IT, CBI and ED.

Puri, 47, and father Deepak ran the iconic software and computer hardware manufacturer company, Moser Baer. MBIL had units in almost all industrial sectors of Noida and during the peak years of CD and floppy disc usage, Moser Baer products were in demand. It shut shop last year and went into liquidation. Puri resigned from MBIL in 2012, but the case he is being probed for is from 2009 when he was CEO of the company.

The pursuit of “justice”

This year has seen numerous probes being conducted against Opposition leaders and those perceived as anti-BJP. Is this another undeclared Emergency?

There is little doubt that central agencies have been (mis)used by all parties in power in Delhi, but the present government may have fine-tuned this to a degree that is now frightening the Opposition into submission. The CBI, Enforcement Directorate (ED), the Income Tax Department and even the CRPF have been used so relentlessly that it has led to allegations of an undeclared Emer­gency. Those who have been hounded include MPs, MLAs, state ministers, media moghuls, bureaucrats and policemen seen as sympathetic to Opposition leaders. BJP leaders and spokespersons have diligently sought to play down all such raids and cases as the law taking its course.

Even as we go to press, Raj Thackeray, who was critical of the BJP regime, is answering the ED’s questions in Mumbai and fresh cases have been registered against Prannoy Roy, Radhika Roy and Vikram Chandra of NDTV.

But a few things stand out in the government’s pursuit of justice: it’s almost always against the Opposition and in some cases, against those opposed to top leaders of the BJP. It’s almost always a case that has been pending for the past few years or even decades as in the case of Sanjiv Bhatt, a Gujarat-cadre IPS officer. The raid is always well-timed either with elections or image-building exercises. The badgering usually ends once the target has succumbed to pressure and joined the BJP like Narayan Rane, Radhakrishna Vikhe Patil and Mukul Roy, or are behind bars like Lalu Prasad and Chidambaram. So far, no such case investigated by the CBI or ED has reached a logical, final conclusion.

In a series of raids before the May general election, TDP MP Galla Jayadev’s premises were raided by IT officials. Galla, a multi-millionaire industrialist and managing director of the Amara Raja Group was going to contest the elections. Before the raids on him, Madhya Pradesh Chief Minister Kamal Nath’s associates were raided on April 7. Earlier on April 5, the premises of Tirumala Tirupati Devasthanam’s chairman and TDP Mydukur assembly constituency candidate Putta Sudhakar Yadav and TDP leader and businessman CM Ramesh were raided. The TDP had been critical of the Modi government after it exited the NDA.

Just days before that, on March 27 and 28, IT officials conducted raids in Karnataka, where the JD(S)-Congress alliance was in power. Karnataka Minor Irrigation Minister CS Puttaraju was the target. Also targeted were the premises of associates of Chief Minister HD Kumaraswamy’s brother, Public Works Department Minister HD Revanna. In UP, BSP chief Mayawati’s aide and former IAS officer Net Ram was raided in March. In January, the ED had conducted searches in connection with alleged irregularities of over Rs 111 crore in the construction of memorials during the tenure of Mayawati between 2007 and 2012. In West Bengal, several TMC leaders including parliamentarians like Kunal Ghosh, Srinjoy Bose, Sudip Bandyopadhyay and Tapas Pal, and state minister Madan Mitra were arrested by the CBI for their links to the Saradha Scam. Two others, Mukul Roy and Assam minister Himanta Biswa Sarma, were questioned but they are now in the BJP. In Tamil Nadu, IT sleuths searched more than four premises linked to DMK treasurer Duraimurugan in March.

The CBI, meanwhile, is probing corruption cases against former chief ministers of Himachal Pradesh and Haryana— Virbhadra Singh and Bhupinder Singh Hooda respectively. Former Uttarakhand CM Harish Rawat is facing a probe in connection with an alleged sting operation purportedly showing him offering bribes to rebel Congress lawmakers to support him during a floor test. RJD supremo Lalu Prasad and son Tejaswi are under investigation for the IRCTC scam, while Delhi Health Minister Satyender Kumar Jain is being probed for alleged corruption in hiring a creative team for the PWD. In the past four years, the CBI has raided their properties, questioned them and registered criminal cases. These are under the supervision of IPS officers who are from the Gujarat cadre and came on deputation to the CBI over 2014-17.

It may be recalled that ahead of Alok Verma taking over as CBI director, a SIT was set up in June 2016 to probe key corruption cases involving politicians. The SIT was headed by then Additional Director Rakesh Asthana. The six cases first assigned to the SIT included the AgustaWestland scam allegedly involving top Congress leaders, Mallya’s loan default case, an ambulance scam in Rajasthan allegedly involving former CM Ashok Gehlot, former Union minister Sachin Pilot and Karti.

Among officers who have been raided and harassed by the CBI and ED are Rajendra Kumar, private secretary to Delhi CM Arvind Kejriwal, and Kolk­ata police commissioner Rajiv Kumar.

All these are cases of 2019. In 2017, the IT conducted raids on 64 locations related to Congress leader and Karnataka Power Minister DK Shivakumar.

It also searched the offices of Shivraj Patil’s son, Shailesh Patil, in Chandigarh and Delhi in connection with money laundering cases.

As for the BJP leaders, only one minor leader from Uttarakhand was raided by the IT and he was later disowned by his party.

Since then, the Puris diversified into several sectors, including thermal power and construction. Puri is now chairman of the Board of Directors of Hindustan Power Projects. The company is currently developing power assets across coal, thermal, solar and hydro with a combined investment of $5.6 billion of which $3.1 billion has been invested in the last four years. Some of these assets are in Madhya Pradesh. Incidentally, Puri was named by The Economic Times as one of the top 21 young leaders who would shape the future of the country in 2014.

Puri was granted protection from arrest by the special court in the Agusta case as also in the current ED investigation in the Central Bank fraud case. But in both cases, the orders were cancelled. In the Bank case, he was arrested even before he could approach the High Court. Even his anticipatory bail has been cancelled.

While the IT case may take some time and is dependent on some loose sheets of papers found during the raids, the Agusta one is dependent on oral evidence and nothing substantial has been found in terms of routing of the money and foreign bank accounts as alleged by the ED. The case pertains to alleged irregularities in the purchase of 12 VVIP choppers from Italy-based Finmeccanica’s British subsidiary, AgustaWestland. The deal was scrapped by the NDA government in 2014 over alleged breach of contractual obligations and charges of kickbacks. According to the ED, the proceeds of the crime have been deposited in the accounts of different companies owned by Puri and he is a key link to unearth the modus operandi adopted by the other accused.

Puri’s name came up in the Agusta scam after the co-accused in the case, Rajiv Saxena, was repatriated to India from Dubai and turned approver. Much like the Chidambaram case where Indrani Mukerjea turned approver, the Agusta case against Puri hangs on the evidence to be provided by Saxena. So far, he has provided some exchange of messages between himself and Puri. In one of the exchanges, they discussed Sushen Mohan Gupta, a co-accused in the case after Saxena offered to turn approver.

Last week, Puri appeared before the ED but gave the sleuths the slip on the pretext of using the urinal. He then switched off his phone and approached his lawyers to file for anticipatory bail.

The Central Bank case is a little more complex. MBIL had taken loans from several banks in 2008-09, including Central Bank. It was found that the money had been diverted by MBIL into other accounts for personal use. Here the trail might be a little more direct but it is still a complex web of companies.

Kamal Nath, meanwhile, has publicly dissociated himself from the business ventures of the Puris. The drama of investigations surrounding Puri began only after his uncle became the chief minister of MP and sought to consolidate his position with the help of Independents and BSP MLAs in the assembly. “Old files have been dusted off wantonly to effect the arrest. It is an effort to destabilise Opposition governments through such harassment,” said Rajya Sabha MP Vivek Tankha to India Legal.

It is all about the political impact of these cases, it seems.