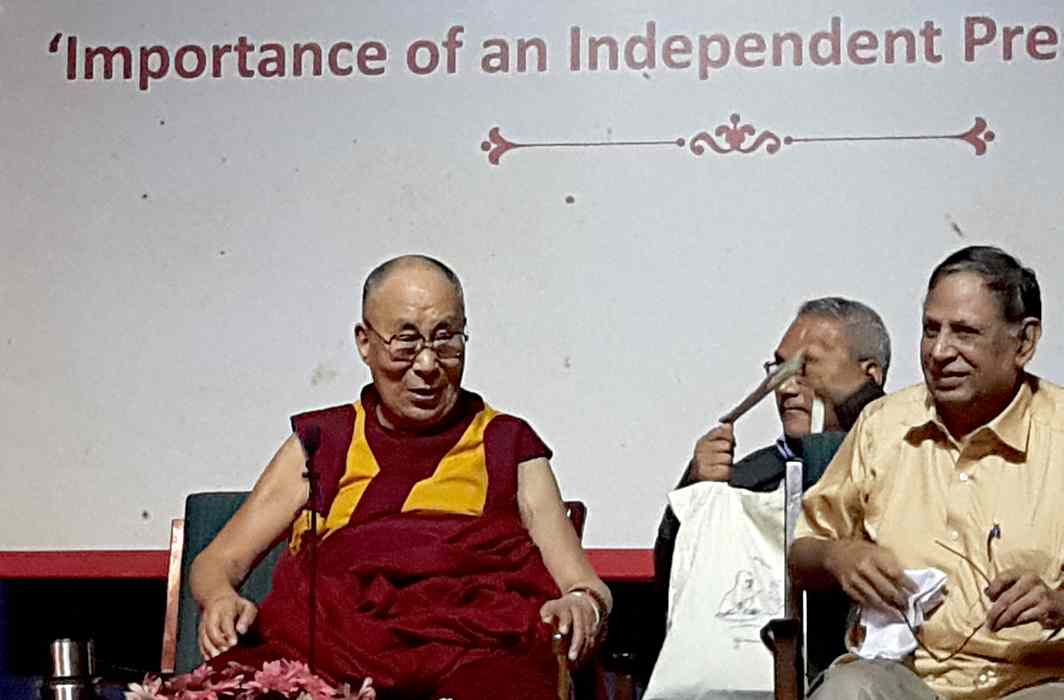 Above: The Dalai Lama at the Nehru Memorial Library, New Delhi, the venue for the Rajendra Mathur Memorial Lecture organized by the Editor’s Guild of India. Photo: Meha Mathur

His Holiness the Dalai Lama is mellowed, mild-tempered and content to be just a ‘Son of India’.

There is something almost childlike about the Dalai Lama which tends to dilute the gravity and importance of the words he is speaking. He tends to break out into a giggling fit whenever he detours into one of his humorous asides, which is fairly often. He will grab the arm of the person sitting next to him and you almost expect him to start throwing high fives with those sharing the dais. It would not seem out of place. For all his stature as a Nobel Laureate and the 14th Dalai Lama, the prefix of His Holiness, and the respect, even reverence, with which he is greeted by everyone, from commoner to celebrity, he exudes an earthy, infectious charm that is both endearing and astute.

Watching him speak on August 9 at the Rajendra Mathur Memorial Lecture organised by the Editors Guild of India, the Tibetan spiritual leader’s quirky characteristics and choice of words, replete with harmless homilies, is perhaps a persona he has been forced to assume. It is one that makes him the guru of euphemisms.

For all his elevated spiritual status and enviable global profile, the Dalia Lama knows he walks a political and diplomatic tightrope every day of his life. His presence in India is a constant source of friction between New Delhi and Beijing and India often uses him as a tool, giving him permission to visit areas that it knows will act like a red flag to the bull in the China shop.

His recent visit to the Tawang monastery in Arunachal Pradesh is a prime example. On New Delhi’s part, it was deliberate provocation and sent the Chinese ballistic, with dire warnings and reminders of China’s military prowess. Yet, at the lecture, meant to be on the media and ethics, HH mentioned the Tawang visit only to emphasise the fact that he was growing old and that his ‘creaking knees’ had given him problems, which was why he opted to sit and deliver his lecture. He was equally at pains to remind the audience—a mix of journalists, Tibetan groupies, and diplomats from various missions in Delhi—that he was now ‘retired’ and had no official or political role.

Having made the point, from then on, it was vintage Dalia Lama, mixing bromides with borderline politics, chiding and yet praising the media, and right through, knowing he is a guest, albeit an honoured one, of the Indian government, giving fulsome praise to Indian democracy and its stabilizing influence in the region.

He started by glancing down at the dignitaries seated in the front row—senior retired Indian diplomats and ex National Security Advisors—and greeted them with a cheery “hello, lots of old friends”, adding that “this looks like a reunion.’’ These were people who had dealt with him in their official capacity so the bonhomie was explainable. His lecture, as is his wont, wanders from the topic listed, but if you listen closely enough, there are always hidden gems.

The venue of the lecture gave him cause for some diversions. It was at the Nehru Memorial, which was where India’s first prime minister stayed while in office. HH mentioned the numerous times he had visited Nehru and their discussion about China, hinting that they did not always part in a friendly manner. “Prime Minister Jawaharlal Nehru laid the foundation for the welfare of Tibetans in exile in India. It is only in India that all the major religious traditions exist side by side. Sometimes problems takes place, not unusual as so many varieties of traditions live here. But it is here alone that all live in full freedom,” he said. The euphemism was not lost. “Some problems’’ was his way of downplaying worrisome trends in favour of the bigger picture.

So was the case with his views on the media, where he remarked, almost as an afterthought, that “propaganda makes things complicated”, and that the media is to blame for the ‘sharp rhetoric’. He had delivered a short speech by his standards—maybe his health and his 82-year-old body was to blame—after which he threw the floor open to questions, with, inevitably, the first one being on the face off between New Delhi and Beijing. His criticism of the media being responsible for the heated rhetoric was spot on, and suggests that his mind is as sharp as ever, and that he does indeed watch a lot of television news.

The other questions on China also showed why he is the guru of euphemisms. He praised President Xi Jinping for his fight against corruption, but then drew some blood by remarking that he could not stay in a place where there was no freedom (Tibet), and preferred the ‘heat of India.’ Right through the event, he kept referring to himself as a “’Son of India,’’ well aware that his speech, in a room full of journalists, would be given widespread coverage.

Yet, what the lecture and Q&A session suggested was that we could be seeing the last of the man who has served as an inspiration for resistance movements across the world, and the start of another—a return to the Dalai Lama’s original role—purely as a spiritual leader. He made it clear that there was no urgency to select the next Dalai Lama and indicated that the process of finding his successor, who might as well be a woman, will begin in the next two to three years. More important was his assertion that the next Dalai Lama may not have a political role to play in future and that China should not worry about his role or that of his successors.  There is no longer a wolf in sheep’s clothing. There is only the sheep.