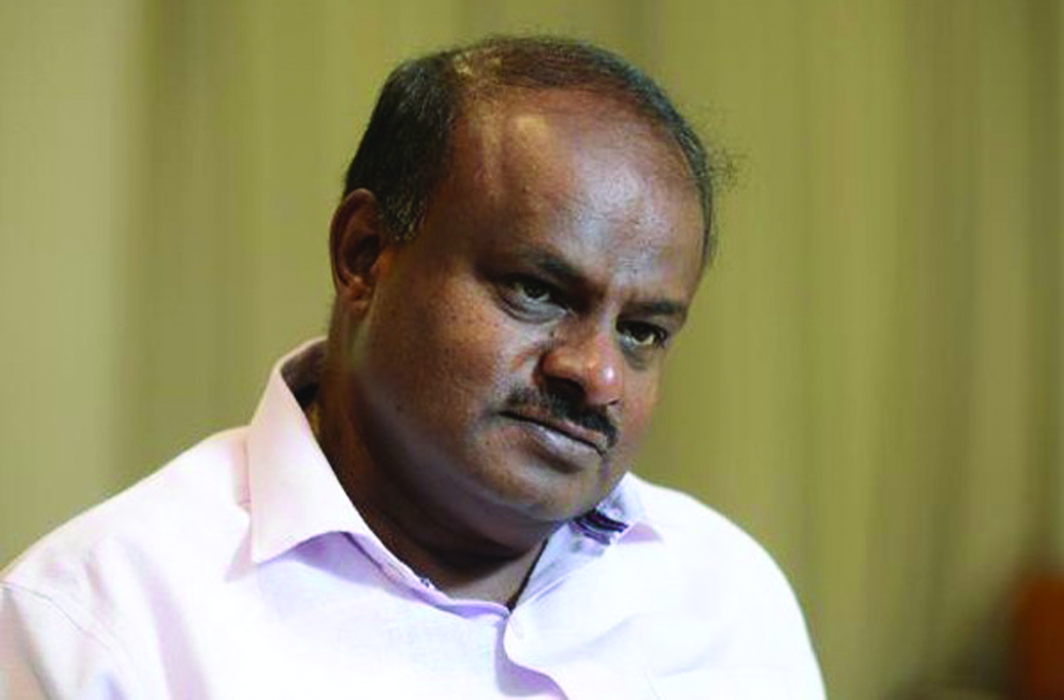 Above: The decks are clear for JD(S) state chief HD Kumaraswamy to take over as next CM with BS Yeddyurappa resigning before the floor test in the state assembly/Photo Courtesy: Facebook

Failing to get the numbers, BS Yeddyurappa quits as CM amidst a huge embarrassment for the BJP and its attempts to form a government in the state through the back door. It marks the Supreme Court’s finest moment

Few state elections have witnessed such desperation and naked hunger for power at any cost. Falling short of the required numbers to form a government on its own, an ideologically friendly governor threw the Constitution and democratic norms to the winds and declared BJP’s BS Yeddyurappa as the chief minister. This followed a cliffhanger of an election where the BJP fell short of a majority by seven votes while the wily JD(S) leader, HD Kumaraswamy, pitched his lot with the Congress to present a combined tally of 115 seats. Knowing from recent experience that BJP President Amit Shah has the Midas touch when it comes to getting MLAs to switch sides by hook or by crook and to turn a legislative minority into a majority, the Congress whisked away its MLAs to a five-star resort, but not before some high drama when HAL airport authorities refused permission for the chartered aircraft to take off, leaving the pampered MLAs to travel in a convoy of luxury buses.

The drama began as a head count was taken to see if any MLAs were missing–panic set in when one was declared absconding, only to be found taking a dip in the pool.  The tension carried on and was only broken when the resort owner jokingly declared that he had 117 MLAs with him and he should be made chief minister. Unlike in Goa and Manipur, this time, however, the Congress was well-prepared. A battery of its legal luminaries led by Abhishek Singhvi approached the Supreme Court which saved the day for the Congress, and for democracy. Refusing to agree to governor Vallabhai Vala’s 15-day grace period for Yeddyurappa to prove his majority on the floor of the House, it ordered a floor test within 24 hours.

Knowing that he would not be able to get the nine extra MLAs needed, Yeddyurappa resigned ahead of the floor test. Earlier in the day, the apex court had rejected the Congress-JD(S) petition to remove KG Bopaiah as pro-tem speaker ahead of the floor test and appoint the seniormost legislator, RV Deshmukh, in his place. Lawyers Kapil Sibal and Singhvi questioned his suitability for the post and quoted his past record, referring specifically to an earlier stint when his action of expelling 13 JD(S) MLAs had invited the wrath of the apex court.

When the lawyer duo brought up the matter this morning, the Court said it could be taken up, but the floor test would then have to be postponed. The lawyers immediately withdrew their petition. They then demanded that while Bopaiah be allowed to administer the oath, he be refrained from conducting the vote for which another pro-tem speaker be named. The Court’s answer to this was that it did not have power to say who should be speaker. The legal team then asked for live telecast of proceedings, to which the additional solicitor general assured the Court that the government had facilitated all national and Kannada channels live coverage of the proceedings of the assembly. 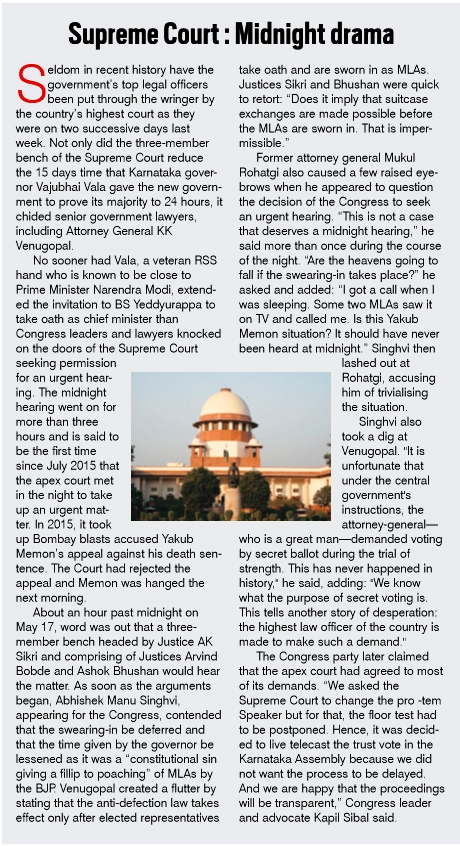 In the end, the calculations and machinations of the BJP’s magic duo of Narendra Modi and Amit Shah went awfully awry. Yeddyurappa was floored by the sheer logistic skills of the Congress-JD(S) combo that held on to its legislators across hotels in Karnataka and Telangana. Until yesterday, Yeddyurappa was hopeful of cobbling up the numbers from the Congress and the JD(S) thanks to the 15-day window that Vala gave him when he invited him on May 16 to form the government on the basis of being the leader of the single largest party. But thanks to the Great Wall that the Congress-JD(S) parties built for themselves, the BJP could not breach it, although it made several attempts to do so.

More than the political acumen or skulduggery that the Congress or the JD(S) may claim to have, it was the timely intervention of the Supreme Court that brought the smiles back on the faces of the new chief minister hopeful, Kumaraswamy, and the Congress legislators who are hoping to get some of their portfolios back.

The BJP did not have the numbers in the first place, but the governor, an old associate of Modi from Gujarat, gave the party a long rope. The numbers were stacked against him: the Congress-JD(S) had stitched up a post-poll alliance and had the requisite majority to form the government but the governor spurned their offer to parade their numbers.

The BJP did not expect the Congress to knock on the doors of the Supreme Court in the night as the governor’s letter to Yeddyurappa had asked him to take the oath of office the next morning in a plan that was hastily put together by what in Karnataka has come to be known as the 3Gs (three Gujaratis: Modi, Shah and Vala).

BJP lawyers tried hard to borrow time from the Supreme Court but the judges heavily sliced the 15-day window to just 24 hours, leaving little time for logistics experts to mop up the additional numbers needed to win the floor test. There were hopes of members cross-voting or abstaining from the vote of confidence, but the Congress had logistics experts like DK Shivakumar who ensured that the flock stayed together.

Shivakumar, in fact, is the most networked man in the state. He is the go-to man in a crises. In August last year, party chief Sonia Gandhi tasked him with keeping  Gujarat MLAs safe in Bengaluru to help her close aide Ahmed Patel win the Rajya Sabha election in Modi’s home state. Patel won, thanks to Shivakumar’s organisational skills. But his skills were rewarded with raids from the central government agencies like the IT and the ED. But once again, it was his organisational skills that came in handy for the Congress.

The Congress also played its cards close to the chest: it sprang up surprises that caught the BJP managers unawares. “We wanted to keep some things as a surprise till the last minute so that the other side is caught unawares,” former home minister and Congress legislator Ramalinga Reddy said. Reddy’s daughter Sowmya is hopeful of winning the June 11 assembly polls from Jayanagar after the election was countermanded with the death of the BJP candidate there. The rabbits that the Congress pulled out of its hat on the day of the floor test included audio clips featuring BJP leaders reaching out to Congress legislators with offers of money and ministerial posts. In one clip, Yeddyurappa is heard luring Congress MLA BC Patil to cross over to his side. In another clip, two BJP leaders reach out to another MLA’s wife over the phone with a promise of liberal funds.

JD(S) supremo and former prime minister HD Deve Gowda,  who was celebrating with his 85th birthday at the Tirumala temple on May 18, could not have got a better birthday gift than having his political bete noire paving the way for his son Kumaraswamy to take over as Karnataka’s 30th chief minister.