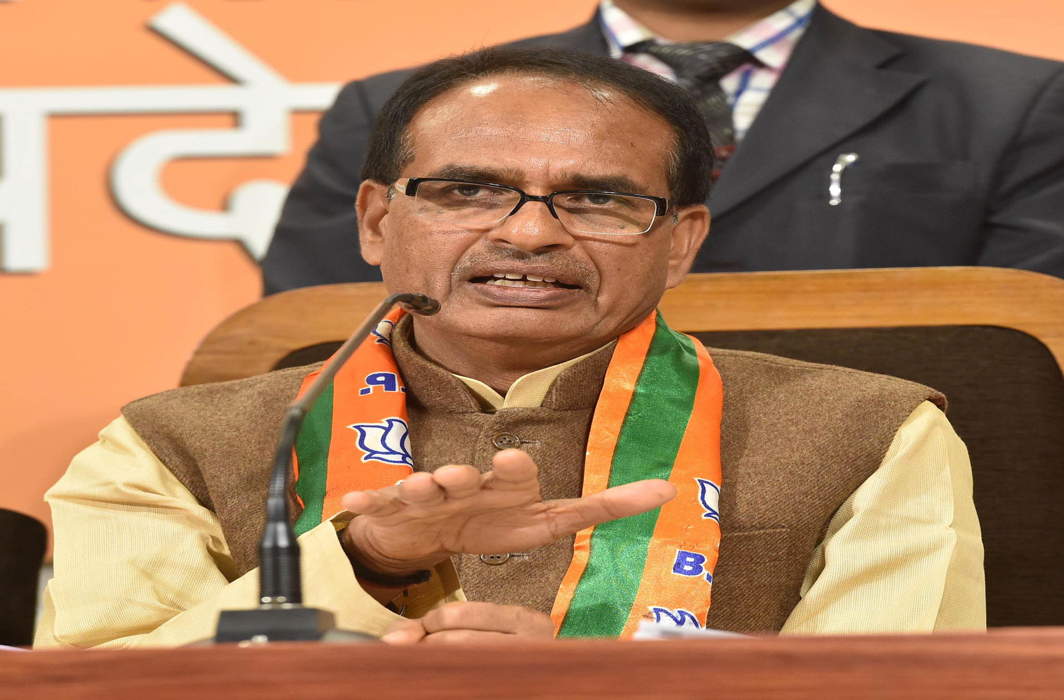 Above: MP CM Shivraj Chouhan bestowed “eminence” on his predecessors so they could retain bungalows/Photo: UNI

Despite court orders to evict them from official accommodation, former CMs, often aided by the government, find ingenious ways to stay on

In his 13 years as chief minister of Madhya Pradesh, Shivraj Singh Chouhan has courted a fair share of controversy but now, as he prepares to lead the BJP in the assembly elections due later this year, he finds himself embroiled in one of his own making that pits him against the judiciary. Last week, the CM used his discretionary powers to override a high court judgment and re-allot government bungalows to three former BJP chief ministers—Kailash Joshi, Uma Bharti and Babulal Gaur—by designating them “eminent citizens”. He did this just days after a division bench of the Madhya Pradesh High Court held Section 5(1) of the MP Mantri (Vetan Tatha Bhatta) Adhiniyam, 1972 “unconstitutional” and passed an order to get the four ex-CMs’ bungalows vacated.

Chouhan circumvented the Court order for the three ex-CMs but denied the benefit of his discretionary powers  to another ex-CM, the Congress’s Digvijaya Singh, on the ground that, unlike the other three, he refused to apply for change in his social status as an eminent citizen.

Rajinder Kumar Bhattal had one of the shortest tenures as chief minister of Punjab. She was in office for 82 days during 1996-97, yet she had one of the longest stays in a government house located in a prime locality in Chandigarh.  The sprawling bungalow, next to the official residence of the chief minister, was retained by her even after her Congress party lost the assembly elections in 2007. The bungalow is meant to be reserved for the deputy chief minister or the seniormost minister in the government. She continued to reside in the bungalow and attracted headlines due to expenditure on construction of a swimming pool on the premises, till the eve of the 2017 elections. She was forced to vacate the residence and shift to a smaller government house, to obtain a no-dues certificate to become eligible to contest the elections. She had to cough up Rs 84 lakh to clear the dues.

On May 7, a Supreme Court ruling made some VVIPs in Uttar Pradesh uneasy. It said that former chief ministers will have to give back the bungalows allotted to them by the state government after they demit office. The order stripping the former CMs of special privileges and striking down the provision of accommodation to them came as a bolt from the blue for the six former CMs—Mulayam Singh Yadav, Mayawati, Rajnath Singh (now Union home minister), Kalyan Singh (currently Rajasthan Governor), Akhilesh Yadav and ND Tiwari.

Akhilesh and father Mulayam moved the Supreme Court, seeking time to vacate the residences allocated by the state government to them during their tenure. Akhilesh requested the court to give him time to make alternative arrangements, and Mulayam sought exemption on grounds of security, age and ill-health. They withdrew the petition in July after duly complying with the SC’s orders.

Whatever the political differences, what unites politicians, cutting across party lines, is their dogged determination to stick to their fancy official accommodation long after they have demitted office.

The problem is widespread, both at the centre and at the state level. While the centre has taken tough measures to evict VVIP squatters in the last two years and is looking at enacting legislation to evict such people, the problem is more complicated in the states, particularly in the north, where the courts had to step in after the squatters—often aided by the government—found ingenious ways to stay on happily forever.

Bhattal’s is a case in point. It is 21 years since she was CM, but continues to live in the bungalow allotted to her. The SC order of May 7 made little difference to her as the Capt Amarinder Singh government appointed her vice-chairperson of the state Planning Board, a post that carries the pay and perks of a cabinet minister and entitles her to retain the government house.

In Haryana, which also has an earmarked residence for the chief minister, there has been no instance of the outgoing chief minister occupying the official residence. But former Chief Minister Bhupinder Singh Hooda made a provision for government residences for former chief ministers a few months before he led his party to defeat in the assembly elections. However, Chief Minister Manohar Lal Khattar, who is the first-ever BJP chief minister of the state, abolished the clause soon after he took over the reins of government.

For sheer audacity, there’s none to match Chouhan who placed three of his predecessors from his party on the eminent category list to enable them to retain their bungalows. Former state Advocate General and Congress Rajya Sabha member Vivek Tankha has dubbed the CM’s decision contempt of court and said he will file a petition in the apex court in this regard.

Sources in the government said as Digvijaya did not move an application for re-allotment of a bungalow to him, his name was not considered for it (according eminent citizen status). Former CMs Joshi, Gaur and Bharti were expected to vacate by July 19 the government bungalows they had been occupying long after they demitted office. But thanks to the “eminence” that was suddenly bestowed on them, they continue to stay on.

In his application, Joshi, a former Lok Sabha member from Bhopal, said he was an active social worker for a long time. Joshi’s son, Deepak, a minister in the Chouhan cabinet, has another big bungalow in the same locality. Earlier, speculation was rife that the senior Joshi, who is neither an MP nor an MLA nor an office-bearer in the BJP, would move to his son’s house following the High Court order.

Bharti, who is an MP from Jhansi in Uttar Pradesh, said she is domiciled in MP and had been an MLA and CM. Bharti had earlier publicly said she had no intention of retaining the official house. She had reportedly asked her supporters to look for alternative private accommodation for her in Bhopal. La-ter, she decided to stay put in the house.

Gaur said he is the senior-most legislator representing Govindpura assembly segment for the last 35 years and, therefore, should not be asked to vacate the house he is occupying.

A couple of years ago, the MP Assembly had amended legislation to provide lifelong government accommodation, salaries and perks to former CMs on a par with current ministers.

The three former chief ministers may have retained their bungalows but the way they made the chief minister manipulate the High Court order for their selfish end has lowered their moral standing in the public eye. The issue is likely to haunt the BJP in the forthcoming assembly elections.

It was in 1980 that the trend of allocating bungalows to former CMs in UP began. The Allahabad High Court decided against this in 1997, which led to the relocation of a list of ministers such as VP Singh, HN Bahuguna, Shripati Mishra and Kamlapati Tripathi. The alliance of Mayawati and the BJP brought a new impetus to this issue by introducing the Ex-CM Residential Allotment Rules, 1997 which served as a housing solution for former CMs. This provided relief to the likes of Ram Naresh Yadav, Tiwari, Rajnath and Akhilesh.

Mayawati used to reside in a bungalow of 2,164 sq m in the Mall Avenue area of Lucknow. The house was built after combining several plots. Mulayam’s “palace” covers around 2,436 sq m. While Akhilesh served the majority of his stint with his family in this house, he moved out to a 1,535-sq-m bungalow just before the elections. Surprisingly, Tiwari, Kalyan and Rajnath resided in comparatively smaller bungalows. Rajnath resided in a “modest” 750 sq m house.

These bungalows constitute luxurious accommodation. Mulayam, Mayawati and Akhilesh have enjoyed lavish lifestyles in their bungalows. According to a report in 2012, the construction and finishing of Mayawati’s house cost Rs 86 crore. Akhilesh broke this record and spent Rs 100 crore on his bungalow.

According to the rules, the state property department can spend only Rs 25 lakh on the reconstruction and maintenance of bungalows of former CMs. The approval of the cabinet is necessary for anything over this amount. The basic monthly rent of these bungalows is only Rs 4,212. Ironically, their residents were all regular defaulters in payment of electricity bills. After Akhilesh lost the assembly election in 2017, it was revealed that Mulayam owed lakhs as electricity bill arrears.

These VVIPs are also “distressed” about another matter. Through its order, the apex court stripped them of their VIP status and equated them with ordinary citizens. The response of the state government to the verdict has not been encouraging and it is being predicted that it will make an effort to stop its implementation. Even in the Supreme Court, the state government had furnished arguments in favour of their occupying these bungalows and said that, in a democratic country, those who occupy high positions are given many facilities even after leaving office.

Judging from its statement in the court and the rather muted response to the verdict, it seems that the Yogi Adityanath government is not very different from the previous governments in this matter.

The future will tell whether it gives greater importance to protecting the larger rights of its citizens or to petty political interests.

—With Vipin Pubby in Chandigarh and Govind Pant Raju in Lucknow