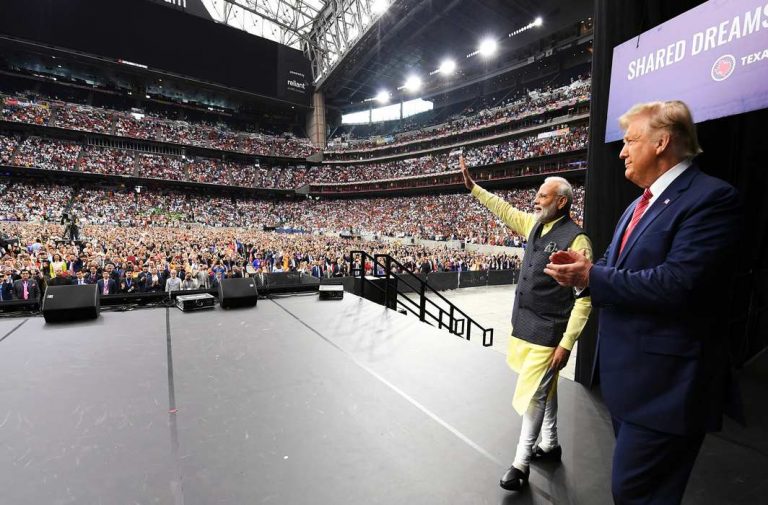 Prime Minister Modi’s grand spectacle in Houston on September 22 and his informal summit with President Xi Jinping at Mamallapuram on October 12 symbolise India’s global influence as well as his own stature as leader. Both events, but particularly the latter, signified India’s ability to transcend differences, as emphasised by the Chinese media, and to optimise convergence of interests. However, there is merit in the argument that favourable geopolitics and smart diplomacy are no substitute for good governance in India’s quest for great power status.

The head of the world’s most powerful nation played second fiddle in his own country when 70,000-strong crowds – the biggest ever to assemble in the US for a visiting dignitary other than the Pope – cheered and listened to Modi at Houston’s NRG stadium. The US decision to hike duties on Indian steel and aluminium and withdraw GSP for Indian exports did not appear to have affected the personal bonhomie between the leaders of the world’s two largest democracies. Showering the Indian-American community with effusive praise for their positive contribution to US society, President Trump emphasised his own endeavours to boost Indo-US trade and defence ties. He specifically highlighted US support for the Indian space programme and mutual efforts to curb terror, to delight of the Indian audience.

Local media reported that President Trump made good political capital out of the event, which could shore up his support within the Indian-American community in the upcoming presidential polls. His quip ‘Abki baar Trump Sarkar’ (This time Trump Government) summed up this underlying sentiment and his eagerness to borrow Modi’s winning formula.

Details of the outcome of the Mamallapuram summit can never be known, although Foreign Secretary Gokhale assured the media that Kashmir, as an internal matter for India, was not discussed. This was significant, given President Xi’s meeting with Pakistani PM Imran Khan in Beijing hours before embarking on his India tour. Military-backed Khan, who emerged victorious following a dubious 2018 poll, has been seeking to exploit unease in the Kashmir valley. By projecting the abrogation of Jammu and Kashmir’s special status as an assault on Muslims, he has not only attempted to whip up nationalist sentiment at home but also sought, albeit with negligible success, to make common cause with Muslim nations.

The Chinese media hailed the Xi-Modi summit as a ‘new beginning in bilateral cooperation’ that would provide ‘stability and positive energy to the current world, full of uncertainties’. Many among them appreciated India’s decision to consolidate trade and other ties, despite choosing to stay away from China’s Belt and Road Initiative (BRI).

A closer look, however, suggests that India’s ability to garner dividends from such diplomatic successes and geopolitical influence remains limited. India has continued to slide over the past decade or so on most governance parameters. What started with the exposure of corruption and scams in the UPA era has now taken the form of serious all-round economic decline and uncertainty. The gap between India’s potential and its actual progress towards great power status has never appeared wider.

Despite promising to be in the same league as China until a decade ago, India now looks a minnow by comparison. China’s five times bigger economy (nearly US $14 trillion compared to less than $3 trillion for India) does not adequately sum up its superiority in technological excellence and innovations. Chinese R&D investments are gradually getting closer to those of the United States, with many of its institutions of excellence pushing frontiers of knowledge. Its advances in artificial intelligence, space technologies and 5G internet services or rapid strides in human development, public infrastructure, fintech and military modernisation have taken it on a different trajectory. Comparable figures of India’s economic growth do not tell the real story.

India, accounting for barely over 2 per cent of total world trade, with a significant deficit and a high share of primary products in its exports, is nowhere close to the 12.5 per cent share of China, with a considerable surplus of exports dominated by manufactured goods. The volume of Indo-US trade in 2018-19, amounting to US$ 86.9 billion, with a surplus of $16.9 billion in India’s favour, pales into insignificance when compared to US-China trade of $737.1 billion, with $378.6 billion surplus for China. For the US, India is hardly a serious trade partner, given that the volume of its trade with Canada, the EU and Japan stands at $627.8 billion, $575 billion and $217 billion respectively. Similarly, Sino-Indian bilateral trade of around $95 billion, which is heavily skewed in favour of the former, is much smaller compared to that of China’s own trade with Germany, Japan, Hong-Kong and others. That said, India still remains a profitable market for China.

China may not be able to surpass the economic, military and technological might of the US in the foreseeable future. But it has increasingly carved out, and continues to expand, much larger domains of influence. These are manifest in its rising global footprints from Oceania, the Far-East to the West of Asia, almost all of Africa and South America, and parts of Europe. Its initiatives, varying from the BRI, Asia Infrastructure & Investment Bank (AIIB) and the Shanghai Cooperation Organisation, have registered significant global influence.

Many in American policy establishments, who in the past pushed for deeper strategic ties with India, insist that US commitment to India must go beyond reciprocity in tactical matters. India is in no position to act as a countervailing influence on China, nor should US policy aim at that. The rise of a democratic India as a bigger stakeholder in the global order will have a stabilising impact in the context of China’s aggressive expansionism. In this context, the US establishment shows greater understanding towards India’s freedom to conduct its relations with others, including its traditional friend Russia or others in Asia and beyond.

Simultaneously, there are elements in the US, albeit smaller in number, who do not favour any accommodation to the world’s biggest democracy in matters of trade. India, however, appears confident dealing with such duality. At the India-US Strategic Partnership Forum in New Delhi on October 21, Foreign Minister Jaishankar gave assurances that Indo-US ties were strong enough to resolve differences on trade.

There has been considerable discussion in the Indian media, as well as efforts on the part of the government, to de-hyphenate India from Pakistan. This is not possible without destroying the Pakistani capacity for covert and proxy war by invoking Islam. Pakistan is probably a unique territory whose state power, including the armed forces, is controlled by syndicates who have little commitment to their own people. They have been privately thriving on all shades of transnational crime, from money laundering to illicit trade in narcotics, arms and fake currencies, among others. Jihad and Kashmir provide a strong smokescreen for pursuing such activities. The integrity and professionalism of India’s governance institutions are prerequisites for destroying the space for covert war on our own territory.

Chinese support for Pakistan, to pre-empt any possible – but currently non-existent – competition from India could potentially backfire quite severely in the long run. Radicalisation and subversion in the name of Islam may hit well beyond Uyghur-dominated Xinjiang if these build a strong momentum. This will certainly impede CCP’s pursuit of the resurrection of the glorious civilisational state of China.

On the other hand, India has to go beyond minor tweaks in policies or tactical initiatives to bolster its institutional capacity of governance. Sustained and comprehensive reforms are compulsory if enduring solutions are to be found to the fledgling economy, rising unemployment, deficient human capital, poor infrastructure and technological stagnation, or even the larger menace of corruption that has been eating away at Indian society and the economy like termites.

India’s status-driven generalist civil service may have multiple examples of individual brilliance. But it is ill-equipped to translate policy visions into reality. Tortuously slow and highly unpredictable judicial processes can neither ensure observance of the rule of law nor promote trust in contracts. Advancement of knowledge and technological innovation require an ambience of congeniality within institutions of excellence rather than obtrusive control. The most serious structural reforms are probably required in India’s corporate sector, to optimally generate wealth and create jobs.

This is simply not possible if political parties do not transition into credible platforms for right talent and instruments to aggregate powerful ideas for better governance. A free media is useful only of it throws up facts and enlightened perspectives impartially and with integrity. The current dynamics of market and democratic instruments appear incapable of making any headway in this direction. Nevertheless, Prime Minister Modi has the mandate and global standing to script a newer history beyond textbooks.

India’s governance challenges are unique, as is its wider social and economic context. It has to explore a model of democratic governance beyond what is known in the West, but Chinese authoritarianism simply goes against the grain of Indianism.

The resurrection of a civilisational state of India along modern scientific lines, but incorporating some of the essential ingredients of ‘Dharma’ – right selfless conduct or integrity – is critical, not only to address the aspirations of 1.3 billion Indians. It is also indispensable for stability of wider global equilibrium. History rarely offers such opportunities for human ingenuity and initiatives that are available to India at this juncture.