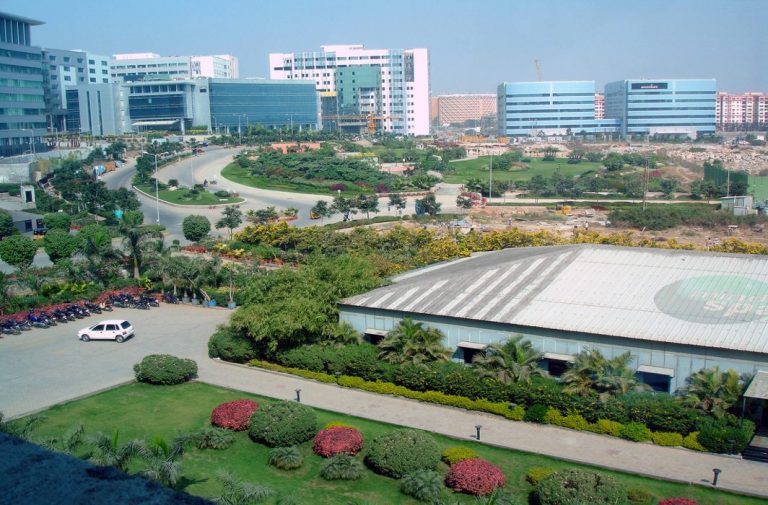 Above: HITEC IT Park in Hyderabad

The swanky campuses of IT firms hide the harsh reality of pink slips and bouncers who get unwilling employees to resign. They have now formed a forum and gone to court to take on these companies

~By Kingshuk Nag in Hyderabad

With cut rocks, swanky campuses, lakes and stylish high rises, Nanakramguda in Hyderabad is a place quite distinct from any other part of the erstwhile city of Nizams. Not surprising considering that it is the financial district of the city with top IT companies, including global names, being located here. It is early days still, but something is threatening the idyllic environment of Nanakramguda.

Last week, the Forum for IT professionals held their first convention in the city—the first by a platform launched by techies to demand their rights. “We have started recently, but now have over 100 members and some 70 attended the convention. It was to apprise techies about their rights and ensure that they are not discriminated against,” says Praveen Chandrahas, secretary of the Forum to India Legal. “We told them that there is nothing in law that prevents them from forming unions. IT companies give a different impression to their employees from the day they join the company,” he added.

The compelling need to form the Forum has been the spate of sackings in IT companies in Hyderabad in the last year and a half. In 2017-18, 30,000 techies lost their jobs in Hyderabad, while one lakh lost them nationally during the same period. This involved top companies like Cognizant Technology and Verizon among others. Sacked employees have alleged that they were virtually at gunpoint forced to sign on the dotted line and quit their employment. It has been alleged that in one particular company, bouncers (who are deployed by pubs and bars to throw out unruly customers) were pressed into service to get unwilling employees to resign. The petrified employees were too scared to even complain about this intimidation to the police.

However, later, some sacked employees filed writ petitions in the High Court, which are still being heard. A few employees also moved the Telangana Labour Commissioner for justice. The Labour Commissioner ruled in favour of eight employees of Cognizant who had complained about their forced resignation and asked the management of the company to have “one to one discussions” to resolve the issues. “This, however, does not mean anything. If the company wants to sack you, it takes recourse to other methods to purge you,” says Harish Chandra (name changed), a techie. “No one wants to raise a shindig because they fear that their future prospects will be affected,” he added.

It is not Hyderabad alone where techies are in a mood to set up a common platform to ventilate their problems and offer succour to each other. The trend started from Chennai where techies were rudely shaken when Tata Consultancy Services began to get rid of excess staff in November 2014 and continued next year. As per media reports of that time, most of those axed—with one month’s salary—were associate consultants. Typically, they had around seven years of experience and many of them had started their career in TCS and had worked nowhere else. It transpired that most of those axed had been graded “C” in their performance appraisal—which translated into “meeting expectations”.

This, in turn, implied that they had met 100 percent of their targets. Even as the official reaction of TCS was not found to be satisfactory by the employees, they formed the Forum for IT Employees (FITE). The Forum took recourse to many moves, including petitioning the union government on Org.change and questioning TCS about their policies. They asked whether the IT industry operated on some other planet that normal labour laws would not apply to them. Besides setting up a legal support base for affected employees, the FITE was vociferous that companies resorted to “discrimination” and “subjectivity” in evaluation of employee performance with a view to get rid of them. They also want companies to set up skill upgrade modules for techies. The petition to the prime minister said: “Thousands of employees have been sacked suddenly and thrown out of office leaving them no buffer to search for alternatives.” It alleged that “no legal mandates with respect employee rights were followed by IT companies”.

Of a total of four million employees in the Indian IT and IT-enabled services, 1.5 million are estimated to be based out of Bengaluru. Little wonder, then, that the brunt of downsizings in the IT industry has been felt the most in the Garden City and the reactions from employees have been seen here the most. Supported by the CPM-led Centre for Indian Trade Unions (CITU), the Karnataka State IT/ITES Employees Union was formed and the labour commissioner of Karnataka has now officially recognized this union under Trade Unions Act 1926 and the Karnataka Trade Union Regulations, 1958.

Although technically, this has on paper brought in more bargaining power for techies, company representatives don’t think this will work. “Techies are not blue collar workers doing manual work like labour in the manufacturing industry who can resort to strikes and stop production. I don’t think this will work in the IT industry,” says KS Narhari, former senior director of Texas Instruments (the first IT MNC that led to its rise as the Silicon Valley of India). “Digital automation and artificial intelligence are leading to a lot of change in the industry. Re-skilling is required and a lot of techies with old skills are becoming redundant,” he said.

Added to this is the move by US President Donald Trump to create more jobs in that country. “Many more small development centres are coming up in American cities and they are manned by Americans, not expatriates from India. This is creating more pressure for jobs in India because more development centres in the US means less outsourcing to countries like India,” points out Mahesh B (name changed), an Indian techie in San Jose. Thus, Indian IT companies, like in Alice in Wonderland, have to run faster and faster to stay where they are.

Analysts point out that it is unfortunate that there is a face-off between IT companies who are trying all ways to remain competitive (and thus are resorting to lay-offs albeit in a none too civilized manner) and techies (who are getting the wrong side of the stick for no fault of theirs).

In such circumstances, it is the government that must play the role of mediator. However since 2000, governments across the country have viewed IT investments in their state as a matter of prestige. They have lavished generous incentives (including land far beyond requirements to house software development centres) to attract these companies to their states and have given them a free hand to run their companies. After raising them to the skies, the state governments find themselves quite powerless to deal strongly with them. “What can we tell them? The brand image of these companies become so strong and they have become larger than life. They take offence to any advice given to them and justify everything in the name of globalization,” laments the IT secretary of a southern state. He however admits that his state government (and others) are still wooing IT investments and this reduces the leverage they have over these companies.

Perhaps it’s time that the IT industry is looked at like any other business and accordingly dealt with.