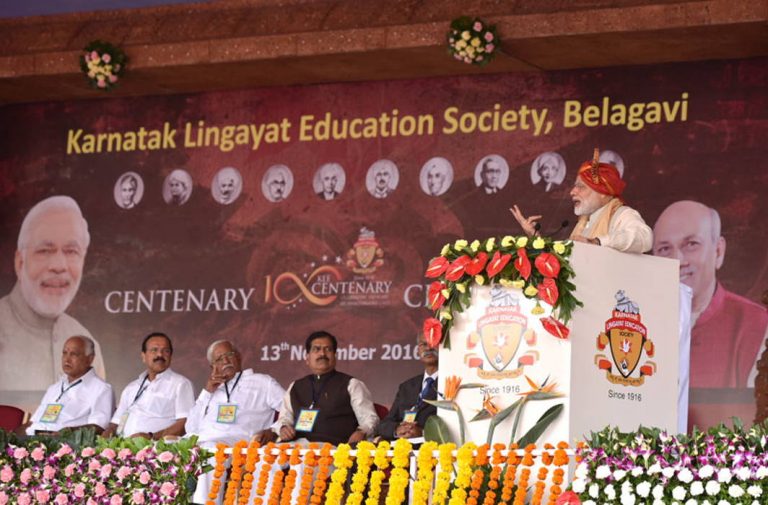 Above: Prime Minister Modi with prominent Lingayat leaders at a function in Belagavi, Karnataka

As political parties spar with one another to capture power in Karnataka’s five bypolls scheduled for November 3, the Congress finds itself on a sticky wicket over the previous Siddaramaiah-led government’s decision to grant minority status to the state’s largest community, the Lingayats. They comprise about 17 percent of Karnataka’s 60 million population.

Medical Education and Water Resources Minister DK Shivakumar, the Congress’ key trouble-shooter, got into trouble when he announced at a public meeting in mid-October that “the previous government’s move on the religious minority status for the Lingayat faith was a big blunder”. In one masterstroke, he earned the praise of a prominent Lingayat leader, state BJP chief and three-time Chief Minister BS Yeddyurappa, who concurred with his view. Several petitions have already been filed in the Karnataka High Court regarding a separate religious tag for the Lingayats.

Shivakumar chooses his words and times them carefully. His masterstrokes were evident when he ensured the election of senior Congress leader Ahmed Patel to the Rajya Sabha and when he shepherded the Congress-JD(S) flock together to make the JD(S)-Congress coalition government a reality in May.

Lingayats are traditionally the followers of 12th century social reformer Basaveshwara, who had called for a casteless society and ushered in principles of democracy, social justice and equality. For almost 40 years now, some members of the Lingayat community—cutting across political lines—have been seeking a minority status, but in vain. Several representations were made to the Congress government headed by Manmohan Singh and to its political leaders. These included Lok Sabha leader Mallikarjun Kharge, Veerappa Moily and K Rahman Khan (former deputy chairman of the Rajya Sabha). Several petitions were submitted under the umbrella of the All India Veerashaiva Mahasabha (AIVM), an organisation founded in 1904 that claims to represent almost 40 million Veerashaiva Lingayats spread across south India.

Eshwar Khandre, secretary-general of the AIVM, and working president of the Karnataka Congress, told India Legal: “Ours has been a constitutional and lawful demand for several decades.” Since 1978, the AIVM has been requesting the Registrar General of India (RGI) and the census commissioner to assign a code number for a separate religion on a par with the other six religions—Hinduism, Islam, Christianity, Buddhism, Sikhism and Jainism—during census operations. In 2014 too, AIVM President Shamanur Shivashankarappa, a prominent Congress leader and educationist, had used his political connections to press for his community’s demand, but to no avail. After Shivashankarappa appealed to Sonia Gandhi in October 2013, she forwarded the detailed demand to then Union Home Minister Sushil Kumar Shinde.

Similar recommendation letters were also written to the home minister in the Manmohan Singh cabinet by Kharge, Moily and Rahman Khan. Moily had told the PM that the demand was justified and “it is a definite faith as enshrined in the philosophy, preaching and the lifestyle” and that the PM “may consider the request and grant them the long demand for a separate religion”. Khan wrote to Shinde in February 2014:  “Veerashaiva Lingayat is an independent religion…there are sufficient records, literature, sculptures and legal evidences which are available to prove that this religion is an independent, self contained and distinguishable religion and is entirely different from Hindu religion. The ministry of social justice and empowerment has included 31 Lingayat sub-castes in the OBCs list of Karnataka for the purpose of reservation in civil posts and services under the Central Gove­rnment….Kindly advise the Registrar General and Census Commissioner to provide separate code number/abbreviation in religion column for enumerating Veerashaiva Lingayat religion separately during census operations on par with other religious minorities.”

Former Higher Education Minister of Karnataka Basavaraj Rayareddy was among 56 legislators and MPs from the Lingayat community who had petitioned Manmohan Singh on this issue. He told India Legal: “Our demand has nothing to do with Siddaramaiah. It is what we have been seeking for a long time and Shivakumar made a big blunder by opposing it now.”

Shivakumar, however, is unfazed. A prominent leader of the Vokkaliga community, he is biding his time to become the chief minister some day. He has patched up with his archrival, HD Kumaraswamy, and has the blessings of the biggest pontiff of his community who called on Prime Minister Narendra Modi on October 24, setting some tongues wagging. Faced with raids from the IT and the ED from time to time, Shivakumar knows the political expediency of being in the good books of leaders and gurus who matter. “I have been saying what is true from my conscience. I am not there to please any seers or any community. I have said only what is right,” he said. And he has the previous Congress government’s track record at the centre to prove that.

Despite all these pressures, the home ministry and the RGI have not responded favourably to the community’s demand. As early as July 1980, then RGI P Padmanabha had maintained that “allotment of a separate abbreviation for Veerashaiva Lingayat… is difficult to do so now”. In 2013, when the Congress was in power at the centre, the RGI office took the view that “Veerashaiva Lingayat is a sect of Hindu religion and not an independent religion”. Another reason given for not considering their demand was that all Scheduled Castes (SCs) professing the Veerashaiva Lingayat sect would lose their constitutional status as SCs can only be from the Hindu, Buddhist and Sikh religions.

Karnataka has seen more than a dozen chief ministers from the Lingayat community. Yeddyurappa’s main vote bank is from this community, which is why his party leadership finds it difficult to edge him out even though he lost his chance to become the CM narrowly.

Siddaramaiah, a member of the Kuruba community, took a gamble by deciding in March 2018—just ahead of the assembly polls—to recommend to the centre that the religious minority tag be granted to the Lingayats. And that is why he has not been able to figure out why many of those actively involved in the separate Lingayat religion movement bit the dust in the polls. The BJP leveraged the Siddaramaiah government’s move to cook up an issue that the Congress was dividing society. In private, some minority leaders are also apprehensive of the state’s largest community bloc eating into the benefits that are now accorded to minorities.

With the matter now before the courts, the future lies in the hands of the electorate who will cast their votes in the November 3 bypolls for five assembly and Lok Sabha seats. Will the Congress stock rise or will the BJP leverage this controversy to come back to power? “This is like a practice session before the final match,” said one BJP leader. “We are testing the waters before the 2019 Lok Sabha polls. We don’t want to upset the majority community in any way, but we will see how people react to such controversies.”

In India, religion means everything.