The petition wants Supreme Court to examine if they were allegedly paid in the deal to influence the government. Will more skeletons tumble out of this closet?

Did some journalists lobby in their publications in return for the hospitality and pay-offs given by Italian firm AgustaWestland and its parent company, Finmeccanica, in the multi-crore chopper deal? The Supreme Court is hearing a petition in this regard filed by veteran author and journalist Hari Jaisingh, who was an editor at The Indian Express and The Tribune.

The petition sought a court-monitored probe to investigate if journalists were allegedly paid to take a certain position on the AgustaWestland helicopter deal. Though the bench headed by Justice Dipak Misra did not issue a formal notice to the government, it gave a copy of the petition to Attorney General Mukul Rohatgi asking him to come back with a response by the end of February. 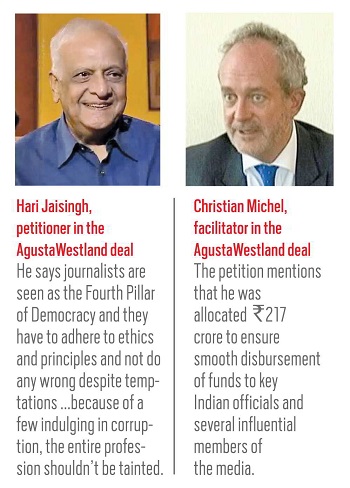 The Indian proposal to acquire 12 helicopters for VVIPs was cleared in 2010 by the Cabinet Committee on Security. Numerous changes were made in the specifications and after long negotiations, the deal was okayed. However, it was later cancelled. In August 2013, the Comptroller and Auditor General (CAG) unearthed several improprieties in the deal such as parameters being lowered so that the deal could come through. In fact, CAG had in a report to Parliament pointed out that significant departures were made from the established defence procurement procedure rules to award the Rs 3,727-crore contract for the helicopters.

Jaisingh’s plea was that the apex court should intervene in the ongoing investigation of the CBI and the Enforcement Directorate and direct them to investigate whether the Italian firm had paid journalists to influence the government into agreeing to the deal. He wanted the central agencies to give details in a sealed cover to the Supreme Court and get one of its retired judges to head a commission of inquiry to investigate allegations of corruption and influence-peddling in the Indian media and to suggest corrective measures to safeguard against such ills.

Geeta Luthra, senior advocate for the petitioner, told India Legal that the focus is to restrict the case to the role of journalists. “If we want honest and unpaid reporting, this is something all of us should be concerned about. If there is criminality involved of journalists being paid, they should be brought under the purview of the Prevention of Money Laundering Act under the amended Section 3. Those who received money should be investigated.”

The petition said a group of Indian journalists was taken on a fully-paid trip to Italy before the deal was finalised. The petition said a facilitator, Christian Michel, was allocated Rs 217 crore by Giuseppe Orsi, the CEO of Finmeccanica, and Bruno Spaglioni, the CEO of AgustaWestland, to ensure the smooth disbursement of funds to key Indian officials and several influential members of the media. Out of this amount, about Rs 50 crore was set aside to specifically manage the Indian media and Michel organized a trip for Indian journalists to Italy. One of the journalists on the trip is already being investigated by the Enforcement Directorate, the petition said.

Jaisingh said that there was no attempt by investigating agencies to go after Indian agents and journalists to locate the exact money trail. “The allegation of corruption by journalists acquires a distinctly sinister character since these quid pro quo transactions involve influence-peddling and are not immediately identifiable as criminal acts. There is direct evidence to suggest the involvement of certain Indian media persons and journalists who have taken pecuniary benefits from agents of foreign defence manufacturers. The Indian media has acted as a sentinel of democracy exposing wrongs and the mightiest persons for corruption and bribery. As democracy was founded on a system of morality and values, it cannot be left to the manipulation of crooks, scoundrels and unscrupulous vested interests,” he said.

Jaisingh told India Legal: “My only motivation to file this PIL was that if journalists were paid by the firm and they influenced the deal, then the public has a right to know. Journalists are seen as the Fourth Pillar of Democracy and they have to adhere to ethics and principles and not do any wrong despite all temptations and pressures. The media in India has done a great job after independence and just because of a few indulging in corruption, the entire profession should not be tainted. I just want the investigators to find out if they took the money that was allocated by the company to manage the media.”

The first allegation about the involvement of defence middlemen and payment of bribes emerged in February 2012. In February 2013, the Defence Ministry initiated action to cancel the contracts. The petition said that it was more than apparent that AgustaWestland had appointed middleman Michel for the express purpose of carrying out espionage in the Indian defence sector via some members of the media through their influential government links.

During this time, investigation of the chopper deal was handed over to the CBI by the Defence Ministry which had registered a preliminary inquiry against 11 individuals, including SP Tyagi, former Indian Air Force chief. The Court rejected a special investigation team probe into this case after the centre said that a CBI probe was already on. It remains to be seen how the government responds to the Court directive.