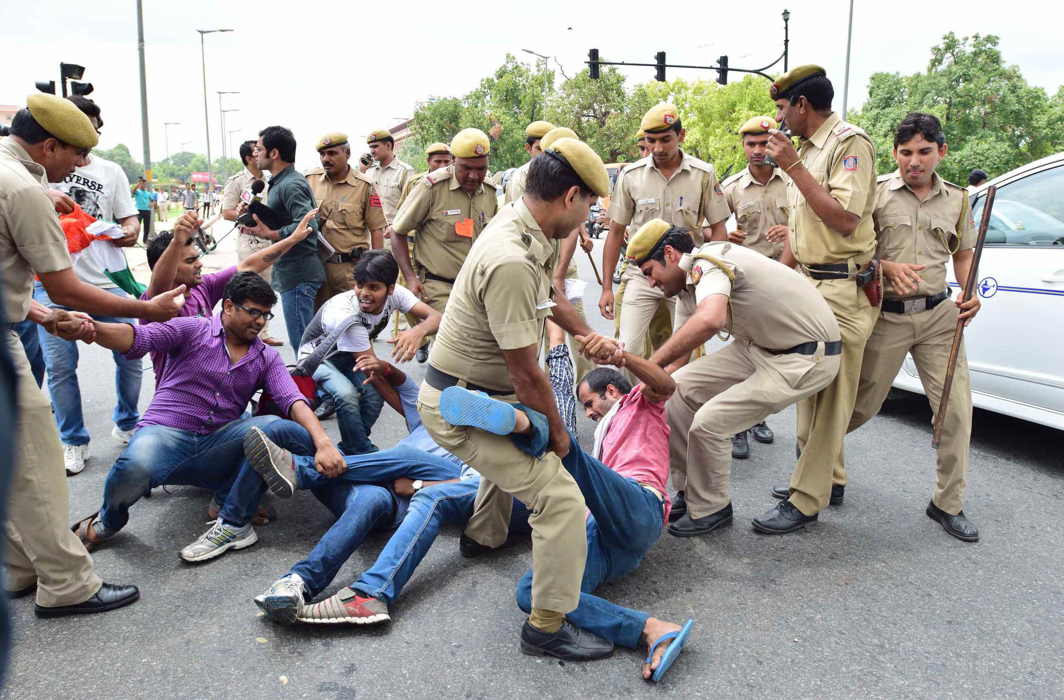 Above: Police trying to quell a student protest related to UPSC’s exams in New Delhi/Photo: UNI

There’s a reason why these words of John Woodburn, the British Governor of colonised Bengal between 1898 and 1902, and their reiteration by Andrew Fraser, president of the first Police Commission set up by the British in India in 1902, still haunt the venerable Prakash Singh, former director general of police of Uttar Pradesh, Assam and the Border Security Force.

“What Woodburn, Fraser and Lord Curzon had said over a century ago was about a police force helmed by the British and governed under an Act (the Police Act, 1861) that was drafted with the intention of using brute force to crush any resistance by Indians in the aftermath of the 1857 sepoy mutiny. It is a disturbing irony that these comments hold true in India even today,” Singh told India Legal recently on the sidelines of the launch of the “Status of Policing in India” report.

The voluminous report, compiled jointly by a prominent advocacy group and scholars at the Lokniti Programme of the Centre for the Study of Developing Societies (CSDS), is arguably the most thorough document in recent years on the status of policing across the country and the perceptions that common citizens have about the police. The study is the result of a painstaking analysis of annual reports filed between 2011 and 2016 by the National Crime Records Bureau (NCRB), the Bureau of Police Research and Development (BPR&D) and the Comptroller and Auditor General (CAG), complemented by surveys carried out across 22 Indian states. 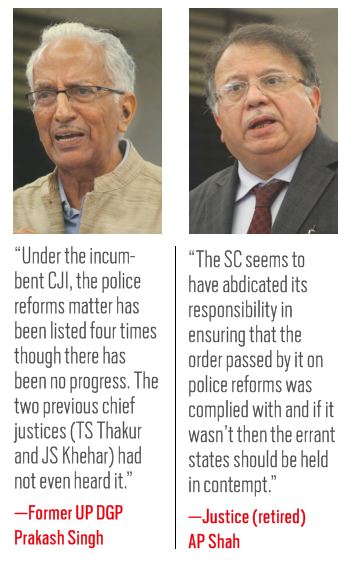 The findings of the report are a telling comment on the depressing state of the police force across the country and also raises a piquant question against the Supreme Court, which had in 2006, while delivering a verdict in a petition filed by Singh, laid out seven directives for police reforms. In the 12 years that have passed since that verdict, a majority of India’s states have not only failed to comply with the directives but have instead brought laws aimed at circumventing the judicial order.

The report covered 42 variables in six main themes of crime rate, disposal of cases by police and courts, diversity in the police force, police infrastructure, prison data and disposal of cases of crimes against SCs/STs/women and children. It confirms what had so far been in the realm of speculation—that Scheduled Castes, Scheduled Tribes and religious minorities feel unduly persecuted by the police administration—while also detailing how a majority of states had failed to fill the quota reserved for SC/ST and women candidates in the police force.

“Several studies in different states have been conducted on the disproportionate representation of minorities and vulnerable communities in the prisons. This has been found to be so particularly in the case of Muslims. When coupled with poor conviction rates and incidents of false implication, as recognised by courts, this points to a deeper problem of biases within the structure leading to hyper-incarceration of a particular section of the society,” the report states.

It adds: “In case of SCs, only four states (West Bengal, Uttarakhand, Punjab and Karnataka) out of the selected 22 have SC prisoners in proportion to or less than their population in the State; in case of STs, this number is three (Himachal Pradesh, Madhya Pradesh, Nagaland), and in case of Muslims, all 22 states have a higher proportion of Muslim prisoners than the Muslim population in the State.”

The survey commissioned by the authors of the report across 22 states (excluding J&K and some North-eastern states) to gauge public perception of various facets of policing shows that 38 percent of the respondents believed that the police often falsely implicate Dalits in petty crimes, Adivasis on the charge of being Maoists and Muslims in terrorism-related cases.

The report shows that only two (Punjab and Uttarakhand) out of the 22 surveyed states had met the reserved quota for SCs while six states (Bihar, Himachal Pradesh, Karnataka, Nagaland, Telangana and Uttarakhand) fulfilled the reservation quota for STs. However, when it came to filling the 33 percent quota for women, the all-India percentage was a “shameful” 7.3 percent as of 2016. The skewed women’s representation in police forces can be gauged from the fact that at 12.9 percent, Tamil Nadu had the highest number of women police personnel.

The survey also reveals that while the poor and the lower classes had the highest levels of distrust in the police, at 32 and 31 percent, respectively, the upper classes “even within the various caste-based distinctions weaved together, exhibited highest levels of trust”.

“The caste angle on its own also plays an important role in shaping public trust in police,” the report says, adding that STs were found to be most distrustful of the police at 37 percent, followed by OBCs at 30 percent and SCs at 29 percent.

Singh believes that many of these anomalies in policing could be corrected if the Executive in different states and the police force itself showed willingness to accept and implement the Supreme Court verdict in Prakash Singh vs Union of India, 2006.

Justice (retired) AP Shah, former chief justice of the Delhi High Court and former chairman of the Law Commission, told India Legal that while there is no denying that the states had failed to instill reforms in the police force, it is also a fact that the “Supreme Court seems to have abdicated its responsibility in ensuring that the order passed by it on police reforms in 2006 was also complied with and if it wasn’t then the errant states should be held in contempt”.

Singh said that the contempt pleas filed by him in the apex court against several non-compliant state governments were not even being taken up for hearing. “Under the incumbent Chief Justice of India (CJI), the matter has been listed four times though there has been no progress. The two previous chief justices (TS Thakur and JS Khehar) had not even heard it,” the retired IPS officer said.

With the apex court lackadaisical in ensuring that its orders are complied with, an Executive that seems only too eager to allow the status quo of poor policing to prevail and a public that continues to bear the brunt of these failures, Singh harks back to Woodburn and Fraser’s indictment of the lack of reforms in the police force during the Raj days. “It seems time has stood still for the police, doesn’t it?” he wonders.

Rajiv Gandhi assassin Perarivalan gets a week more on parole

The Supreme Court today allowed Rajiv Gandhi Assassination convicts AG Perarivalan an extension of a week of his parole, to visit the hospital of his choice. The court also said that no further extension will be allowed. Perarivalan has sought this parole for medical reasons.
Read more

While framing the rules, the government has to keep in mind that health is a fundamental human right, which has as its prerequisites social justice and equality. It should be accessible to all. Legal provisions are in place.
Read more