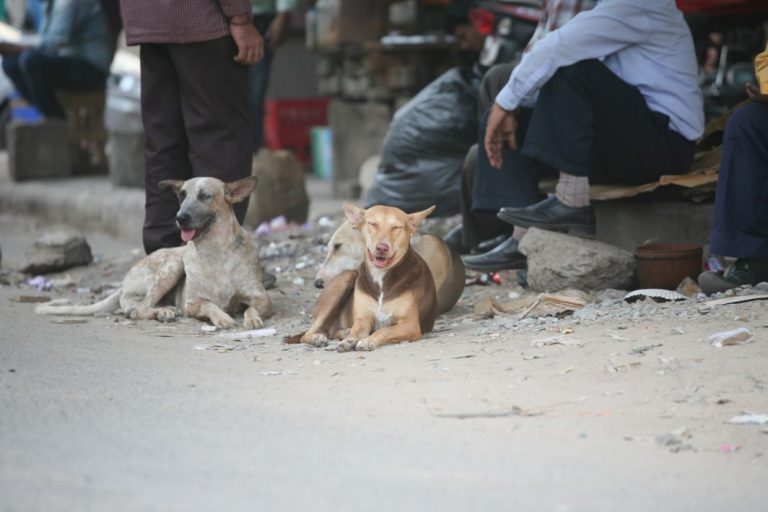 Above: Over 150 community dogs in Sitapur were killed under official orders after a spurt in canine attacks in the district/Photo: Anil Shakya

Man turned against his best friend in full fury, suspecting that it had killed innocent children in Sitapur district of Uttar Pradesh. With people believing that the strays had turned predators, they began hunting them down with bamboo sticks and guns and hanging them live from trees.

This led to dog lovers being up in arms. They contested the claim that a stray would behave in such a predatory manner when provoked or stressed. Upset, they went knocking on Supreme Court’s doors against the reckless and vengeful culling.

In a petition before a bench of Justices L Nageswara Rao and MM Shantanagoudar, dog lovers sought a direction to the UP government to ensure that no more community dogs were culled unless it was proved that they were behind the killing of children.

The petition alleged that the children could have been killed by some other wild animals, but indiscriminate culling followed after the Sitapur district magistrate’s statements in newspapers that stray dogs were behind the children’s deaths.

The petition, filed by advocate Gargi Srivastava, said: “Following such newspaper reports, indiscriminate and brutal killing of community dogs by hanging them alive, burying them alive, hitting them with lathis, leaving them to bleed to death in a pile of garbage and shooting them point blank started.

“This rampant massacre led to over 150 community dogs being brutally killed over a span of few days by not only the local people but also under orders of village panchayats, police officials, as well as the officers from district administration,” the petition claimed. It also reminded the Court of its November 18, 2015, order which directed all local authorities and panchayats not to kill stray dogs. The plea also claimed that a committee of animal welfare groups which visited Sitapur found that the district administration had abetted the massacre of strays.

The fear that gripped Sitapur villages appears to have dissipated, though there is no lowering of guard either by the people or the district administration. A district official said that culling had stopped. “There have been instances of culling, though the sterilisation process is on,” he said.

While the petition blamed the district administration of abetment, Sitapur district magistrate Sheetal Verma rejected the charge. In a newspaper report, Verma said: “All concerned are hereby informed that the district administration, Sitapur, is not involved in the killing and does not abet the killing of any animal, including dogs, by any means.” She insisted that surveillance teams and eyewitness accounts had confirmed that feral dogs were behind the attacks.

Verma outlined the efforts being made by the administration to tackle the situation. These included: an appeal to villagers to form surveillance teams in the affected villages, sterilisation of dogs, animal birth control clinics, a two-member team of animal experts to identify the causes of the attacks and a team of scientists from the Indian Veterinary Research Institute (IVRI) which analysed the change in behaviour in Sitapur’s dogs. Even before the animal lovers had moved their plea in the Supreme Court, the DM invited them to see how animal rights were being protected in the district.

World Wildlife Fund (WWF) experts who were in Sitapur are yet to submit their findings. Initial reports suggested that the experts did not find any sign to indicate the presence of animals such as jackals, hyenas or wolves in the affected villages. They also did not find any dens of these predators in the six spots the team visited. The WWF team studied photographs of the dead children and concluded that dogs were behind the attacks. “Had any carnivore like a wolf or hyena attacked the children, then a larger portion of the body would have been eaten up,” the team members were reported to have said.

The district forest officer, Anirudh Pandey, said that the WWF report was awaited. “It should be released soon,” he said. He questioned the claim of dog lovers that feral dogs were not behind the killings. “A dog belongs to the canine family but undergoes behavioural change only after it is kept as a pet. What has brought about this ferocity in community dogs in Sitapur has to be studied,” he said.

On May 9, a four-member team of IVRI scientists reached Sitapur and was reported to have said that the community dogs turned ferocious due to lack of food following the closure of slaughter houses. While advising the district administration on providing adequate food, the team also reportedly suggested giving calming drugs to the dogs to lower their aggressiveness.

The team also collected samples of soiled blood, hair and saliva from dead dogs. A district official said that the sample of only one bitch was found to be rabid. The genomic analysis of samples, reports said, matched those of domesticated dog species, thus confirming that dogs were behind the attacks.

A district official, who spoke to this writer on condition of anonymity, did not rule out the role of other wild animals in the attacks. “A hyena was spotted in Leharpur two days ago,” he said. Leharpur is about 26 km from Khairabad town in Sitapur. If this statement is proved correct by the WWF report, the Sitapur district administration could be held guilty of culling innocent pariah dogs and is liable for punishment under Sections 428 and 429 of the IPC for cruelty to animals.

Panic buttons were pressed when stray dogs were alleged to have killed two children in Khairabad on April 30. A third child was also attacked and mauled. All the children were below 12 years and had gone to attend nature’s call. The same day, a nine-year-old girl’s body was found in a nearby village. It was believed that she too was a victim of stray dogs. Two more children were killed on May 10.

With the official claim of nine dog attack deaths in Khairabad this year, with locals claiming 14, the town is the worst affected. Officially, 12 children have been killed in the district since November last year. It was the sudden spurt of attacks by feral dogs in April-May which made Khairabad, famous for its eye hospital, a scary place.

Initially, the attacks went unnoticed. But in March this year, a six-year-old child, Mobin, was allegedly killed by dogs in Gurpalia village. The child’s parents did not inform the police. No post-mortem examination was conducted.

Before this perceived behavioural change, Sitapur reportedly had 300-400 cases of dog bites daily. Uttar Pradesh accounts for approximately 27 lakh cases every year with around 30,000 victims being administered anti-rabies vaccine in Lucknow in 2017-18.

These numbers are too high compared to Kerala where one lakh cases of dog bite were reported in 2015-16. A Su­preme Court appointed three-member committee described the frequent at­t­acks as a “dangerous situation” and the apex court refused to stay culling of stray dogs by the Thiruvananthapuram Municipal Corporation in 2016. Kerala’s stray dog menace was again heard by the Supreme Court on May 6, 2018, when it was reported that dog bite victims were not paid compensation as di­rected by the three-member committee.

However, no such compensation is given in Uttar Pradesh. After the Allahabad High Court asked the government about steps being taken to check the menace of feral dogs, Chief Minister Yogi Adityanath visited Sitapur and gave a compensation of Rs 2 lakh to the families whose children had been killed by strays. The injured were given Rs 25,000 each. After May 21, culling, surveillance and caution on the part of parents have resulted in no attacks being reported. It will be a long time before man regains the friendship of his best friend.