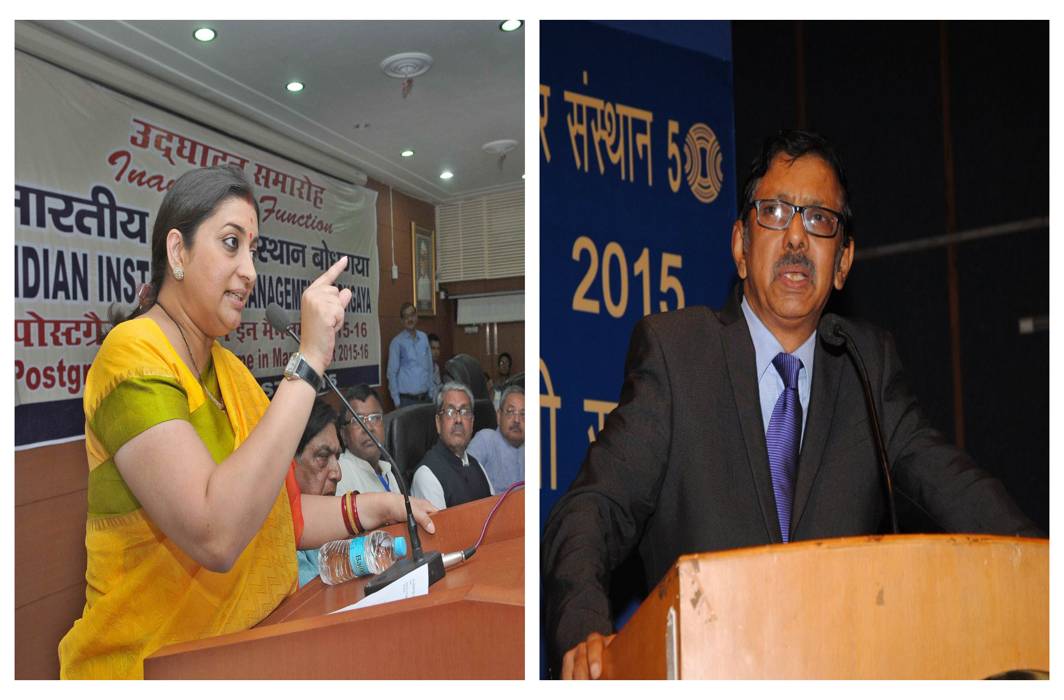 The stand-off between the minister and the public broadcaster threatens the livelihood of 28,000 employees of DD and AIR. Will Parliament step in to douse the flames?

Anger and arrogance in Indian governance can take bizarre forms. It can upturn laid-out norms, throw ethics out of the window and destroy even autonomous institutions that used constitutional powers to survive and flourish in the country’s democratic set-up.

Nothing can exemplify this better than the current stand-off between Information and Broadcasting (I&B) Minister Smriti Irani and Prasar Bharati. Known for her autocratic ways, she has, in an unprecedented step, attempted to block the salaries of thousands of employees of Doordarshan (DD) and All India Radio. The I&B ministry is supposed to release around Rs 200 crore every month to Prasar Bharati to meet its routine expenses.

Prasar Bharati managed to pay the January and February salaries using contingency funds. It may be able to pull along for another month with its remaining funds. But if Irani has her way, there will be no money to pay Prasar Bharati employees in April.

Incidentally, Prasar Bharati CEO SS Vempati had tweeted: “Noticed reports in sections of media on non-disbursal of salaries to DD & AIR staff. Rs 208 cr towards salaries were released on the 28th Feb 2018. Attempts to create panic malafide. PB (Prasar Bharati) has so far received Rs 1989 crores from MIB (Ministry of Information and Broad-casting) as grants-in-aid for salaries during FY2017-18.” He did not mention that this money was released from Prasar Bharati’s reserves.

However, hours later, he again tweeted: “Rs. 208 crores were released by @prasarbharati towards salaries for on 28th February 2018 from IEBR reserves.” This makes the CEO’s stand in the whole issue suspect.

Irani’s move is seen by the top brass in Prasar Bharati as an attempt to punish them and strangulate the working of the public broadcaster just because it did not cave in to her demands to okay payment to a private operator. The operator had been asked by the ministry to document the International Film Festival of India (IIFI) 2017 in Goa and had submitted a whopping bill of  Rs 2.92 crore.

Prasar Bharati is within its rights not to pay the bill when all this while the same job was being done by DD. And that is one question that Irani will find difficult to answer—why did she hire an external agency when DD had all the technology and talent to execute it?

Though the public broadcaster is ridiculed for its comparative subtler content than private broadcasters who are loud and often ridiculous, it is a fact that it has numerous experienced technicians, camerapersons and producers who can do complex shows using multi-cameras. They are well-versed in telecasting important events such as the Republic Day Parade, state-sponsored events and festivals. After all, the shoot at the film festival in Goa required just 15 cameras operating at the same time. DD is known to operate double that number.

As it is, the public broadcaster is strapped for funds and has to compete with many news and entertainment channels which are owned by media houses with deep pockets. So, what was the logic of hiring an expensive private player when DD could have done it at a fraction of the cost?

A retired official who held a senior post in DD attested that it had very experienced people who could handle any show or shoot with ease. Even those hired on contract are well-qualified and talented.

Irani’s move has spurred uncomfortable questions about why she hired a private player to do a simple job.

The minister had adroitly shifted the management of the Goa festival, IFFI, to the National Film Development Corporation (NFDC). Earlier, it used to be under the I&B ministry. NFDC then accorded the telecast rights for the Goa festival to SOL Production Private Limited, a private production house that produces entertainment shows.

There were other irritants in the testy ties between Irani and Prasar Bharati. The broadcaster had raised objections to the hiring of two journalists at salaries which were seen as very high and which would not go down well with other employees in similar senior positions. Irani was reportedly interested in getting these two journalists on board. One of them was an editor of a daily newspaper whose reputation had come under a cloud for pushing fake news about a communal conflagration in Uttar Pradesh. The other was a journalist with a business television channel. They were reportedly being offered annual salaries that ranged between Rs 75 lakh and Rs 1 crore.

Jawhar Sircar, former CEO of Prasar Bharati, told India Legal: “There is sheer anarchy going on. The ministry may not like the chairman of Prasar Bharati but that does not mean it can hold back salaries of around 28,000 employees on silly grounds. Ego clashes cannot be the reason to stop the functioning of such a large and important organisation. There are scores of employees in remote places like Kargil and Kutch manning transmitters. They cannot be denied salaries. A move like this is just not legally tenable.”

Sources told India Legal that Prasar Bharati chairman Surya Prakash had been appointed as he was close to the RSS and BJP leadership. So it came as a surprise when he openly locked horns with Irani after her unprecedented move undermined the authority of Prasar Bharati. His stand would have the blessings of the RSS leadership, they felt, as the top brass there was not seeing eye to eye with Irani.

Prakash, with his journalistic background, has friends across all parties. A source close to him said that he walked around with a resignation letter in his pocket. He was also disturbed that numerous officers of the Indian Information Service were arbitrarily transferred by the ministry. A source said that a senior cabinet minister was very upset when an officer from her office was transferred in a similar manner and attempts were made to foist another officer whom she was not keen on.

One of those who was arbitrarily transferred was Anindya Sengupta, the president of the Indian Information Services Officers Association. This reportedly happened when he complained to the PMO about how she was on a spree, transferring officers.

If the confrontation continues between Prasar Bharati and Irani, it could spell trouble for PM Modi, who would rather not have such a controversy when the parliamentary elections are a year away. Irani was reportedly not happy with the reappointment of Surya Prakash as chairman for another term as she probably wanted someone whom she could control.

In mid-February, Prasar Bharati rejected a proposal of the ministry to appoint an IAS officer to its board who would be in charge of human resources and administrative decisions, saying it went against the Prasar Bharati Act passed by Parliament.

Incidentally, every government wants to control the public broadcaster and use it as a propaganda tool and not grow as an independent entity. Few know that the Prasar Bharati Act requires the constitution of a 22-member parliamentary committee under Section 13. Its job is to supervise the working of Prasar Bharati on behalf of Parliament. Its members would be from both Houses through proportional representation. However, what is interesting is that no government has shown any interest in setting it up as it would then give Parliament an upper hand and diminish the controlling role that the I&B ministry can otherwise have.

As the tiff continues, the ministry sent out a statement through the Press Information Bureau that Prasar Bharati must sign a memorandum of understanding with it as general financial rules of the government specify that it has to be accountable for the way it uses government grants. Prasar Bharati receives grants from the ministry, but is an autonomous body created by an Act of Parliament.

Irani is one of the youngest ministers in the NDA government and the general talk in the party is that she is being groomed to fight Rahul Gandhi in Amethi in the coming Lok Sabha elections. Her meteoric rise in the party and the cabinet has made her feel that she is indispensable and that is why she has resorted to such high-handed action, said a former DD employee.

Rajya Sabha TV, which was very unlike a government channel as it had programmes that critically took on the current government, also changed when she took over, said a former television personality who quit in disgust.

A source who knows Prakash well said that he is not one to be cowed down as he is very clear that the law of the land gives Prasar Bharati complete autonomy. That is why he said that now it was for Parliament to get the salary issue resolved. Clearly, Irani wants an iron curtain around. Soon after she took over, she instructed senior officials of the ministry not to talk to the media unless they had specific permission and only a designated spokesman could do so.

Modi will not want the current controversy to be exploited by the Opposition in this Parliament session. Irani also knows that it will go against her and would not like to lose the coveted cabinet position she has. But how she will wriggle out of this impasse remains to be seen. Will this controversy be given a decent burial?