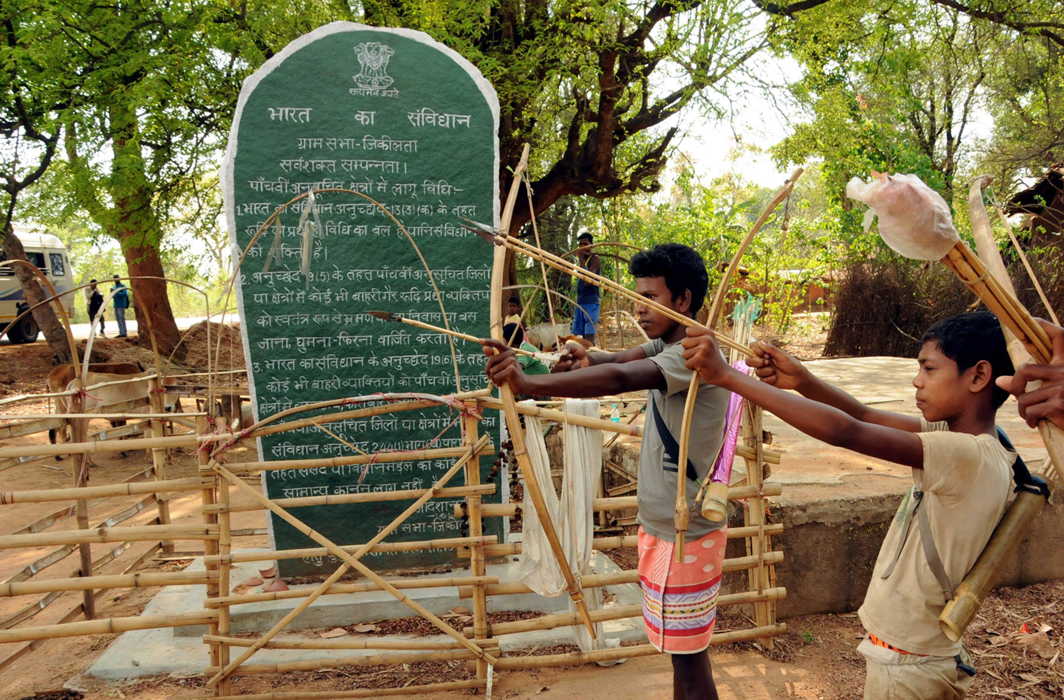 Above: Siladon villagers stand with bows and arrows near a large stone slab that enumerates their rights under Schedule 5/Photo: UNI

People’s movements in tribal hinterlands can get so mired in the vicious politics of extortion, rape, violence, counter-violence and intrigue that ultimately they want to escape the horror. It’s both by design and accident. No story from Bastar, Jharkhand, Jashpur and surrounding areas can explain the situation factually. As in all wars, truth is the biggest casualty.

Kochang village in Khunti district in Jharkhand, which has been witness to the Pathalgadi movement since 2016, has become a stage for course-correction of the tribal movement for implementation of Schedule 5 of the Constitution in toto. Five women who had gone to a Church-run school to perform a street play against human trafficking, were kidnapped and gangraped on June 19. Three arrests were made, of which two were Pathalgadi supporters. The third person—Alfonso Aind, a Catholic priest and head of the management of that school—has alleged that the state government is bent upon destroying the Church through false allegations.

And this is where the intrigue begins. While the gangrape case was the tipping point, anger in the region’s  Schedule 5 areas against the State had been building up for a while. It started in 2016 with the government proposing changes in the Tenancy Acts (Chotanagpur Tenancy Act and Santhal Pargana Tenancy Act) to remove the existing restrictions on sale and transfer of tribal land to non-tribals. Though the provisions were withdrawn in 2017 after the governor returned the Bill, the Opposition had garnered widespread protests against the government. In tribal areas, it took the form of Pathalgadi, wherein villagers erected large stone slabs outside their villages printing their rights under Schedule 5 and restricting the movement of government officials and outsiders in protest against lack of development. And recently, the government’s amendment to the Land Acqui­sition Act of 2013, which waived the social impact assessment before land is acquired for certain public sector projects, was met with suspicion.

If one were to paste the map of the Pathalgadi movement in Jharkhand and the contiguous Jashpur region of Chhattisgarh, it would cover most of the Maoist insurgency-affected areas. The people believe their local tribal leaders who are talking about gram sabhas’ rights under Schedule 5. They want some semblance of development to touch their lives. Their leaders are commoners such as postmasters and sarpanchs. The Church is believed to be backing the movement. The People’s Liberation Front of India and other Maoists are also involved in this. Opposition leaders in the state are naturally interested in this issue.

The state wants no such movement because it hurts the BJP’s interests. The irony is that the Jharkhand government is largely tribal even though for the first time, there is no tribal CM there. The civil administration in Khunti and surrounding districts is largely tribal with a smattering of Murmurs, Dungdungs, Soys and Mundas. They are sympathetic but duty-bound. The police acts only when required and then it spins a web of intrigue to obfuscate the matter like in the rape of the five women.

While it is a fact that the women were abducted from a Church-run school and raped, the police say Father Alfonso was in the know. It seems he had prevented the abduction of two nuns, but allowed other women to be abducted by tribals who took them to a nearby jungle to “teach them a lesson not to spread awareness against child trafficking through street plays”. Sounds implausible. There’s more. One of the arrested is the uncle of one of the victims; he has denied that he was among­st the rapists. The state has succeeded in breaching tribal unity through such tactics.

The other ploy now is to complete as many development schemes as possible. So work has begun on long-pending electricity lines, houses are being made under the Pradhan Mantri Garib Kalyan Yojana and loans are being doled out for crops, etc. However, nothing much has been done for filling teaching posts in schools in tribal areas. Block development officers say that tribals allow work that they think is essential for them and disallow projects which they think should be discussed in the gram sabha.

Sukhram Soy is the postmaster as well as gram pradhan of Kochang. He has been named as an accused in half-a-dozen Pathalgadi cases but has not been arrested. He reportedly told scribes that he believes in the Pathalgadi cause but not in the restriction of movement. He was believed to be the head of the movement in February but there seems to be pressure on his job so he may have toned down his stand.

Another angle associated with most insurgencies is also to be found here—poppy cultivation. Officials claim that they recently destroyed over 2,600 acres under poppy cultivation which was being used to finance the insurgency. Khunti and Chatra districts are the largest producers of poppy and subsequently, opium. Villages under Khunti, Arki and Murhu blocks were used for poppy cultivation, which would be processed into opium. Tribal villagers now feel they are caught between two forces: the jungle party and the police and both use strong-arm tactics.

The see-saw battle will continue till there is dissatisfaction in the villages. Schedule 5 may be the pivot today as was corruption of forest and revenue officials sometime back, but in the end, it’s all about jobs and development.