A representative democracy survives and evolves on the back of an informed citizenry: CJI Ramana

Live streaming of proceedings is crucial for dissemination of information, which is a sacrosanct aspect of Article 19: CJI N.V. Ramana 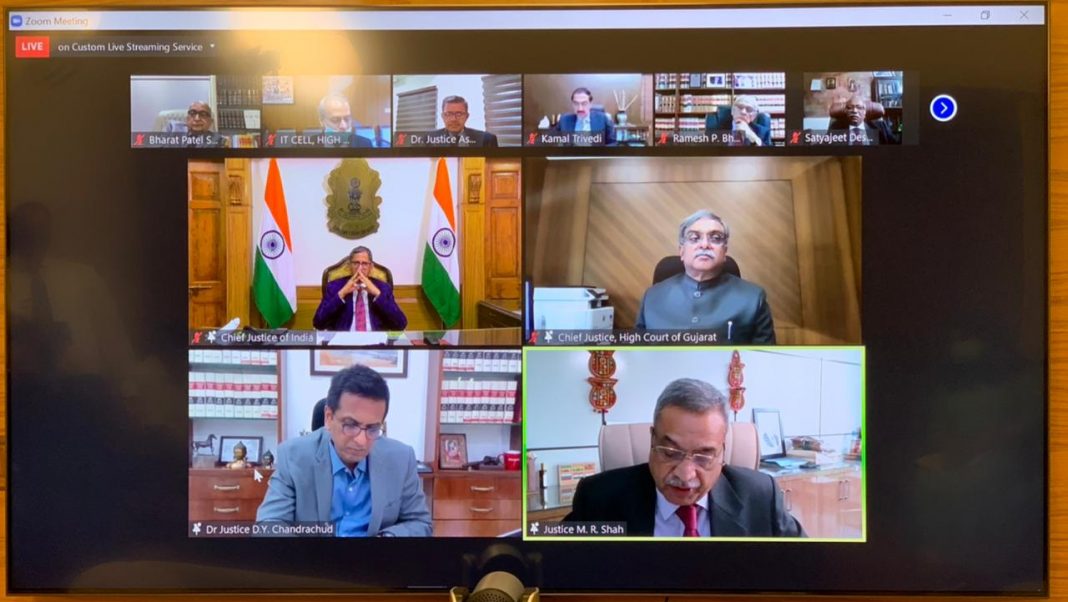 People of India are bestowed with the right to know under the Constitution, which includes knowledge of the institutions that serve them. One way to further this right is to allow the people access to watch the functioning of these institutions, as only on the backs of an informed citizenry, a representative democracy survives and evolves.

These views were expressed by Chief Justice of India N. V. Ramana on Saturday while inaugurating the live-streaming of the proceedings of Gujarat High Court.

The Chief Justice said, “The Constitutional Courts of our country, the largest democratic republic in the world, are the guardians of the Constitutional mandate. For public confidence and faith to reach new heights, it is imperative for us to widen the gates of justice.

“Traditionally, the Courts have always been open. Since their inception, from the filing of a plaint to the delivery of the judgement, every proceeding of the Court is based on the idea of transparency. Hearing of cases have always taken place in public courtrooms, with access being allowed not only to the lawyers and the litigants in a particular case, but also to the public. The only restrictions that were ever imposed were because of space and security considerations. Recently, the pandemic has forced us to impose new restrictions,” he added.

According to the CJI, poverty, social inequity, lack of awareness, cost, distance and time made it difficult for some of the population to actively attend the Court proceedings, a shortcoming that could be overcome by live streaming of proceedings.

Justice Ramana expressed regret over the fact that even after 74 years of independence, multiple incorrect notions still prevail in the minds of public regarding the justice delivery system. These prevailing notions and misapprehensions ultimately hinder access to justice, as they may dis-incline people to seek redressal of their rights.

It is high time for de-mystifying the justice delivery system in the country and furthering access through open courts. Access to justice will become a true reality, when litigants and interested parties get to witness, understand and comprehend justice dispensation first hand, observed the CJI.

People follow the arguments of lawyers and observations of the bench only in certain cases, such as those involving the Constitutional interpretation or attracting public attention, he said.

Stating that public obtains information about Court proceedings through the media, which is filtered by the agents of transmission, the CJI said that in the process, sometimes this transmission loss leads to misinterpretation of questions asked and observations made by the bench, due to the absence of the context.

Also Read: A Judge must stand up against popular perception for justice: CJI Ramana

It is this lack of direct access, which gives space to misconceptions. The formalisation of live streaming of court proceedings is the best cure for the malady. Live streaming of proceedings is crucial for dissemination of information, which is a sacrosanct aspect of Article 19. Through such direct access, people can get first-hand information about the entire proceedings and the opinions of the judges, leaving little room for any mischief, added Justice Ramana.