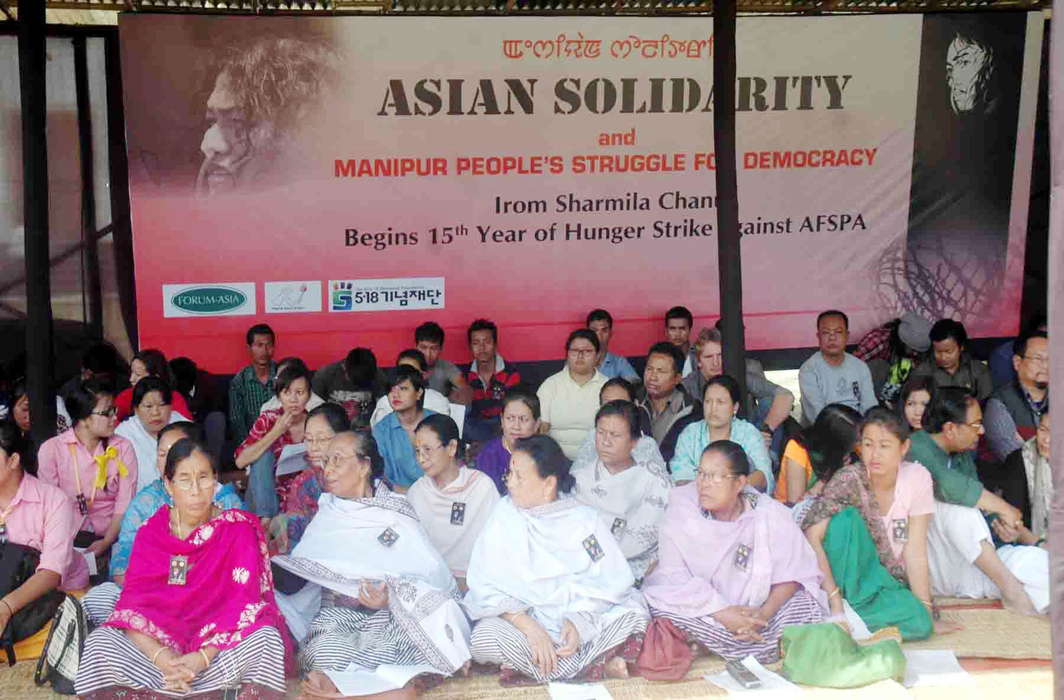 Above: Activists stage a dharna against AFSPA in Imphal. There have allegedly been 1,528 extra-judicial killings by security forces in Manipur between 2000 and 2012/Photo: UNI

A petition by 356 soldiers asking for all court-monitored probes into fake encounters by the Armed Forces to be stayed will turn the Constitution on its head, jeopardising democracy

In an unprecedented move, 356 Army officers recently filed a writ petition in the Supreme Court asking for all court-monitored investigations into fake encounters by the Armed Forces to be stayed. The first prayer of the petitioners is to protect the “bona fide” action of soldiers under the Armed Forces Special Powers Act (AFSPA), “so that no soldier is harassed by initiation of criminal proceedings”.

In order to understand this plea, one has to first understand AFSPA and how it is used. AFSPA gives the Indian Army the power to maintain public order in “disturbed areas”. It has the authority to prohibit a gathering of five or more persons in an area and can use force or even open fire after giving due warning if it feels a person or group is in contravention of the law. If reasonable suspicion exists, the Army can also arrest a person, search premises without a warrant and ban the possession of firearms.

A “disturbed area” is one which is declared by notification under Section 3 of AFSPA. An area can be disturbed due to differences or disputes between members of different religious, racial, lang­uage or regional groups, castes or communities. The central government or a state/Union Territory can declare the whole or part of its territory distur­bed through a notification in the Official Gazette. It can be invoked in places where “the use of Armed Forces in aid of the civil power is necessary”.

AFSPA came into force in the context of increasing violence in the North-East decades ago, which the state governments found difficult to control. The Armed Forces (Special Powers) Bill was passed by both Houses of Parlia­ment and was approved by the president on September 11, 1958, making it into a law.

It is in effect in the whole of Naga­land, Assam, Manipur (excluding seven assembly constituencies of Imphal) and parts of Arunachal Pradesh. The centre revoked it in Meghalaya on April 1, 2018. Earlier, AFSPA was in effect in a 20-km area along the Assam-Meghalaya border. In Arunachal Pradesh, the impact of AFSPA was reduced to eight instead of 16 police stations in Tirap, Longding and Changlang districts bordering Assam. Tripura withdrew AFSPA in 2015. Jammu and Kashmir also has a similar Act.

As a law facilitating one-time/short engagement of the Army in internal security (IS) duties to quell insurgency, AFSPA cannot be faulted. But the problem is the prolonged and endless deployment of the Army in IS duties of all kinds, which is the job of the police and at most, paramilitary forces. As per Army Doctrine 2004, the Indian Army’s primary role is to preserve national interests and safeguard the sovereignty, territorial integrity and unity of India against any external threats by deterrence or by waging war. To perform this role, the Army keeps aloof from the civilian crowd, concentrating on training and battle-readiness.

Relegating the Army to its secondary/tertiary role by decades-long deployment in counter-insurgency and IS duties dilutes its authority, corrupts ranks and compromises efficiency through lack of training. Besides, over time, the Army is looked upon merely as another state force with its soldiers losing the respect and mystique they traditionally enjoyed. Familiarity breeds contempt and military men find themselves at the receiving end.

This is precisely what is happening in Kashmir and several places in the north-east. As the civilian population is directly involved, politics and politicians come in. Power games begin and wittingly or un­wittingly, the Army becomes a pawn in it. The endeavour of power-mongers has always been to create a situation of intense hostility, inextricably miring the military and forcing it to resort to excessive force.

While exercising draconian powers, there is bound to be misuse. In a July 2016 verdict, the Supreme Court ripped off the cloak of immunity and secrecy provided by AFSPA to security forces for deaths caused during encounters in disturbed areas. In July 2017, it directed a CBI probe into alleged extra-judicial killings by the Army, Assam Rifles and the police in insurgency-hit Manipur. It had asked the CBI director to appoint a Special Investigating Team (SIT) to probe the alleged killings. The order came after a PIL sought a probe into and compensation for the alleged 1,528 extra-judicial killings by security forces in Manipur between 2000 and 2012.

Earlier, commissions headed by former apex court judges had found serious human rights violations by security forces and had recommended scrapping of AFSPA or making drastic changes in the Act. But successive governments and Army top brass have been defending AFPSA with all their might. Over the years, the effort of ruling politicians has been to make the Army an instrument of an increasingly autocratic State. So, the big question arises: What is the mandate of the Army—defending democracy or oppressing the people at the whim of an autocratic State?

This issue was highlighted when Prime Minister Indira Gandhi imposed Emergency in June 1975, turning a vibrant democracy into an enslaved autocracy. Putting the entire blame on Jayaprakash Narayan and the movement led by him, she made specific reference to JP calling upon the Army not to obey any order it considered wrong. “You have not sold your conscience and honour for the sake of your bread,” JP had exhorted the Army, and challenged the Home minister to try him for treason.

India’s professional Army had remained resolutely non-political since Independence. During the Emergency it kept its faith and stood in defence of the constitutional principle of democratic governance. Fortuitously, the Emergency ended within a short period and democracy was restored with Indira Gandhi’s defeat in the 1977 elections.

Coming to the petition of the 356 Army officers, this “show of strength” was triggered by two cases which brought the Army to the brink of prosecution. First is the Manipur case and the second is the deaths of three civilians in Shopian, Jammu and Kashmir, in Jan­uary 2018. The state government had filed an FIR against Major Aditya Kumar of 10 Garhwal Rifles in this case. His father, Lt Col Karamveer Singh, approached the court, seeking to quash the FIR. In March 2018, the chief justice of India stayed investigation into this case.

The Manipur case has been referred to repeatedly in the petition, with the petitioners asserting that the historic orders passed by the Supreme Court in 2016 and 2017 to investigate cases of alleged fake encounters are against the Indian Constitution. The petition is also an ex parte application for stay, which means the victims who are seeking justice for alleged fake encounters may not be heard in court.

The Army officers feel that the FIRs which are being filed against them by the CBI and state governments are “motivated and indiscriminate”. They call the victims “anti-nationals”. In the petition, they ask the Court to initiate an investigation of the victims and petitioners themselves. They even ask for Armed Forces personnel who are the accused in this case to be given “adequate compensation” by the Court.

Their petition says that Army officers need to be safeguarded from “persecution and prosecution”. They asked the Court to ensure that no legal proceeding should be instituted against them without the sanction of the central government. Army officers claim that the CBI cannot investigate them. They go a step further and say that even FIRs cannot be filed against them.

The filing of this plea by serving Ar­my officers assumes significance as the CBI’s SIT has recently filed charge-sheets in two separate encounter cases in Mani­pur in which murder charges were slap­ped. The Supreme Court is scheduled to hear this petition on September 4, 2018.

In sum and substance, what the Army officers are seeking is total immunity from any legal action and freedom to shoot and kill at will civilians in “disturb­ed areas” by just branding them insurgents, terrorists or anti-national elements!

As we have seen, the Army has a primary role—defending India by war or deterrence, and a secondary/tertiary role in counter-insurgency and aid to civil power. In its primary role, where enemies are involved, Armed Forces personnel certainly enjoy immunity without question. They don’t even need AFSPA for this. But giving them such immunity in their secondary/tertiary role where citizens are involved will be turning the Cons­ti­tution on its head, abandoning democracy and rejecting the rule of law.

Hence, giving AFSPA a free run as demanded by this bunch of Army officers would be suicidal for the democratic republic of India. This cannot be countenanced!

—The writer is a former Army and IAS officer. He fought in the 1965 war and also participated in counter-insurgency (Nagaland) and aided civil power (Tamil Nadu) operations