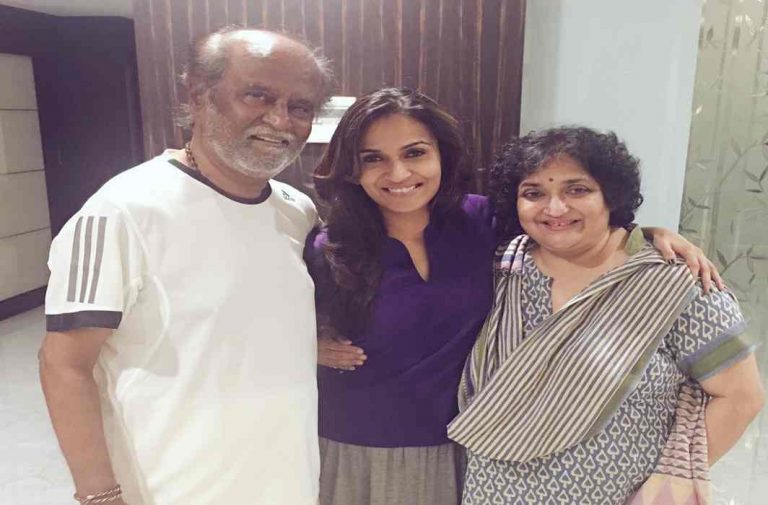 Above: Filmstar Rajinikanth with daughter Soundarya and wife Latha/Photo: Twitter

As the Tamil superstar Rajinikanth readies to take the plunge into politics, opponents are likely to harp on his wife’s financial shenanigans to torpedo his plans

In a development that could have a bearing on the political ambitions of Tamil film superstar Rajinikanth, a three-judge bench of the Supreme Court headed by Justice Ranjan Gogoi and comprising Justices R Banumathi and Navin Sinha directed his wife, Latha Rajinikanth, to face trial in a case related to non-payment of  Rs 6.2 crore to a film distribution company.

The Bench could barely hide its anger as it told Latha’s counsel: “We had kept the matter pending since February 20, because you had said that day that you will pay the amount.” The latest directive came on a day when the apex court also set aside a Karnataka High Court order of 2016 which quashed criminal proceedings against Latha and revived the case. While quashing the High Court’s order the SC said that the HC should not have cancelled the complaint at the initial stage and ordered the star wife to face the trial pending in a magistrate court in Bengaluru and further said: “It is a fit case for the commencement of trial.”

The case has its genesis in an MoU signed on April 25, 2014, between Mediaone Global Entertainment Limited (owned by Rajinikanth’s family members) and Ad-Bureau Advertising Private Limited for the distribution of the Rajinikanth starrer Kochadaiyaan, directed by Rajinikanth’s daughter, Soundarya.

Latha is one of the directors of Mediaone Global Entertainment, that had taken a Rs 14.90-crore loan from Bengaluru-based Ad-Bureau Advertising to finish the post-production work of the film, hailed as India’s first motion capture animated film, in which Rajinikanth’s co-star was Deepika Padukone. A sum of Rs 6.20 crore is outstanding. On February 20, the Supreme Court has said if Mediaone Global Entertainment did not pay the dues to Ad-Bureau Advertising within three months, Latha would have to pay the amount as per her undertaking. The court was hearing an appeal filed by Ad-Bureau against an order passed by the Karnataka High Court on March 10, 2016, quashing criminal proceedings pending before a magistrate court in Bengaluru.

“As per the MoU, we have invested Rs 10 crore on April 28, 2014. But Latha demanded an additional amount of Rs 20 crore for the production of the film. However, we did not give that money and launched our own investigations and found out that she was diverting funds to some other personal works and settling personal liabilities. We confirmed this through our own inquiries and through inquiries conducted by various public sector banks,” says the petition filed in the Supreme Court by Ad-Bureau Advertising. In the meanwhile, a division bench of the Karnataka High Court on March 10, 2016 quashed all proceedings against Latha. The bench in its order ruled that “the case was not fraud but a breach of agreement”.

Then Ad-Bureau Advertising filed a petition in the Supreme Court and, during the hearing on February 20 this year, Latha’s counsel gave an undertaking to the Court that they would pay Rs 6.2 crore to Ad-Bureau Advertising. However, Latha did not pay and when the case came up for hearing on July 10 simply said through another counsel that her previous counsel’s undertaking of paying Rs 6.2 crore was given without her instruction.

At this stage the apex court said: “We have already said on February 20 itself that if Mediaone did not pay the dues to Ad-Bureau Advertising Private Limited within three months, then you (Latha Rajinikanth) would have to pay the amount as per undertaking given by you.” The Bench further said: “We do not like people playing around with Court’s order. The long and short of it is that you (Latha) have not paid and the law will take its own course. We will pass the order.” The Supreme Court has shown a strong attitude from the beginning and said in February that “the Special Leave Petition is kept pending for three months. Within the aforesaid period of three months if the company—Media-one Global Entertainment Ltd—does not pay the balance dues, the respondent-accused (Latha Rajinikanth) has undertaken before the Court to pay the amount due.”

For over a year now, the star wife has been in the media glare for the wrong reasons. In December 2017, the Madras High Court ordered the Chennai Corporation to vacate Latha’s shop at a posh locality in Chennai if she refused to comply with the new rental rates. Latha was also involved in the travel agency business and was running her office in a building owned by Chennai Corporation. She was running the business for the past 25 years and paid a monthly rent of Rs 3,702. In 2017, the Corporation hiked the rent to Rs 21,160 per month. She filed a case against the Corporation in the Madras High Court, and the Court dismissed Latha’s plea while accepting the Corporation’s plea that the rent was hiked considering the market price and renewal of the lease period.

The Court also directed the police to give adequate protection to the Chennai Corporation officials in this regard. The ruling came after Latha approached the Court to quash the hiked rent. The Court said that the Corporation could auction the premises if she did not agree to the new rent.

In a third case in August 2017, the Ashram Matriculation School in Guindy (near Chennai airport), run by Latha, was sealed for a few months after the owner of the building complained that Latha, who owned the school, had not paid rent amounting to Rs 2 crore.

Now, the million-dollar question is what impact Latha’s activities will have on Rajinikanth’s political venture. Rajinikanth had already announced that he will enter politics and start a political party four to five months before the 2019 Lok Sabha elections. A section of observers says these developments will have a negative impact on Rajini’s political ambitions. His political opponents will in all likelihood play up these issues, because for them this is both a sword and a gauntlet to hit back at Rajini and also to protect them from his onslaught. “Whatever brave face several political parties show after Rajinikanth’s official announcement of entering politics, there is anxiety prevailing among major political parties,” says Dr Sumanth C Raman, political analyst.

As a star, Rajinikanth is adored by the people of Tamil Nadu. Politics of course is a different ball game altogether, and dirtier too. At least some are likely to turn around and tell the star “put your house in order first”.