The Supreme Court tackles a contentious issue—what action to take against those in authority making irresponsible statements. With hate speech on the rise, the matter acquires urgency and importance

In the politically-charged atmosphere that currently exists, statements by people in authority or public figures that can be termed “irresponsible” have increased in frequency. In fact, “irresponsible statements” often translates into “hate speech”.


The Supreme Court has stepped in with a bench led by Chief Justice Dipak Misra referring the matter to a Constitution Bench. The effort is to frame laws on action to be taken against individuals holding public office or persons in authority and/or in charge of governance, who make such statements. The apex court was reacting to a petition demanding action against SP leader and former minister Azam Khan for his statement in the Bulandshahr gangrape case. The minor victim of the Bulandshahr episode and her mother had moved the Court seeking action against Khan. He had tendered an unconditional apology on December 15. The Court appointed senior advocates Fali Nariman and Harish Salve as amicus curiae to assist it in the matter.

Nariman told the Supreme Court that a law like America’s Civil Rights Act needed to be framed to enable citizens to protect their fundamental rights against violation by other private individuals. The bench of CJI Dipak Misra and Justices AM Khanwilkar and DY Chandrachud referred the matter to a Constitution Bench after Salve and Nariman agreed to act as amicus curiae, saying the matter is of grave importance.

The expert committee, appointed by the Home Ministry, submitted a detailed report on how to tackle both online and offline hate speech.

The question is whether India needs a new law or merely better enforcement of existing laws. Speaking to India Legal, former judge of Bombay High Court Hosbet Suresh says: “So much of time and effort will be put into shaping a new law to control irresponsible speaking. We can just relook at existing laws and enforce them better.’’ However, social scientist Shiv Visvanathan takes a different view. “I support a separate law because hate speech is a specific act that targets certain people and communities.’’

He supports a law with more teeth. Till now, the authorities have been restricted to the use of Section 66A under the IT Act, which refers to content put online or on social media via a computer or a mobile device. This includes text, images, video or audio. It proved a draconian measure, and led to the arrests of a variety of people, including a cartoonist, a university professor, students and even industrialists. In most cases, they were posting content against politicians. Finally, a batch of petitions was filed in court for getting the provision quashed, which led to the Supreme Court striking down Section 66A. This ruling came in the matter of Shreya Singhal vs Union of India. Singhal, a lawyer, had reacted when two college-going girls were arrested for expressing displeasure online against a bandh called by the Shiv Sena in Mumbai after Bal Thackeray’s death in 2012.

The Home Ministry then constituted an expert committee to examine the issue and give recommendations. The committee submitted a detailed report on how to tackle both online and offline hate speech. The report, which has been seen by India Legal, recommends punishment and monetary fines in different categories of hate speech. The committee was headed by former Lok Sabha secretary general TK Viswanathan. Committee member Dr S Sivakumar, who is also a member of the Law Commission, told India Legal: “Taking a cue from the recommendations of the Law Commission on hate speech, the expert committee tried to cover everything required.”

In March 2016, the Law Commission submitted a report with recommendations to the Ministry of Law without touching online haters. “The Law Commission’s report is a detailed document. It has pointed out the need for a law. The aim is to make everyone feel safe,” says Sivakumar.

Two college-going girls were arrested for expressing displeasure online at a bandh called by the Shiv Sena in Mumbai after Bal Thackeray’s death in 2012.

“Anyone who is guilty of creating divide in the country, spreading messages that incite violence or hurt sentiments of anyone should face the law, and if a law with better teeth could tackle it better, why not?” asks Congress leader Tom Vadakkan.

The Law Commission’s report, which the Home Ministry’s expert committee has endorsed, suggested adding new provisions to make speech inciting hatred or causing fear, alarm or provocation of violence, a criminal offence under the Indian Penal Code (IPC), 1860. The report also sought to provide “watertight compartments to deal with various acts related to hate speech”, which is currently lacking in existing laws. The provision regarding incitement to hatred says that “gravely threatening words, either spoken or written, signs, visible representations” which cause fear or alarm on grounds of “religion, race, caste or community, sex, gender identity, sexual orientation, place of birth, residence, language, disability or tribe” will be punishable by two years in prison and Rs 5,000 fine. A second provision on “causing fear, alarm, or provocation of violence” will also be punishable by a one-year jail term and a fine of Rs 5,000. 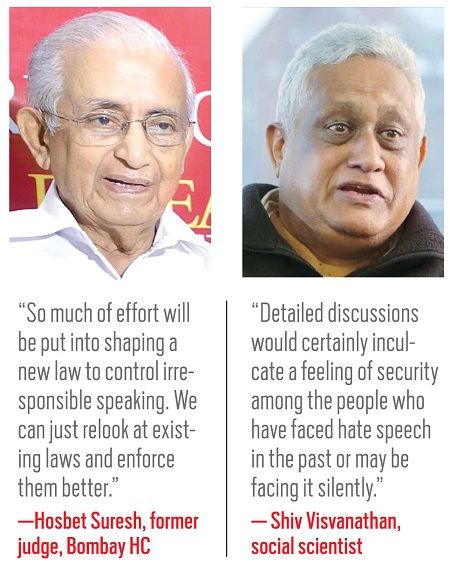 The Supreme Court, meanwhile, has asked Nariman to assist the Court on four larger questions:

These are questions that the Constitutional Bench will now have to tackle. As Visvanathan says: “Detailed discussions and the questions raised would certainly inculcate a feeling of security among the people who have faced hate speech in the past or may be facing it silently. This is important. This whole exercise of thinning of the issue will have a deeper social benefit.’’

That could well be, but so far, the provisions of existing laws on hate speech have been largely misused to target those who say or depict anything negative against those in power. Whether any new laws will change that Big Brother attitude remains to be seen.