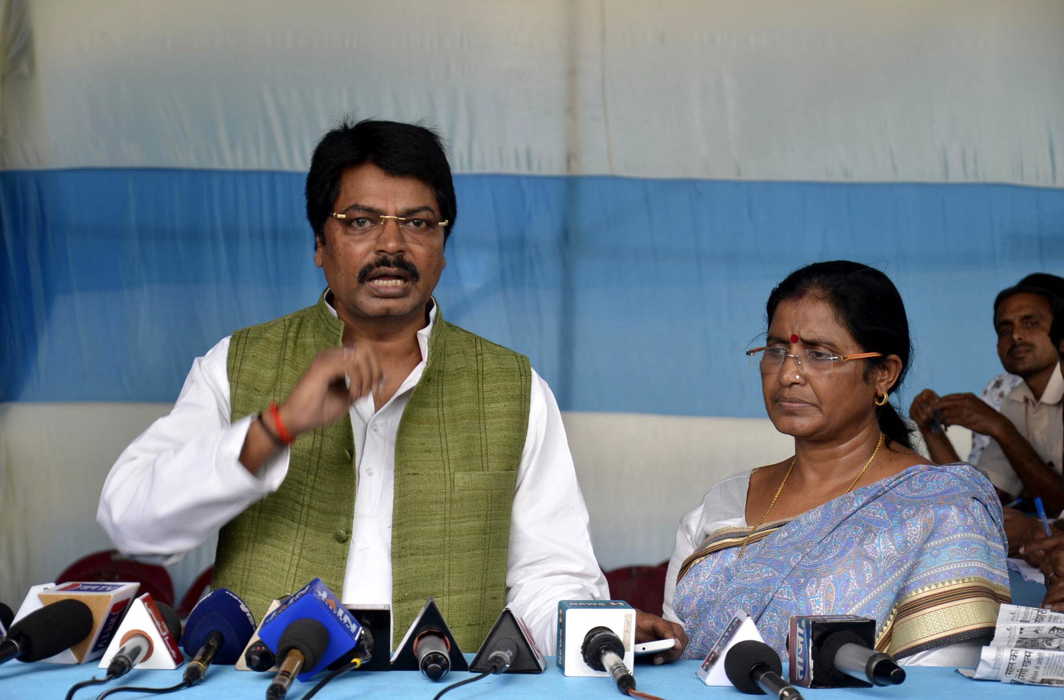 Above: Former Jharkhand minister Yogendra Sao and his MLA wife, Nirmala Devi, say the judge framed charges against them via WhatsApp/Photo: Anil Shakya

It might be par for the course in corporate board meetings for the members sitting in different cities to exchange messages on WhatsApp if the videoconferencing system is not working. But delivery of justice using the instant messaging app is an unacceptable “joke”. Two Supreme Court judges recently snubbed a Jharkhand court for conducting trial in a criminal case through WhatsApp. The “joke” is no laughing matter because the case involves a former minister of Jharkhand and his wife for their alleged role in police firing that killed four villagers in Hazaribagh district in 2016.

“This process cannot be allowed, and we cannot let administration of justice be brought into disrepute,” remarked a Supreme Court bench comprising Justices SA Bobde and L Nageswara Rao. Taking serious note of the lower court judge’s recourse to WhatsApp, the justices thundered at the state government counsel, “What is happening in Jharkhand? What kind of a trial is this? Is this a kind of joke?” The Supreme Court was told that the trial court had to pronounce the order on a WhatsApp call because videoconferencing connectivity between the Bhopal and Hazaribagh district courts was most of the times very poor.

The argument is not without basis though. The Bhopal district court’s video-conferencing facility is indeed dysfunctional. Because of its frequent technical snags, the court could not hold hearings of SIMI operatives, who are lodged in Bhopal Central Jail. In view of the security concerns, the Madhya Pradesh High Court had ordered trial of the alleged SIMI operatives through videoconferencing from the jail. But the problem in videoconferencing connectivity between the court and the jail was not fixed and trials of the accused in heinous crimes, ranging from murder and sedition to bank robbery, kept getting deferred in the past.

The Supreme Court had granted bail to former Jharkhand minister Yogendra Sao and his MLA wife Nirmala Devi, who are accused in a rioting case of 2016, on December 15 last year, with the condition that they shall stay in Bhopal and not enter Jharkhand except for attending court proceedings. The Court also said that the accused could be tried through videoconferencing from district courts in Bhopal to Hazaribagh, Jharkhand.

Both the accused told the top court that the trial judge, on April 19 this year, framed charges against them through a WhatsApp call despite their objections to it. The apex court issued a notice to the Jharkhand government on the plea by both the accused, who have sought the transfer of their cases from Hazaribagh to Delhi, and asked the state to respond to it within two weeks.

Arguing for the transfer of cases to Delhi, defence lawyer Vivek Tankha said 21 were pending against Sao and nine  against his wife. “They are both politicians and have led various protests against land acquisition done by the National Thermal Power Corporation (NTPC) in Jharkhand and most of these cases relate to those agitations,” he said. Tankha urged the Court that since both the accused were  lawmakers at the time of filing these cases, the trial in these matters should be transferred to the special court in Delhi which is exclusively dealing with cases involving politicians.

Jharkhand’s counsel told the top court that Sao had been violating the bail condition and had been out of Bhopal most of the time due to which proceedings in the case were delayed. To this, the bench observed, “That is a different thing. If you have a problem with violation of bail conditions by the accused, you can file a separate application seeking cancellation of bail.”

Both Nirmala and Sao are accused in the case relating to violent clashes between villagers and police in 2016 in which four persons were killed. The journey of the politician couple has taken place through a maze of politics, agitations, jail and courts. Sao was an elected MLA on a Congress ticket from Barkagaon seat in Hazaribagh district in 2010. He was inducted as a minister in the Hemant Soren-led UPA government of Jharkhand in August 2013 and given charge of the agriculture department. However, his ministerial privilege was short-lived. Soren forced Sao to resign in September 2014, following revelation of the minister’s link with an ultra-left organisation, “Jharkhand Tiger”. The head of the outfit, Raj Kumar Gupta, revealed that Jharkhand Tiger was Sao’s brainchild.

Two days after his resignation, Hazaribagh sub-divisional judicial magistrate Akhilesh issued arrest warrants against Sao. A team of the Jharkhand crime investigation department arrested him in New Delhi after obtaining warrants from a Hazaribagh court on September 14. The Congress expelled Sao and an internal party probe found evidence to establish his links with Jharkhand Tiger.

But Sao’s political clout and Robin Hood image among the predominantly tribal people of Barkagaon assembly constituency meant the Congress yielded to Sao’s request to field his wife Nirmala from the seat in the 2015 assembly election which she won.

The couple waged a struggle against the NTPC on behalf of the tribals who were to be displaced. They mobilised people against land acquisition by the public sector giant for a mining project.

Sao was arrested in October 2016 on charges of criminal conspiracy and instigating attacks on state officials. He was charged with leading a mob that got his wife Nirmala freed from custody and spurred a police firing that killed four. The police slapped as many as 21 sections of the Indian Penal Code against both Sao and Nirmala, with charges ranging from criminal trespass to rioting and voluntarily causing grievous hurt. Nirmala went underground. Later, she, too, was arrested along with son Ankit Raj.

Subsequently, the Hazaribagh police again issued arrest warrants against the couple and son Ankit. In May 2017, they all surrendered in a Hazaribagh court. Sao was sent to Dumka jail while his wife and son were sent to Hazaribagh Central Jail.

Now the couple is awaiting the Supreme Court verdict on their plea to try them in a fast-track court in Delhi which is set up exclusively for cases involving politicians.