Above:  The petitioner said hoisting of the green flag with a crescent and star amounted to sedition/Photo: UNI

The UP Shia Waqf Board chairman, Syed Waseem Rizvi, has left no stone unturned to endear himself to the ruling BJP by singing its tunes on various sensitive issues like the Ram temple and linking madrassas with terrorism.

Being at loggerheads with another Shia cleric, Kalbe Jawwad, Rizvi is known for his controversial statements. Some of them are that the Babri Masjid is a blot on Indian soil; the mosque at the disputed site is against Islamic principles; if a Ram temple is not built in Ayodhya, “I will self-immolate in front of the Ram temple gate”; madrassas should be closed down as they promote terrorism and Muslims should hand over nine disputed mosques to Hindus. He even called the All-India Muslim Personal Law Board a “terrorist organisation”. His remarks on homosexuality and Islam led to his expulsion from the community.

Now pained at the “growing strife between two major communities of India”, Rizvi filed a PIL in the Supreme Court in April last year after seeing “scores of green flags with crescent and star, resembling Pakistani political party Muslim League flags… hoisted on hundreds of buildings, shops… Muslim religious places, including mosques” in Mumbai and a few other states. Claiming that these green flags with the crescent and star were enemy flags and “un-Islamic”, the petition, which was taken up on July 20, sought a ban on their hoisting. The flag is the officially registered flag of the Pakistan Muslim League (PML), a political party of an enemy country, but

The PML’s political flag has become a religious flag in India, it said, and hoisting them causes communal tension. They should be banned to preserve harmony, the petition argued. It also sought action against those hoisting flags similar to that of the PML which belonged to an enemy country. The petition submitted that Pakistan was an enemy country and was responsible for a series of terror attacks on India and has been promoting and propagating cross-border terrorism. “Our country remains vulnerable to the hidden attacks by the Pakistani intelligence agencies through their militant network which is very active in our country,” the petition, which was filed under Article 32 of the Constitution, said. It also said that hoisting wrong flags, believing them to be religious flags, required the intervention of the government and its agencies.

Green flags with a crescent and star were also raised at Rahul Gandhi’s rally in Wayanad in April after he filed his nomination for the general election. BJP leaders and social media trolls attacked him for having Pakistan supporters raising that country’s flag, although these flags were distinctly different. A fact check showed that the flags belonged to the Indian Union Muslim League (IUML), which was formed in Chennai in 1948, but the BJP’s propaganda machinery distorted the fact.

The contentious flag in UP, according to the petition, came into existence with the formation of the Muslim League in 1906. Although the Jinnah-led party was dissolved in 1947, “it still flies prominently at various places in India”. After Partition, Pakistan adopted the same flag with a minor addition of a vertical white strip on the hoist side, but the PML retained the same flag. Prior to that, Turkey’s flag had a star and crescent on its flag but on a red background.

Rizvi said that the IUML flag was different from the PML’s. According to available images, the IUML flag has the crescent and a star in the top left corner near the hoist, while the PML flag has the two objects almost in the middle. The petition said that it was “relevant to state that the crescent and star in a green backdrop have never been part of any Islamic practice and it does not have any role or significance in Islam”. During the time of Prophet Muhammad “early Muslim armies and caravans flew simple solid coloured flags, generally black or white, for identification purposes,” said the petition.

The Prophet, it said, used flags of different colours in different campaigns. “One of the flags used by the Prophet, the Black Standard was known as al-Uqab (the eagle). It was pure black without symbols or markings,” but the Prophet entered Mecca holding a white flag, the petition said. Muslim clerics, however, associate the green flag with Islam.

Rizvi argued that “crescent and stars were worshipped like God before Islam came into being”, but the tenets of the Holy Quran “prohibit the worship and obeisance to sun and moon”. Verse 37 of Chapter 41 categorically states that Muslims must not worship the stars and the crescent, the petition said.

This verse, the petition argued, “clarifies all doubts on the subject as it categorically states that no one, who accepts the Islamic faith, is required to prostrate before or accept the crescent and moon as the symbols of Islam”.

Arguing that hoisting of the green flag with a crescent and star “by a handful of greedy and opportunist people” amounted to sedition, Rizvi said that the act “falls within the ambit of Section 124A, 153, 153A of IPC”. These sections relate to offences of sedition and those of promoting enmity between different groups.

Maulana Khalid Rashid Firangi Mahali, a prominent Sunni cleric, countered Rizvi’s argument and asserted that the green flag was being used from the time of the Prophet and it is an Islamic flag. Muslims from any country carry green flags, he said. “It is a frivolous petition,” Khalid Rashid said. A senior journalist, Afsar Husain, said that Islam has no flag, but the crescent and the star were a symbol of Islam. He alleged that Rizvi was being patronised by the BJP government which is why he kept raising contentious issues.

A bench headed by Chief Justice Ranjan Gogoi has sought the government’s reply on the issue and asked Solicitor General Tushar Mehta to revert with a proper response in two weeks. 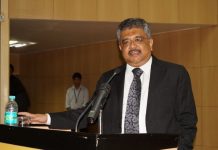