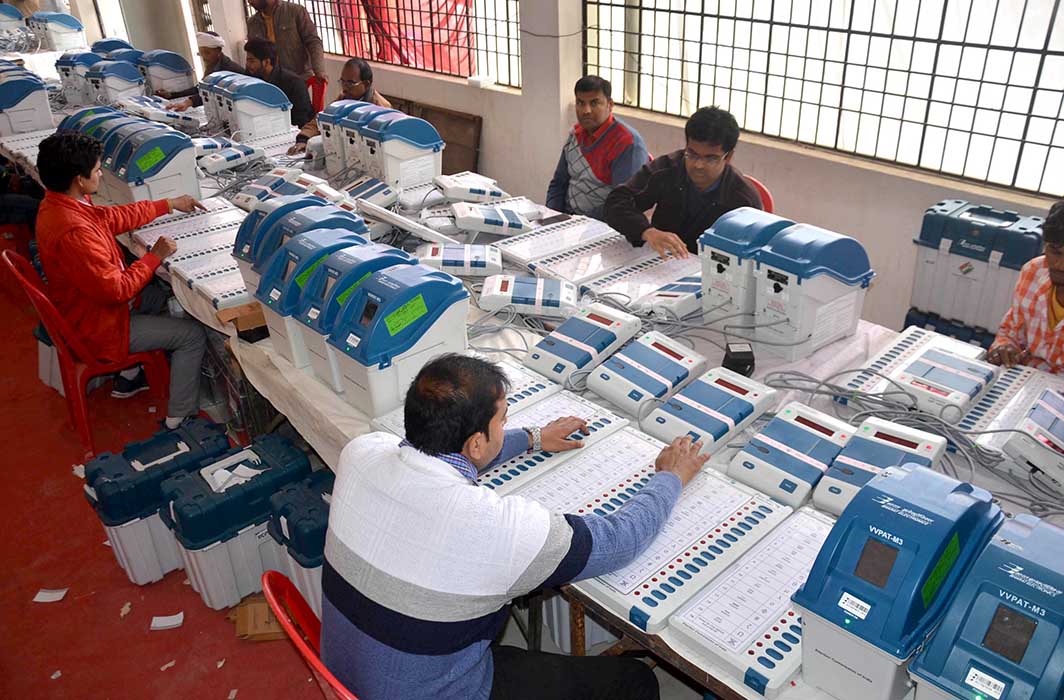 The Supreme Court has asked the Election Commission to increase the random sampling of VVPAT slips from one booth per assembly segment to five booths in the ensuing Lok Sabha polls.

The court order is a partial victory for the joint plea by 21 opposition parties that had demanded more VVPAT counting. “This will be greater satisfaction to not only political parties but voters also,” the bench of CJI Ranjan Gogoi and Justices Deepak Gupta, Sanjeev Khanna said.

At today’s hearing, the Senior Advocates Kapil Sibal and Abhishek Singhvi argued on the affidavits.

Sibal said that the court should decide constituency wise how many VVPATs have to be installed.

To which the counsel appearing for Election Commission said: “The ISI suggests 479 EVMs but we are doing 8 times of it. If we increase the number we will have infrastructural problems leading to delay in election results. We have to conduct a fair election.”

Sudip Jain, Deputy Election Commissioner presented the photograph of how VVPAT machines work. He says that the team is supervised by the returning officers. The rules are sequential. Because it has to be very carefully done the supervision of directing officer is made compulsory.

The bench said: “If the number of EVMs in respect of which the VVPAT is subject to physical scrutiny is increased from 1 to 5 the process of verification can be done by the same team. The number of EVMs would be 5 per constituency. We direct that the process of random selection would now apply to all the 5 machines which have been directed.  We express our reluctance to provide our view with respect  to the integrity of EVMs.”

21 different political parties had petitioned the court to direct the Election Commission for random verification of at least 50% of Electronic Voting Machines (EVMs) using the VVPAT in every assembly segment or assembly constituency.

The leaders asked the court to quash the EC’s notification that made paper audit trail checks mandatory in just one polling station in an assembly constituency. The leaders quoted the SC’s 1975 verdict in the Indira Nehru Gandhi v. Raj Narain case to bolster their argument that free and fair elections are part of basic structure of the Constitution. In a 2013 judgment, the SC held that VVPAT is an indispensable requirement of free and fair elections, thereby, argue the petitioners, making the system inherent and intrinsic to the very basic structure.

“The impugned guideline by EC hits at the basic structure of the constitution making VVPAT completely ineffective and merely ornamental in nature. It reduces the safeguards and substantive essence of the judgments of the top court. The petitioners submit that a procedural or executive instruction in the form of guidelines cannot render the main substantive safeguard nugatory, more so where the latter traces itself back to a constitutional provision,” stated the petition.

VVPAT machines, attached to EVMs, display the name of the candidate and his symbol on a paper after a vote is cast. The voter can see the paper through a glassed display for six seconds before it drops into a sealed container. While announcing the schedule of this summer’s general elections on Sunday, the EC had announced that VVPATs will be used in all polling stations along with EVMs.

The leaders approached the top court after the poll body refused to accept their representation in February.

A former EC official said the commission had concerns about increasing the matching to meet the demand of the opposition, since it would cause a delay in the announcement of results.

The controversy over the EVMS has been continuing since the assembly elections in early 2017, when the BJP won a massive victory in Uttar Pradesh. Mayawati and the Congress alleged that the voting machines had been tampered with on behalf of the BJP. Arvind Kejriwal, who party lost to the Congress in Punjab, had come up with similar elections.

None of the parties, however, turned up last year when the Election Commission challenged anyone to hack into the voting machines.