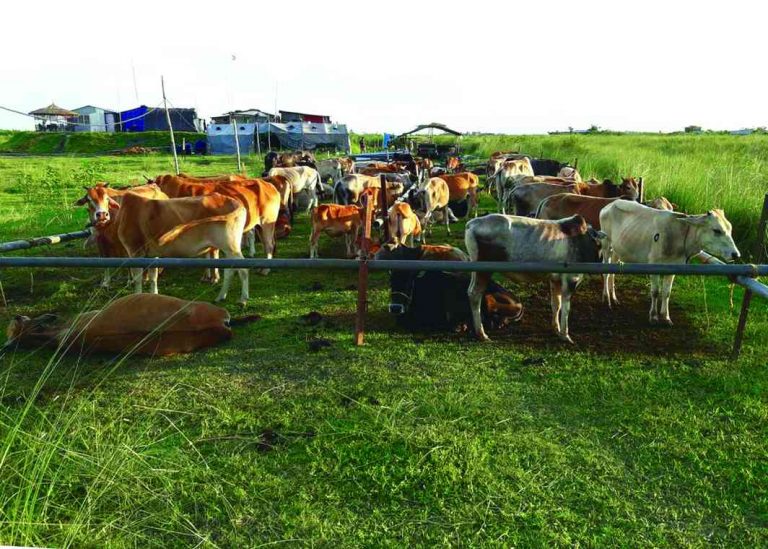 Above: 57 BSF Battalion seized around 100 cows at the Assam-Bangladesh border in Dhubri district. Photo: Twitter/@peteralextodd

As cattle smuggling thrives along the Indo-Bangla border with the connivance of security forces, the apex court intervenes to issue directions

While the Supreme Court in July stayed the contentious rule of cattle trade (no slaughter) restrictions that the Centre had sneaked in through the environment ministry, in early August the top court of the country also took cognisance of the fact that cattle markets within 20 km of the India-Bangladesh border do promote cattle smuggling. The court directed the Centre to ensure that such markets are not allowed.

Interestingly, this case was brought to the top court by the Akhil Bharat Krishi Goseva Sangh. Many such gau seva organisations had wreaked havoc across the country, killing 29 people in a spate of lynchings that provoked the court’s stay on the contentious cattle market (no slaughter) rule in the first place. On this count, though, the Akhil Bharat Krishi Goseva Sangh got it right.

Methods used by cattle smugglers are many. They include the following:

There is no end to innovation and, often combined with brute force, they grow in numbers each day.

However, the source of almost all such cattle driven across, are cattle markets—semi-legal and illegal—located roughly within the zone as described in the Supreme Court directive. The directive is based on intelligence reports. There are hundreds, if not thousands of such temporary “markets” sprouting, making deals and disappearing into the darkness each day near the border. The 20 km distance marker is an approximation, considering surreptitious transport logistics.

According to Banshi Dhar Sharma, IPS and recently-retired Director General of Police for West Bengal, the Supreme Court ruling is “a very good one, and in good time too”. Speaking to India Legal over phone, he said: “These cattle haats are a nuisance and are not only a security threat, but also a sure place where cattle smugglers take their pick of cattle, then run them across the border. This order has come at the right time.”

What is the modus operandi of these haats? “The trade is in cash and the cattle are mostly of non-milch variety,” he said. Milch cows form no more than 12 percent of the overall cattle smuggled. The preference is for bulls or oxen, for better taste. And why are security forces not being able to stop such a large scale operation—across West Bengal, Assam, Meghalaya and Mizoram (these are the border states)? “You have to first understand that the Indo-Bangladesh border (it is the fifth longest border in the world),” said Sharma. “The border is not all fenced, and cannot be. Twenty percent of the border is riverine, and there is little the security forces can do once you are midway across the river. This presents a huge logistical problem.

“Also, there is a huge amount of corruption within the security forces, mainly the BSF,” he said. Incidentally, Sharma was a Special Director in-charge of Eastern Command, BSF, Kolkata from May 28, 2012 to August 13, 2014. Hence he should know, and accepted that a section of the force he once headed (he was even, for a time with the BSF headquarters in Delhi) does itself often provide the smugglers a route through the border, obviously for a consideration.

The trade both ways is massive. Bangladesh’s beef export business is huge (vis-a-vis the entire GDP of that country). The entire beef business (domestic plus exports) in Bangladesh runs upwards of $3 billion a year and hundreds of thousands are employed in the process of slaughtering, providing cold storage facilities, packaging, transporting, loading, shipping et al. The demand, especially from the West Asian markets, is large and with Indian exports falling due to intervention from extreme right-leaning groups, the Bangladesh business is picking up. Moreover, the difference in cattle prices is a factor. A bull will be often less than a third the price in India as it would be in Bangladesh, making it more tempting a business prospect.

This business aspect has also seen corrupt politicians move into the fray, says Sharma. Hence those are two established holes in the entire scheme of the prevention of cattle smuggling. “You see, the smugglers get themselves and their cattle into the waters of the river. They drive them across the river with sticks and what can the security forces do? It is not possible to shoot them and it is not possible for the BSF to go after them into the water,” says Sharma. The smugglers are winning too. Each smuggler can benefit by up to Rs 3,000 for delivering a pair of bovines.

“It is best to cut off the source of such smuggling, which are these cattle haats,” he says. “Now, with the court’s directive, it becomes that much easier for the forces to intercept and dismantle such haats. They have a legal handle.”

How does one pinpoint these cattle haats, most of them held in the shadows of jungles and on the quiet? From 2014, the year the BJP came to power, data has been accumulated on seized cattle intended to be smuggled across the border. As per published reports, the data says that 1.5 lakh to 1.75 lakh cattle were seized every year, between January 2014 and December 2016. More than the numbers, the place of such seizure becomes important as the possible place of secretive haats. These will be under surveillance.

Also in focus now are “cattle corridors”, established zones of movement for big herds. These have been identified by the BSF on the Indian side, as well as by the Bangladesh Border Guards on the other. These exist around the towns of Khulna, Kustia, Rajshahi, Dinajpur, Rangpur, Mymensing, Sylhet, Comilla and Chittagong on the Bangladesh side, while many have been identified on the West Bengal side, which shares the longest part of the border (2,217km).

“Cattle from Nepal are also in this trade,” said Sharma. “That number is not that high, because Indian cattle fetch better prices in Bangladesh, but it does add substantially to the overall smuggling process.”

Interestingly, till the cruel process was banned, the festival of the Hindu deity Gadhimai (goddess of power) in Nepal, held every five years, used to see the slaughter of over 3,00,000 cows. Cows were illegally brought in by the thousands from India. That used to be the other smuggling route that now operates in the reverse, going all the way to Bangladesh.

“Overall, it is not just the cow smuggling, but the court order will positively affect the security environment,” Sharma said. “Human trafficking is difficult to determine in the area (ethnicity and language on either side is similar), and often the trafficked not only lie to get themselves through, but also help in the cattle smuggling, keeping the observant eyes of the BSF away.”