The Impleadment application has been filed in the suo motu proceeding initiated by the Supreme Court last year, considering the outbreak of Covid-19 virus 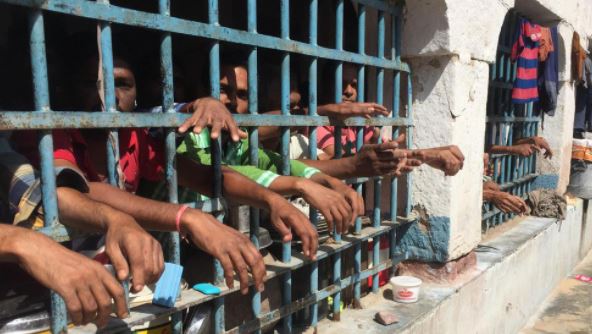 The Supreme Court has directed the high-powered committees constituted by the state governments and union territories to consider the early parole of prisoners by adopting the guidelines followed by them last year. This was considering the overcrowding in jails during the time of the Covid pandemic.

A special bench of Chief Justice N.V. Ramana, and Justices L Nageswara Rao and Surya Kant noted: “Requirement of de-congestion is a matter concerning health and right to life of both the prison inmates and the police personnel working. Reduction of impact of Covid¬19 requires this Court to effectively calibrate concerns of criminal justice system, health hazards and rights of the accused.”

The Impleadment application has been filed in the suo motu proceeding initiated by the Supreme Court last year, considering the outbreak of Covid-19 virus and its prospective spread in the overcrowded jails all over India.

Earlier, the Supreme Court had directed that, “Each State/Union Territory shall constitute a High Powered Committee comprising of (i) Chairman of the State Legal Services Committee, (ii) the Principal Secretary (Home/Prisons) by whatever designation is known as, (iii) Director General of Prisons, to consider the release of Prisoners who have been convicted or are under-trial for offenses for which the prescribed punishment is up to 07 years or less.”

Senior Advocate Colin Gonsalves appearing for the applicant submitted: “The High Powered Committees which have been constituted pursuant to the orders passed by this Court on 25.03.2020 should be directed to release all those prisoners who have been released last year on regular bail.”

“Such of those inmates who have been granted parole last year should be granted 90 days parole by this Court,” Gonsalves added.

In addition to this, Attorney General, KK Venugopal submitted:

“Prisons need to be decongested by release of some prisoners in view of the grim situation… High-Powered Committees may be permitted to adopt the procedure that was followed earlier and release the prisoners on the basis of the guidelines formulated by them last year.”

Whereas, the apex court observed, “India has more than four lakh prison inmates. It is observed that some of the prisons in India are overburdened and are housing inmates beyond optimal capacity.”

However, as the first measure, the bench noted, “being the sentinel on the qui vive of the fundamental rights, needs to strictly control and limit the authorities from arresting accused in contravention of guidelines laid down by this Court in Arnesh Kumar v. State of Bihar (supra) during pandemic.”

The bench has further directed the High-Powered Committee to release all the inmates who had been released earlier pursuant to our order 23.03.2020, by imposing appropriate conditions in addition to considering fresh release.

The Apex Court has also directed to release inmates who were granted parole, pursuant to its earlier orders, for a period of 90 days in order to tide over the pandemic.

“Moreover, all the decisions of High-Powered Committees need to be published on respective State Legal Service Authorities/State Governments/High Courts websites in order to enable effective dissemination of information”, the bench added.