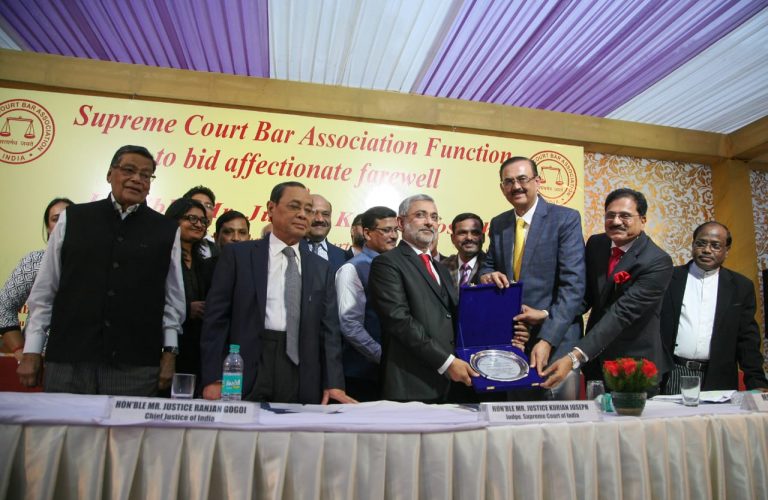 Above: Justice Kurian Joseph being presented memento by SCBA officer bearers and fellow judges at his retirement/Photo: Anil Shakya

On his last working day in the Supreme Court, Justice Kurian Joseph was given a warm farewell by the members of the bar and the bench, bringing to an end an illustrious career that spanned over four decades.

“We were from two different parts of the country but somehow we kept in touch. He is a personal friend. Kurian, thank you,” said the Chief Justice Ranjan Gogoi as he wished his brother judge well and the retiring judge could not hide his emotions even as he responded by saying he doesn’t intend to get emotional. “I promise not to get emotional. My wife Ruby said if you become emotional, you aren’t getting back home today,” he joked.

The farewell was organized by the Supreme Court Bar Association (SCBA).  Justice Joseph was elevated to the Supreme Court in March 2013. Before that he was a judge of the Kerala High Court and later the Chief Justice of the Himachal Pradesh High Court.

On his last day, as is the custom, Justice Joseph sat with the CJI Gogoi in courtroom No 1, where his family members were also present. While senior Supreme Court advocate and former Attorney General, Mukul Rohatgi said that Justice Joseph is the “most popular judge with a smile,” others like Attorney General KK Venugopal, Vikas Singh, the president of the SCBA and Senior Advocate Indira Jaising profusely praised the way Justice Joseph “handled cases with sensitivity and a human touch.”