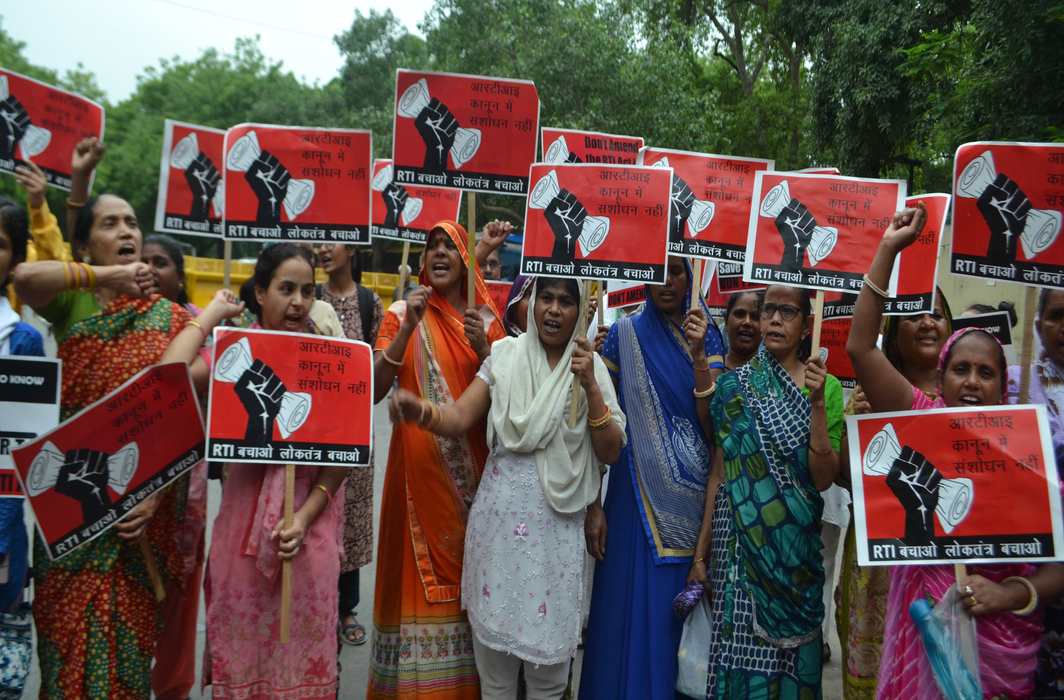 Above: A protest against changes to Right to Information Act in New Delhi/Photo: UNI

The Supreme Court ruling that the office of the chief justice comes under the RTI Act should be hailed. At the same time, transparency in judicial appointments should be juxtaposed with confidentiality of deliberations

This is a moment of national rejoicing. The Right to Information (RTI) has received a parting gift from outgoing Chief Justice of India Ranjan Gogoi and a grateful nation must applaud him and his brethren—Justices NV Ramana, DY Chandrachud, Deepak Gupta and Sanjiv Khanna—who ruled that the office of the CJI comes under the transparency law. The principal decision, authored by Justice Sanjiv Khanna (and signed by all the Justices), makes for compelling reading as an authoritative judicial premier on the RTI Act.

The clarification and systematisation of the conflicting provisions of the RTI Act are very valuable. Equally so is the show of judicial unanimity, although Justices Ramana and Chandrachud issued separate concurring opinions. Most welcome is the iteration of the apex court’s wisdom (in an observation made in 2002): “The right to…information in democracy is recognised all throughout and it is a natural right flowing from the concept of democracy.” The contrary view that believes that governance is best promoted by weakening the RTI regime (or none at all) overlooks the fact that about four to six million people file RTI applications annually and the number is on the rise. Recent amendments to the RTI Act have caused much public concern among some past Information Commissioners and civil society actors. Justice Madan Lokur has made some caustic remarks about “regressive” changes in the RTI law regime.

It would be churlish to practice fancy equine dentistry by looking a gift horse in the mouth! But clearly, there is something amiss with a judicial system that on the one hand resoundingly affirms the organic linkages between the RTI and national democratic development, and on the other, takes nearly a decade to adjudicate specific conventions.

Even now, proceedings in two crucial appeals are referred back to the information officer concerning matters pertaining to the elevation and transfer of Justices made by the Collegium. Final disposal occurs merely on the concerning information on assets declared by Justices to the CJI. This is henceforth to count as public information and doing so will not entail any breach of the fiduciary relationship and privacy (leading to a chilling effect on would-be elevates or transferees).

But a single Justice of the Delhi High Court (recently elevated to the Supreme Court) in a plea filed by veteran RTI activist Subhash Chandra Agrawal had already held so in 2009. What is more, rejecting the ground that the office of the CJI was not covered under the RTI Act, Justice Ravindra Bhat memorably ruled that “all power—judicial power being no exception—is held accountable in a modern Constitution”.  It is not unbecoming, even as the apex court decision is celebrated, to ask why citizens should be subjected to a decade-long delay in reiteration of this simple basic principle.

The two other appeals, no doubt, raised certain complicated issues concerning transparency and efficiency of the workings of the judicial collegiums. One appeal based on a report in an English newspaper involved allegations that a minister had approached a Justice of the Madras High Court through a lawyer to influence his judicial decisions. The appeal asked for disclosure of the complete correspondence with the then CJI. The other related to detailed information about Justices HL Dattu, AK Ganguly and RM Lodha superseding the seniority of Justices AP Shah, AK Patnaik and VK Gupta. We hasten to add that the same issues would arise in other methods of judicial elevations and transfers too.

Is there prima facie evidence to show that any disclosure of information impairs instructional efficacy? Should it be protected always in the public interest? Then there is concern about the independence of the judiciary. Then CJI Gogoi had reportedly observed on the concluding day of the hearings that while nobody “wants a system of opaqueness” we “cannot destroy the institution of the judiciary… in the name of transparency”.

Justice Sanjiv Khanna had described the questions of judicial appointments, as “one of the most delicate and complex areas”. He pointedly referred to a conflict between “[t]ransparency and openness in judicial appointments juxtaposed with confidentiality of deliberations”.  He noted some steps “have been taken to make the selection and appointment process more transparent and open” and hoped that the “position will keep forging new paths by taking into consideration the experiences of the past and the aspirations of the future”.

Justice Chandrachud added that future steps should include enunciation of crucial norms such as (a) experience “as reflected in the quantum and nature of the practice”; (b) domain specialisation in “areas which are geared to the evolving nature of litigation and the requirements of each court; (c) income requirements, if any, “having regard to the nature of the practice and the circumstances prevailing in the court or region concerned”; (d) the “commitment demonstrated by a candidate…to the development of the law” (in terms of written work, research and academic qualifications)”; (e) the “social orientation of the candidate” (whose measure may not be only pro bono work), and (f) social inclusivity in the process of making judicial appointments. He added that such criteria should be placed “in the public domain” which will “fulfil the purpose and mandate of Section 4 of the RTI Act, engender public confidence in the process and provides a safeguard against extraneous considerations entering into the process”.

This is, indeed, an inaugural discourse of a Constitution bench which the judicial collegium has now to fully consider and adopt. Though acute difference of opinion on some criteria (such as social “inclusivity”, commitment to the development of law) may arise, the desirability and doability of such enunciation cannot be gainsaid. How far all this will satisfy critics of the collegium system (fully noted in the judgment) remains to be seen because ultimately, even creative acts of discretion will always leave a residue of disappointment in a highly competent pool of aspirants to elevation.

We must note that primary constituencies of this verdict are Public Information Officers in whom the RTI vests the tasks of balancing “information” with “privacy”. Justice Chandrachud repeatedly tells them that a “balance” has to be struck “creatively”, and with reason because reason “forms the heart of the law”. Information officers “must provide cogent and articulate reasons for the factors considered and conclusions arrived at in balancing the two interests”. And the principal function of the apex court is to set out an “analytical approach” that they must follow in “balancing the interests in disclosure with the countervailing privacy interests”. The Supreme Court decision is only secondarily addressed to the RTI appellate authorities. Justice Chandrachud is most categorical in saying that what Justices have declared as their assets “does not constitute the personal information of the judges and does not engage the right to privacy”. But Civil Appeals Nos 1044 and 1045 of 2010 stand remanded to CPIOs (Central Public Information Officers), who have now to examine and apply “the principles set out in the present judgment”.

Here lies the rub. A 2016 study by Research, Analysis and Communications Group and Satark Nagrik Sangathan demonstrates a situation of “illegal orders” by RTI Commissions. Such orders are often found based on:

This is an alarming situation, especially if true nationwide, and calls for concerted action by the apex court, RTI adjudicators and activists.