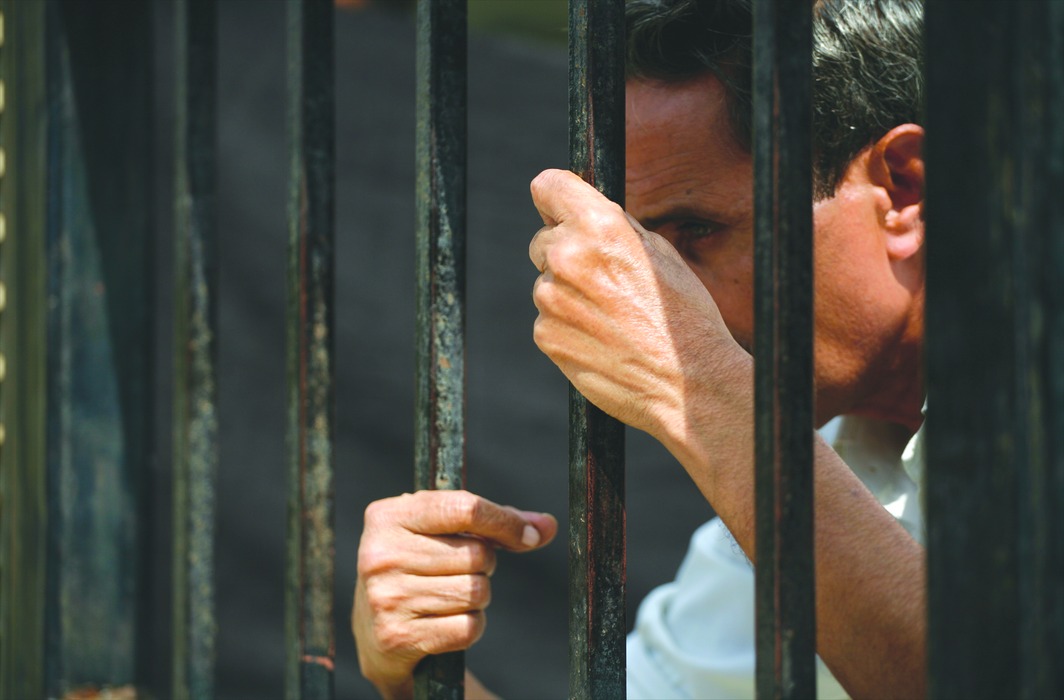 A remedy to reduce the number of those behind bars due to delays by High Courts in hearing their appeals, continues to be elusive. The top court has now stepped in to apply some arm-twisting

On November 1, a court in Rampur, Uttar Pradesh, convicted six accused, including two Pakistani nationals, in the attack on a Central Reserve Police Force camp in Rampur in 2008 in which seven jawans of the paramilitary forces and a civilian were killed. Four of them were sentenced to death, while the remaining two were sentenced to life and 10 years’ imprisonment, respectively. Mohammad Kausar (a resident of Pratapgarh) and Gulab Khan (a resident of Bareilly), accused of hiding the weapons used in the attack, were, however, acquitted after they spent 11 years in Bareilly Central Jail.

While Kausar and Khan are unsure whether their acquittal can help them get rid of the “terrorist” tag, those among the six accused must be anxious to get relief in the form of bail, as and when they file their appeals in the Allahabad High Court against their convictions. It would not be a surprise if those convicted knock at the Supreme Court’s doors for interim bail, if the High Court neither grants them bail nor ensures expeditious hearing of their appeals.

The judicial remedy for those behind bars mainly because of the inordinate delay by the High Courts in hearing their appeals against their conviction by the trial courts continues to be elusive despite periodic concern expressed by the Supreme Court. 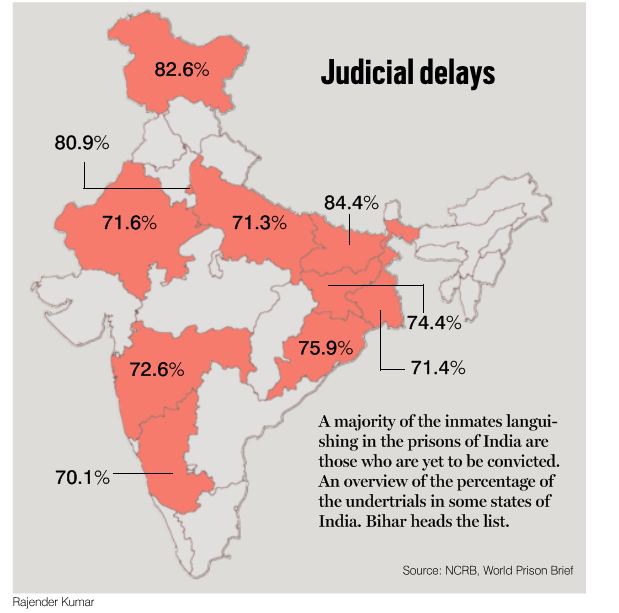 In the latest instance, the Supreme Court bench of Chief Justice of India Ranjan Gogoi and Justice Surya Kant, on November 4 considered an appeal filed by a convict, Khursheed Ahmad, who sought early release from prison in view of the inordinate delay by the Allahabad High Court in hearing his appeal against conviction and sentence by the trial court in a case of murder.

The Allahabad High Court had returned a finding in this case that the trial court had misread the evidence on record and convicted five of the co-accused, who had been in jail from the date of their conviction, that is, January 25, 2017. As the body of the deceased was recovered at the pointing out of the appellant, Ahmad, the High Court denied him bail during the pendency of his appeal. The prosecution opposed the release of the co-accused on bail, because they are related to Ahmad, and therefore their participation in the crime could not be ruled out. But the High Court disagreed and concluded that the five co-accused were entitled to be released on bail. “So far as appellant Khursheed Ahmad is concerned, without expressing any opinion on the merits of the case, and considering the submissions advanced, … no good ground is made out for enlarging the appellant Khursheed Ahmad,” the High Court bench, comprising Justices Vivek Kumar Singh and Ramesh Sinha, held in its order on October 9, 2017.

The Supreme Court bench later noted: “The appellant (Khursheed Ahmad) is in custody for over three years. The appeal before the Allahabad High Court is not likely to be heard immediately unless an order of expeditious hearing is passed either by this Court or by the High Court. No order of expeditious hearing ought to be passed by any court without good and cogent grounds as the same may affect other litigants whose appeals are similarly pending.”

The Supreme Court bench continued: “Yet, at the same time, the inability of the High Court, for reasons beyond its control, to bring the criminal appeal(s) to an early conclusion should not result in a situation where the accused persons are to be released on bail on the aforesaid ground. All these questions would require due consideration.”

The bench then requested Solicitor General, Tushar Mehta to assist the Court in evolving, if possible, solutions to the problem that the present case confronts it with. Those who watched the court proceedings on November 4 could not, however, avoid a sense of deja vu and recall similar sentiments expressed by another bench earlier.

Ramu, a prisoner, sentenced by a trial court to imprisonment for life for the offences of rioting and murder in 2007, and lodged in District Jail, Unnao, Uttar Pradesh, first appealed against his conviction in the Allahabad High Court. As the appeal remained pending for a decade, he sought bail from the High Court in the meantime. When the High Court rejected his prayer for bail, he moved the Supreme Court, which too was not inclined to interfere with the High Court order under challenge.

However, the Supreme Court bench of Justices J Chelameswar, Abhay Manohar Sapre and Amitava Roy, on March 31, 2017, directed the High Court to decide his appeal within a period of four months. The bench so directed because, having regard to the huge pendency of cases, including criminal appeals, before the High Court, it would, in the normal course, take several more years for the disposal of the appeal.

On February 6, 2018, the Supreme Court bench of Justices Chelameswar and Sanjay Kishan Kaul released the petitioners in the case as they had gone through a detention period of almost 16 years, including the remission period, and their conduct was found to be good, and they were working as convict officers in the jail administration.

In 2017, the Supreme Court had also directed the registrar general of the Allahabad High Court to furnish particulars of criminal appeals pending before it year-wise with the stages thereof, institution and disposal statistics of the last 10 years; average disposal time of the appeals; the identified causes for the delay; steps already taken and in contemplation for tackling such causes and accelerating the disposals; mechanism in place to oversee the process, and progress recorded. The Allahabad High Court furnished the relevant details to the Supreme Court subsequently.

Similar direction was issued in another matter arising from the Madhya Pradesh High Court, which too furnished similar information to the Court.

On April 12 this year, while hearing the case of Ratan Singh vs State of Madhya Pradesh, the Supreme Court bench of Justices Uday Umesh Lalit and Indu Malhotra noted that statistical data made available by the High Courts of Allahabad and Madhya Pradesh not only needed to be revised but similar data in respect of all the High Courts in the country must also be made available before any concrete recommendations or suggestions could be made in these PIL matters. The bench, therefore, directed the registrar-generals of all the High Courts in the country to furnish information on the same parameters. “List these matters for further consideration on 09.07.2019”, the bench directed in its order. But the matter was not taken up on July 9 or on July 16, when it was adjourned. The case is now likely to be heard by Justices Lalit and Vineet Saran on December 13.

While the order of the Lalit-Malhotra bench expanding the ambit of the case to include all the High Courts in the country to get an exact picture of pendency of criminal appeals deserves appreciation, it appears that the original objective of a pilot study, initiated by the Justice Chelameswar-led bench in 2017, was apparently lost in the subsequent hearings of the case.  What indeed were the suggestions rendered by MN Rao, senior advocate, appointed as amicus curiae in this case on January 5, last year, and why the Lalit-Malhotra bench found them inadequate, is unclear.

The Chelameswar-led bench had observed in its order in 2017: “The choice of the High Court, we may clarify, is only in view of the extent of pendency and the frequently expressed concern over the relatively longer disposal time in the adjudication of the criminal appeals before it, which as well is noticeable from the contemporaneous records. We wish to state that the selection of the High Court by no means is an indication of any deficiency in the functioning or the ongoing endeavours on its part in addressing the issue and ought to be viewed as a step, if possible, to reinforce the same in the espousal of a public cause founded on the cherished right of personal liberty, however, in accordance with law.”

The bench had emphasised that not only the custodial restraint of those detained has to be sanctioned by law, any undue and unjustified delay in the redressal processes initiated by them would have the potential of their detention being adjudged as violative of their constitutionally secured right to fair and speedy justice.

The Allahabad High Court’s reply to the Supreme Court in Ramu’s case revealed that as many as 14 criminal appeals filed nearly 40 years ago were still pending disposal. Of these, two were filed in 1976, four in 1977 and eight in 1978. More than 13,600 criminal appeals were reportedly pending for more than 30 years in various High Courts.

The Allahabad High Court has, reportedly, told the Supreme Court that one of the main reasons for delay is the almost 50 percent vacancy in judges’ posts as the High Court has only 84 judges, as against the sanctioned strength of 160. According to the High Court, the average disposal time of an appeal is about 11.39 years. The High Court has attributed to its lack of sufficient number of skilled employees its failure to utilise e-courts and technology to expedite hearing of cases.

However, a study by the NGO, Daksh, has revealed that between 45 and 55 percent of the court time is spent on non-substantive issues, such as re-issuing summons, fixing dates for future hearings, and similar case administration decisions.

Delegating these functions to an administrative officer would give every judge nearly double the time each day for dealing with substantive matters, and could significantly improve day-to-day efficiency, it has suggested.