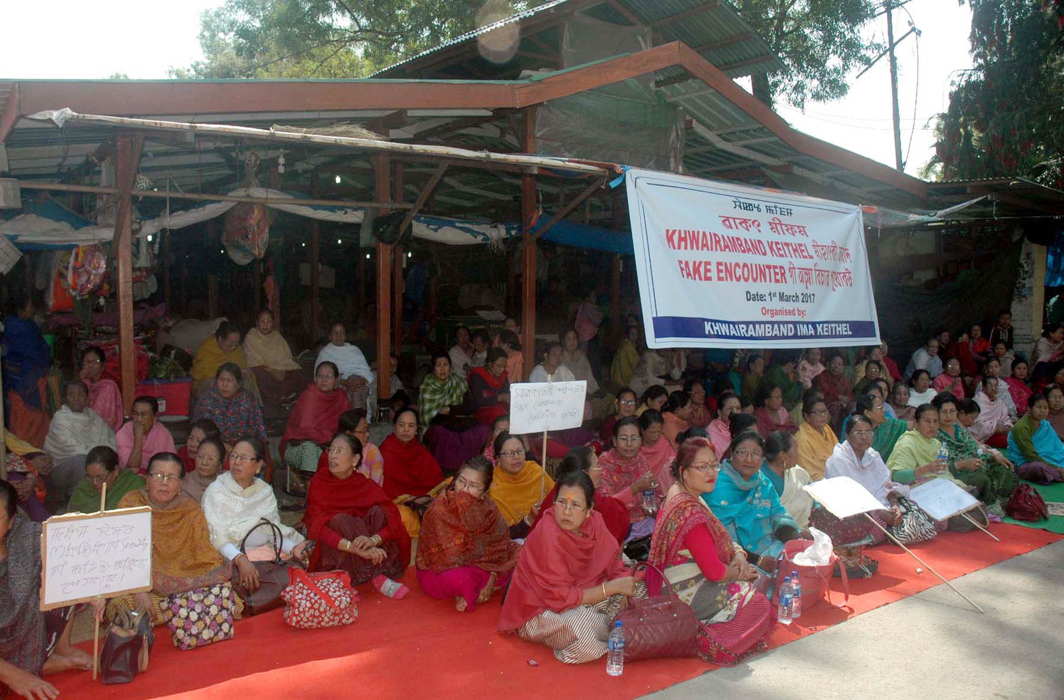 Above: Protesters in Imphal demanding a probe into fake encounter cases

“There are 15 murderers roaming around Manipur, what will happen to society?”

At the receiving end of the honourable judge’s ire was Central Bureau of Investigation (CBI) Director Alok Verma who had been summoned by the Court and questioned about the agency’s delay in filing chargesheets in cases of murder of innocent civilians, criminal conspiracy, and not bothering to make arrests. “If somebody commits rape, what is there to recover? So you will allow him to roam free?” Justice Lokur asked, urging the CBI chief to understand the impact the delay would have on society.

The case pertains to the over 1,500 alleged extrajudicial killings in Manipur between 1979 and 2012. In 2012, an association called Extra Judicial Execution Victim Families Association had filed a petition in this regard and alleged that no action had been taken against the people involved.

However, close on the heels of the Supreme Court rap, on August 2, the CBI for the first time booked an Army officer, Major Vijay Singh Balhara, in connection with the killing of a 12-year-old boy in Imphal West in 2009.

The Supreme Court had appointed a Commission which filed its report in 2013. The report stated, among other things, that security forces, based on their intelligence inputs and without verifying them, used to resort to indiscriminate firing which resulted in killing of innocents.

In the past, the Court had more than once come down heavily on the centre for its inept handling of the case. Once, when the centre’s counsel claimed that compensation had been paid to the families of the victims—in a way, an admission of wrongdoing—the Court shot back that compensation was hardly the preferred avenue, or else “all heinous crimes” would be settled that way, overriding the law of the land.

In 2015, when the centre made the same argument, the Court said: “Now it’s like you kill 10 people, pay compensation and the matter ends.”

A division bench of Justices Madan B Lokur and UU Lalit had asked the CBI to file the final reports in four alleged fake encounter cases by the Indian Army, Assam Rifles and the police in Manipur, earlier in July. The Supreme Court in 2017 had directed the CBI to set up a Special Investigating Team (SIT) of five officers to look into the case. The bench slammed the SIT appointed by the CBI for delay in probing the case. The bench ordered the CBI director to be personally present on July 30, 2018, to explain the delay in filing the chargesheet in the alleged fake encounter deaths despite the Court’s orders.

Additional Solicitor General Maninder Singh had apprised the Court that the delay on the part of the CBI was not intentional or deliberate, and the agency was in the process of vetting the chargesheet which had been prepared. To this, Justice Lokur observed: “Tell your people to quit if they cannot do this job. If they cannot do it, tell them to quit.” The bench strongly showed its dissatisfaction with the delay and called the SIT probe a game of “snakes and ladders”, “going up and down…up and down… and we are tired of this”.

One reason cited for the delay is the multi-layer scrutiny, which is a process followed by CBI investigations. It was submitted that the layers could be ended with the permission of the CBI director. The bench then suggested that all the officials part of this multi-layer scrutiny discuss and clear the cases immediately. However, advocate Menaka Guruswamy, amicus curiae in the case, drew the Court’s attention to Section 19 of the CBI manual which had no mention of a multi-layer setup, as the CBI claimed.

The CBI director then accepted the fact that the multi-layer scrutiny setup is an internal arrangement and said that they would decrease the layers. The bench took cognisance of the fact that the official in-charge of the SIT was a DIG-rank official who had already been promoted to IG. The CBI director apprised the bench that initially 52 cases were shortlisted for investigation, but the number reduced to 41 with 86 victims, as some cases had been found unfit.

After hearing the arguments, the bench gave directions to the CBI, including reducing the multi-layered scrutiny to only two layers, and said the entire exercise had to be carried out within three weeks.

The CBI director assured the bench that five more chargesheets would be filed before August 1. The Court then listed the matter for August 20, 2018 and told Verma to be personally present once again on that day to give updates on the steps taken by the agency.

Although the apex court made many observations and criticised the CBI, summoning of the agency chief was a clear signal that it meant business. What remains to be seen now is how the agency carries the probe further and subjects the perpetrators of such brutality to justice.