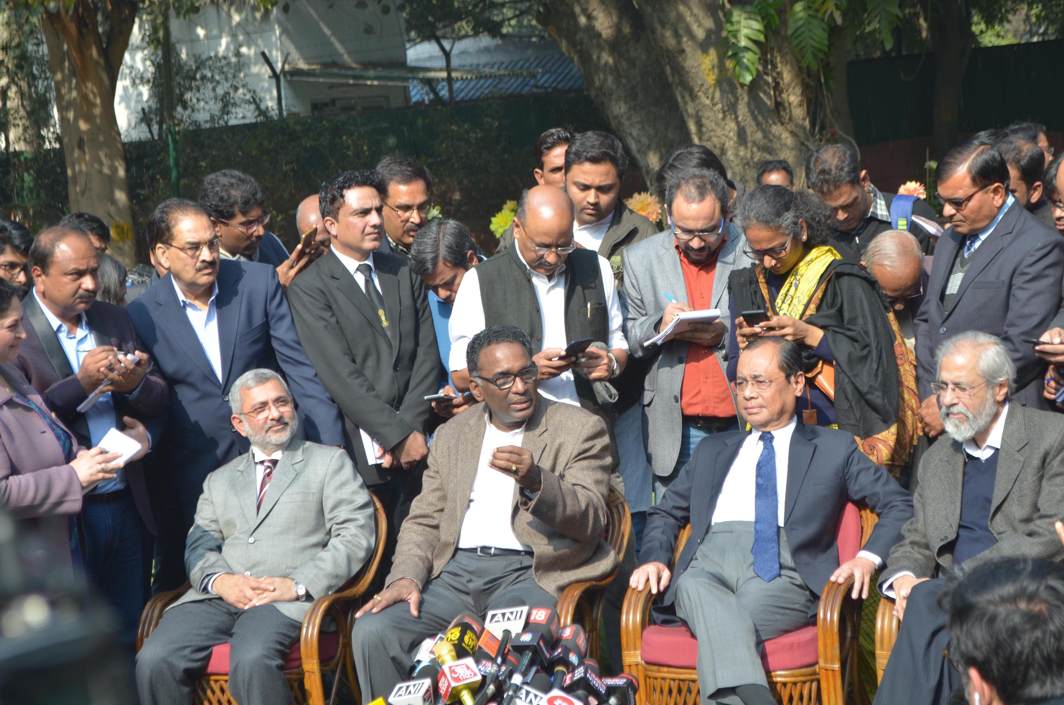 When the four judges of the Supreme Court—Justices Jasti Chelameswar, Ranjan Gogoi, Madan Lokur and Kurian Joseph—“revolted” against Chief Justice Dipak Misra, they were primarily irked by two issues—their involvement in the finalising of the Memorandum of Procedure (MoP) and allocation of cases to specific benches. This related specifically to the case dealing with the death of CBI special judge BH Loya, who was presiding over the fake encounter case of Sohrabuddin Sheikh.

The MoP deals with the procedure of appointment of judges to the higher judiciary and is an issue where the Executive and the Judiciary don’t see eye to eye. The judges had said that “when the MoP was the subject matter of a decision of a Constitution Bench of this court, in Supreme Court Advocates-on-record Association and Anr vs Union of India, it is difficult to understand as to how any other bench could deal with the matter”.

The rift between the collegium, comprising of the chief justice and these four senior judges, and the Executive came out in the open recently in the case of Uttarakhand Chief Justice KM Joseph. He had been recommended by the collegium on January 10, 2017, to be elevated as a judge in the Supreme Court. The other name which was recommended at the time was Indu Malhotra, a senior advocate of the Supreme Court. So far, Malhotra’s elevation—she would be the first woman advocate to directly join the Supreme Court bench without being a judge—has not seen any hurdle.

The collegium had made a strong recommendation for Justice KM Joseph as a Supreme Court judge and had said that he was “more deserving and suitable in all respects than other Chief Justices”. However, the government was not too keen, and the reason for its unhappiness was that a Uttarakhand High Court bench headed by Justice Joseph had in 2016 set aside the order imposing President’s Rule in the hill state. It was a huge victory for the opposition and a moral defeat for the centre.

In such a scenario, the MoP gathers immense importance, not only because the government has yet to okay the procedural recommendations that the top court had sent to it, but the Executive has been finding every occasion to bring it up. On Constitution Day (November 24 last year), Law Minister Ravi Shankar Prasad had brought up the Justice CS Karnan issue and hinted darkly that maybe Karnan’s assertions (of corruption within the judiciary) could have been looked into. The Karnan episode has been an Achilles’ Heel for the judiciary.

It has been alleged in the media and elsewhere that the fact that these four judges had been kept out of a constitution bench that will decide eight important cases (Aadhaar included), meant that the CJI was “getting back” at them.

However, the issue of allocation of cases also saw four former judges—Justice PB Sawant, a former Supreme Court judge; Justice AP Shah, former Chief Justice of the Delhi High Court; Justice K Chandru, a former judge of the Madras High Court and Justice H Suresh, a former judge of the Bombay High Court—writing a letter to the CJI, advising him not to let “junior” judges “arbitrarily” head benches in important cases. They said: “This issue needs to be resolved and clear rules and norms must be laid down for allocation of benches and distribution of cases, which are rational, fair and transparent.”

Chief Justice Misra is due to retire in October and the tradition has been that the retiring chief justice recommends his successor. It remains to be seen if Justice Gogoi, who is next in line, gets that recommendation.

The other major issue in which the four senior judges had expressed displeasure was the allocation of cases. Technically, while the CJI is the master of the roster and the administrative head of the court, all judges of the top court are held to be equal, with the CJI being only “first among equals”. However, a letter from the four judges to the chief justice implied that it apparently wasn’t so.

The letter criticised the “Master of Roster” power and said: “(The) convention of recognising the privilege of the Chief Justice to form the roster and assign cases to different benches of this court is a convention devised for the efficient functioning of the court, but it is not a recognition of any superior authority, legal or factual, over his colleagues.”

The judges reportedly said that “there have been instances with cases bearing far reaching consequences for the nation and institution has been assigned by the Chief Justice of this court selectively to the benches of their preferences without any rational basis for such assignments. This must be guarded against at all costs”.

The allocation of the Loya case—it is with a bench of the chief justice—seems to be a case in point, say insiders and it saw many heated exchanges in the Supreme Court. Initially, the case was allotted to a bench which had Justice Arun Mishra in it. But as questions were raised over its allocation, Justice Mishra virtually broke down under pressure and not only adjourned the case but directed senior counsel Harish Salve (who was representing the Maharashtra government) to hand over all relevant documents to the petitioners seeking a probe. Salve said that sensitive parts be blacked out, but Justice Mishra disagreed, saying that the petitioners should know everything. The order in this case said: “Let the documents be placed on record within seven days and if it is considered appropriate copies be furnished to the petitioners. Put up before the appropriate bench.”

That had raised questions and when the rebel judges called for its reallocation to an “appropriate” bench, they were obviously talking about those within the collegium. Whether it was a justified claim remains debatable, but when the judges said in their press conference that there was no politics involved and that they simply had to take this step “so that 20 years down the line wise men do not say that the four judges had sold their souls”, some sort of impropriety was implied.

Justice Arun Mishra’s name was not mentioned by the four judges, but when a question was asked during the press conference held by them on whether their protests had anything to do with the allocation of the Loya case, Justice Gogoi said “yes”. Justice Mishra had said that he has been working hard and was overburdened. In his “defence”, he had said that even before, other chief justices—TS Thakur and JS Khehar—had assigned tough cases to him. He is said to have told the four judges that he was unnecessarily targeted in the controversy and had sincerely discharged his duty as a judge.

While Chief Justice Dipak Misra was taking an emotional Justice Mishra to his chamber, Justice Chelameswar put his arm around his junior’s shoulder and told him that it had only been about issues and not any particular judge.

Nonetheless, allocation of cases is a serious issue and Justice Arun Mishra had found himself in the firing line over this issue.

—With inputs from Navank S Mishra