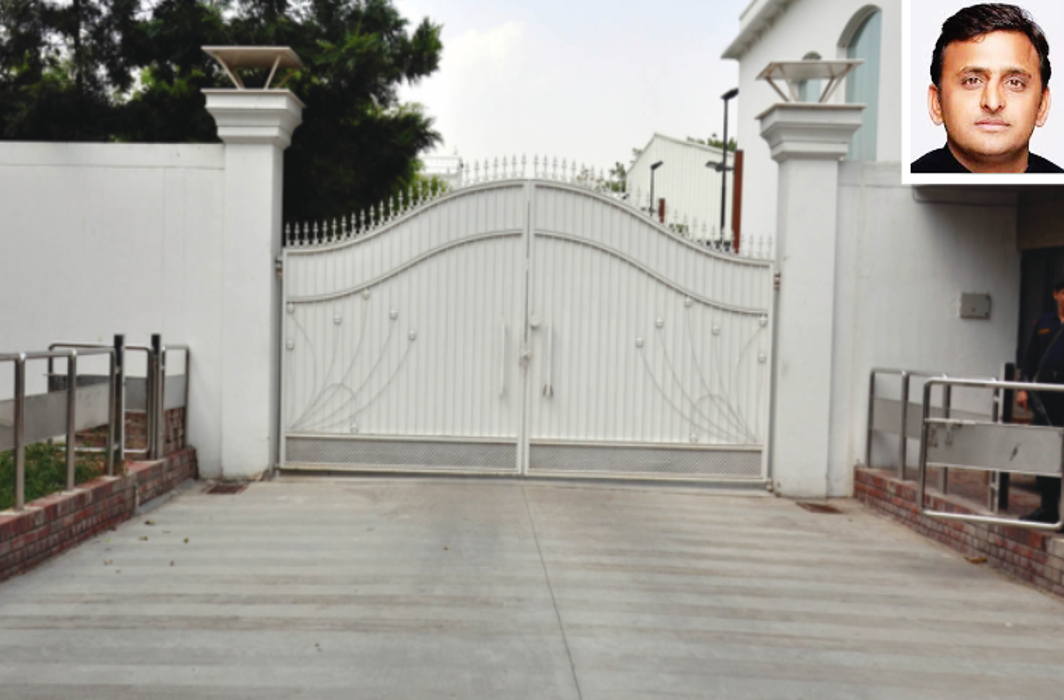 Above: The bungalow occupied by ex-CM Akhilesh Yadav

In a landmark judgment delivered on May 7, the Supreme Court bench of Justices Ranjan Gogoi and R Banumathi held that former holders of public office cannot be treated as a special category of persons entitled to special privileges. Once they demit office, there is nothing to distinguish them from the common man; the public office held by them becomes a matter of history, the bench added.

The chief minister, once he demits office, is on a par with the ordinary citizen, though by virtue of the office held, he may be entitled to security and other protocol. But allotment of a government bungalow, to be occupied during his lifetime, would not be guided by the constitutional principle of equality, the bench has ruled.

Observing that government bungalows constitute public property which by itself is scarce and meant for use of current holders of public office, the bench declared Section 4(3) of the Uttar Pradesh Ministers (Salaries, Allowances and Miscellaneous Provisions) Act, 1981, ultra vires of the Constitution as it transgresses the equality clause under Article 14.

As former CMs of UP continued to occupy their official accommodation even after demitting office, in a clear breach of Section 4 of the 1981 Act, as it had then existed, a writ petition was first filed before the Allahabad High Court by Lok Prahari, an NGO, through its general secretary, SN Shukla, a former civil servant. During the pendency of the writ petition, a set of rules, namely “U.P. Ex-Chief Ministers Residence Allotment Rules, 1997” were framed to provide for allotment of government accommodation to former CMs.

When Lok Prahari challenged these Rules as well, the state government promised the High Court that former CMs would be allotted only Type V bungalows, and that too on payment of rent, etc. As the High Court closed the case on the basis of this statement, Lok Prahari filed a writ petition in the Supreme Court, challenging the validity of the 1997 Rules. On August 1, 2016, the Court struck down the 1997 Rules on the ground that they were in conflict with Section 4 of the 1981 Act.

The Court also took note of the fact that no other dignitary holding a constitutional post is given such a privilege.

Following this, the state government amended Section 4 of the 1981 Act in 2016. Under Section 4(3), which was brought in by the amendment, former CMs became entitled to allotment of government accommodation during their lifetime. Lok Prahari again challenged the validity of this amendment in the Supreme Court.

Under Section 4 of the Act before the amendment, each minister was entitled, without payment of rent, a residence in Lucknow throughout the term of his office, and for a period of 15 days thereafter. This would be furnished and maintained at public expense on the prescribed scale. Section 4(3) required a government residence to be allotted to a former CM at his request for his lifetime on payment of such rent as may be determined from time to time by the estate department of the state government.

During the pendency of the petition in the Supreme Court, the bench sought the responses of the centre, and all the states and Union Territories as the issues being dealt with in Uttar Pradesh might arise elsewhere too. The Court received responses from the centre and the states of Assam, Bihar, Tamil Nadu and Odisha.

The centre informed the Court that government accommodation is provided to former presidents, vice-presidents and prime ministers as the same has been approved by the Supreme Court in Shiv Sagar Tiwari v Union of India and others, which was decided in 1997. In this case, the Court felt that “keeping in view the very high constitutional position occupied by the President, Vice-President and Prime Minister, they should be accommodated in government premises after demitting of office by them, so that the problem of suitable residence does not trouble them in the evening of life”.

Among the states which responded, Tamil Nadu and Odisha have no provision for official accommodation to former CMs. In the case of Bihar and Assam, however, such provision has been made by the executive instructions issued by the state under Article 162 of the Constitution.

The Court reasoned that in a democratic republican government, public servants entrusted with duties of a public nature must act in a manner that reflects that ultimate authority is vested in the citizens. And it is to the citizens that holders of all public offices are eventually accountable, it said. Such a situation would only be possible within a framework of equality and when all privileges, rights and benefits conferred on holders of public office are reasonable, rational and proportionate.

The Court relied on its previous ruling in the case of allocation of 2G Spectrum, in which it held that as natural resources are public goods, the doctrine of equality must guide the state in determining the actual mechanism for distribution of natural resources.

Although the rights of the petitioner did not suffer because of the 2016 amendment, the Court took the view that in PIL cases like this, the infringement of rights of a class would be the predominant factor justifying its intervention. In this case, it is obvious that the rights of tax payers as a class were involved, as the state was subsidising government accommodation for former chief ministers out of the tax revenues collected from citizens.

The Court also held that the 2016 amendment of the 1981 Act was an attempt to overreach the earlier judgment of the Court which had struck down the 1997 Rules. This is significant as the state government apparently contended that the legislature was entitled to alter the basis of the court’s judgments.

The Court concluded that natural resources, public lands and public goods like government bungalows/official residences are public property that belong to the people of the country. The doctrine of equality, which emerges from the concepts of justice and fairness, must guide the State in the distribution and allocation of the same, it held.

Although the amicus curiae in the case, Gopal Subramanium, had justified the denial of government accommodation even to former presidents and prime ministers, the Court has refrained from examining the merits of this argument. In his written submissions, Subramanium had suggested that they ought to be granted no greater privilege than that accorded to other citizens of India, except for the minimal courtesies of protocol, pension and other regular post-retirement benefits.

He had submitted that for a republican society to exist, public officials must not be artificially exalted to a superior class at the expense of the citizenry through the conferment of arbitrary privileges upon them by their colleagues. Such exaltation of the ruling elite is a characteristic of authoritarian and totalitarian regimes and antithetical to our republican democracy, he had submitted. Citizens can hold all public officials to account only where all privileges, rights and benefits conferred on them are reasonable, rational and proportionate, he said. A statute which confers public property on private citizens who are no longer serving any public function would undermine trust and confidence in the institutions of the government, he cautioned.

It was brought to the Supreme Court’s notice that at least six states have similar provisions as Uttar Pradesh in extending benefits and facilities to former CMs, some of which have been discontinued, but could be reintroduced in the absence of the Supreme Court’s ruling. Subramanium had referred to a Union cabinet decision in October 2014 to stop the allotment of bungalows as memorials.

Despite the amicus curiae’s note, the bench decided to interpret the validity of the amendments to the Uttar Pradesh legislation alone.

“If the Uttar Pradesh rule goes, what effect will it have on the Central rules or state rules, that is for you (Centre and the States) to see,” the bench told the counsel appearing for the centre and other states. The Court, however, agreed that similar legislation in other states and the rules followed by the centre might come under challenge if the Uttar Pradesh legislation was struck down. The May 7 judgment, however, is silent on this aspect.

Lok Prahari’s success in this case is in contrast with the dismissal of another recent petition by it challenging the grant of life-long pension and travel allowances to former parliamentarians and legislators and their spouses. A Supreme Court bench of Justices J Chelameswar and Sanjay Kishan Kaul had, on April 17, held that these were matters of legislative policy under Parliament’s jurisdiction.