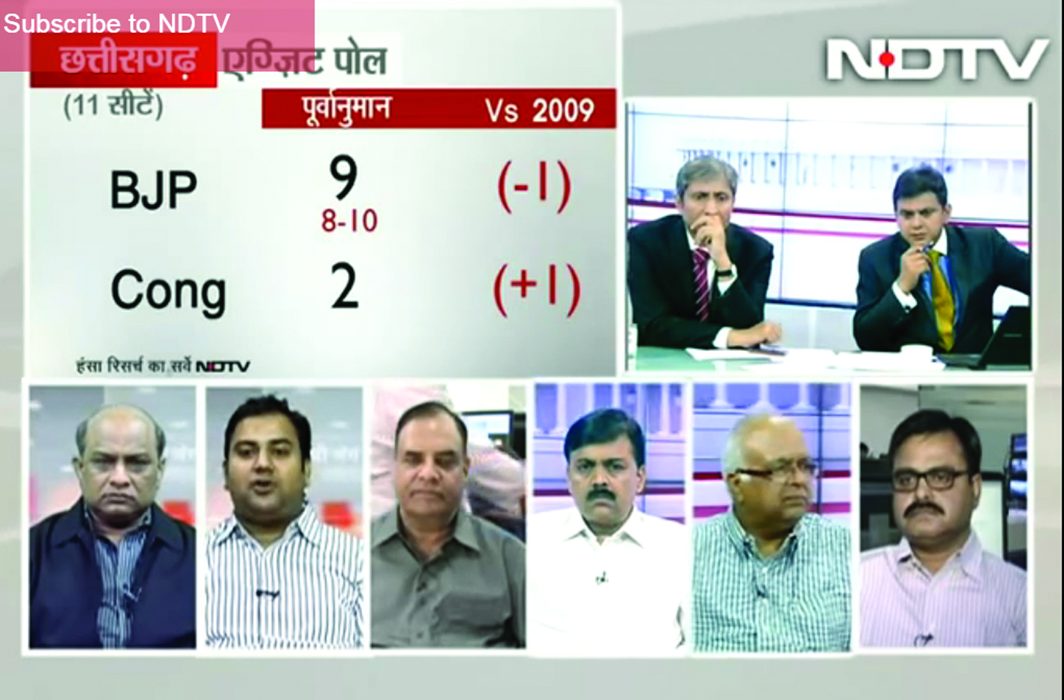 Above: Exit polls of the 2013 Chhattisgarh elections being telecast on NDTV

Can a plea to regulate such polls which impact voter behaviour and which supposedly damage the democratic ideal of free and fair elections have any validity?

The debate over exit polls is unending. Does a voter get influenced by the mood and decision of other voters about whom to vote for in a given election? Even if such an influence is discernible, does it vitiate or facilitate free and fair elections?

Any plea for regulating (as against an outright ban on) opinion and exit polls, however, relies on some supposedly valid grounds. These are that in the ab­sence of such a regulation, the results of an opinion or exit poll could be easily manipulated by those who have little regard for the principles of science and methodology in order to influence the decisions of floating voters. This could tilt the outcome of an election any which way.

This is again an assumption and not proven by facts. Although the bandwagon effect is acknowledged in voting behaviour, its opposite, the underdog effect, has also been found to be true at times. And, a study by the New Delhi-based Centre for the Study of Developing Societies in 1996 showed that only 0.7 percent of voters were influenced by opinion poll forecasts.

Put in this context, the PIL filed by Ashwini Kumar Upadhyay, an advocate, assumes significance. Unregulated exit and opinion polls disseminate false and inaccurate predictions about upcoming elections, which greatly impact voter behaviour, it says. This damages both the freedom to receive information under Article 19(1)(a) of the constitution and the democratic ideal of free and fair elections, Upadhyay says in the petition.

While disposing of a similar challenge earlier, the Supreme Court had held that the Election Commission (EC) is free to frame guidelines to regulate the publication of exit polls. The EC, therefore, held that no result of any opinion or exit poll could be published, publicised or disseminated in any manner by print, electronic or any other media 48 hours prior to voting. The EC also laid down directions that organisations and agencies conducting opinion or exit polls must indicate the sample size of the electorate covered and the geographical spread of the survey. The polls should give details about the methodology followed, percentage of error, professional background and experience of the organisation and key professionals involved in the conduct and analysis of the polls, the EC mandated.

Thus, while there is no ban, the findings of the exit polls cannot be published by the media till the last vote is cast, while opinion poll forecasts cannot be publicised after the campaign period ends, 48 hours prior to voting. Section 126A of the Representation of the People Act, 1951, inserted in 2009, following the recommendation of the EC, prohibits the conduct of exit polls and sharing of their results from the hour fixed for commencement of polls in the first phase till a half-hour after the time fixed for close of poll in the last phase in all the states.

Contravention of Section 126A has been made punishable under Section 126A (3) with imprisonment for a term which may extend to two years, a fine or both. Additionally, Section 126B has been inserted in the RPA for punishment of companies which commit any offence under Section 126A. If the offence is committed by a company, every person who at the time the offence was committed was in charge of and responsible to the company for conduct of business, as well as the company, shall be deemed to be guilty of the offence. However, opinion polls have been kept outside the purview of Sections 126A and 126B.

The Press Council of India (PCI), in its “Guidelines on ‘Pre-Poll’ and ‘Exit-Polls’ Survey” has mandated that opinion polls cannot be conducted 48 hours before the first phase of polling in a multi-phase election. Also, details of methodology, sample size, margin for error and background of the organisation conducting the poll have to be indicated whenever the polls are published.

The National Broadcasting Standards Authority has also issued guidelines which require special care to report opinion polls accurately and fairly by disclosing to viewers who commissioned, conducted and paid for the conduct of these polls and its broadcast. If a news broadcaster carries the results of an opinion poll or other election projection, it must also explain the context, scope and limits of such polls, the guidelines said. Broadcast of opinion polls should be accompanied by information to assist viewers to understand their significance such as the methodology used, the sample size, the margin of error, the fieldwork dates and data used. Finally, the guidelines insist that the broadcasters should disclose how vote shares are converted to seat shares.

According to the petitioner, there have been serious questions about opinion polls. Based on the results of such polls in 2004, it was said that they are prejudiced, fabricated or incorrect in some measure. He also claims that opinion polls distort electoral outcomes, though without making any effort to substantiate it. His plea that opinion polls should be prohibited from the date of election notification till the closing hours of polling, therefore, is debatable.

The petitioner quotes the EC as having said that opinion poll results “would be a deleterious intrusion into the mind of the voter”. He claims holding a lead in an opinion poll generally earns a party an eight to 10 percent lead among undecided voters. If published close to the day of polling, they affect public opinion to a large extent, he says.

The possibility of manipulation of polls by vested interests cannot be a reason for imposing a ban. Just because the findings of such polls shake the confidence of the people, it cannot be a gro­und for endorsing a ban. On the contrary, if people begin to disbelieve the results as they are perceived to be mani­pulated, the polls may not have any undue effect on voters.

The petitioner has argued that the rationale for prohibition is similar for both opinion and exit polls, and therefore, the ban on publishing exit poll results alone till the last phase of voting is completed makes no sense.  The electors must have sufficient time to think independently and exercise their franchise without being influenced by any person or survey, he says. But he does not make it clear why 48 hours before the polling is not sufficient for this purpose and why in terms of their impact, opinion and exit polls cannot be viewed differently.

After the Supreme Court expressed its doubt about the enforceability of the EC’s guidelines on opinion and exit polls, the Commission withdrew its guidelines, and recommended to the government to fill the void in the law.  The government did so in 2009 with regard to exit polls, but allowed the ambiguity with regard to opinion polls to continue. The EC, therefore, uses the existing legal restrictions on publicising any election-related material during the 48 hours before the polling concludes, to ban dissemination of opinion poll results by the media.

Although the EC and some political parties are in favour of a ban on disseminating opinion poll results after the date of notification of elections, experience has shown that such polls have only contributed to lively debates prior to elections. Merely because opinion polls distort the accuracy of information, and thus have a tendency to “heavily influence” electors’ choices in a manner that is contrary to the spirit of free and fair elections, as the petitioner claims, it cannot be a ground for prohibition and further regulation of such polls.

A similar argument can be advanced for restricting publication of inaccurate information in any manner in the print and electronic media, which would be against the spirit of freedom of expression guaranteed by the constitution. Just because information available in the public domain turns out to be inaccurate, it cannot justify restrictions on its dissemination beforehand.

It remains to be seen if the petition finds favour with the Supreme Court.