Above: (L-R) BJP leader Ashwini Upadhyay, advocate Prashant Bhushan and former navy chief Admiral L Ramdas are among those who have been chastised by the SC for filing frivolous PILs

The Supreme Court made its position clear on the issue of filing of frivolous public interest litigations (PILs). In an unprecedented move, the Court warned Ashwini Upadhyay, a BJP leader, of facing a ban on filing PILs in future. Upadhyay, who has been behind many focal changes in law, has also raised unreasonable issues before the apex court, and consequently, wasted its time.

Recently, the CJI-led bench dismissed Upadhyay’s petition seeking a direction to the centre to impose an upper limit of Rs 2,000 per person per year on political donations in cash. The bench mentioned how PILs are a boon to society and the person filing them should exercise responsibility and caution while bringing them to court.

He had also prayed that tax exemption under Section 13A of the Income Tax Act, 1961, be granted only to those parties which contest and win parliamentary or state assembly elections. Section 13A of the Act exempts political parties from paying any tax on donations received by them. The CJI, while observing that these issues are better suited for Parliament, said: “With all sense of responsibility, why should we get into it? Is it our domain? Just look at your prayers!”

Senior advocate Sajan Poovayya, appearing on behalf of the petitioner, also agreed that the prayers were not drafted properly.

Upadhyay has filed innumerable PILs in the Supreme Court—some have been concluded, some dismissed and some are still pending. PILs are an exception to the principle that only an aggrieved person can file a suit; they are based on the notion that anyone can approach the court if there is public interest involved. But, this process should be used with great caution.

Such frivolous PILs are looked down upon not only by judges, but advocates as well. Mukul Rohatgi, when he was the attorney general, had argued that PILs filed by Yogendra Yadav and advocate Prashant Bhushan seeking relief for drought-affected regions must not be entertained as their organisation, Swaraj Abhiyan, went from being a non-profit to a political organisation. The argument against these PILs was that people try to fulfil their political agenda in the name of “public interest”.

The inception of PILs gave a new impetus to the idea of India as a “welfare state” under the Constitution. Keeping in mind the welfare and general interest of the people, the Court allows the pedantic nature of procedural law to be relaxed. It has happened many a time that the Court has addressed issues brought to its notice by letters and telegrams. The effect of such PILs has been huge such as the famous case of Hussainara Khatoon v State of Bihar, which led to the release of many undertrials who had spent the maximum sentence prescribed for their offence even though their trial had not started.

The concept of PILs is also prevalent in the West where they are known as “class action suits”. This means that there is no individual complainant, but a class or section which has a common grievance. Class action judges carry out very serious examination to determine whether a suit qualifies as a “class action suit”. In India also, PILs ought to be given sanctity only if they truly represent a “class action suit” such as the Bhopal Gas tragedy case where victims were not given due compensation.

However, the usefulness of PILs becomes questionable when they are misused. Upadhyay certainly isn’t the only one who has many PILs to his name. Earlier this year, the Supreme Court criticised the role of Prashant Bhushan while dismissing several PILs which sought an investigation into the death of special CBI court judge BH Loya way back in 2014. The apex court said: “Attempts were made to misrepresent and mislead the Court by manufacturing evidence to cast a doubt on the circumstances leading to the death of judge Loya.” Justice DY Chandrachud, who authored the judgment, said: “Prashant Bhushan adopted a dual mantle and went to the length of personally collecting evidence to bolster the case.” He added: “The petition is a veiled attempt to launch a frontal attack on the independence of the judiciary and to dilute the credibility of judicial institutions.” It criticised the intervention of Bhushan’s NGO, Centre for Public Interest Litigation (CPIL) in this case.

Last year, Prashant Bhushan, representing the Campaign for Judicial Accountability and Reforms, had demanded the recusal of CJI Dipak Misra from the bench hearing the plea seeking an SIT probe, saying there were allegations against him in the FIR. A three-judge bench of Justices RK Agrawal, Arun Mishra and AM Khanwilkar censured Bhushan and Kamini Jaiswal for “forum shopping” because even while the first PIL was pending before a two-judge bench, they got a second petition, based on similar facts and with identical prayers, listed before the bench of Justice Chelameswar on an urgent basis. “The senior counsels attempted forum shopping to seek a favourable order and it was unethical of them to do so. They did not verify the position of law and unnecessary doubt was raised on this institution. Proper verification of facts was not made before filing this petition,” the order said.

In 2016, Bhushan received the most stinging rebuke from a three-judge bench of Chief Justice TS Thakur and Justices AK Sikri and R Banumathi when they raised questions about CPIL while hearing a petition challenging the 4G spectrum auction to Reliance Industries Ltd’s Jio. “Prashant Bhushan, you have an image of a crusader. But can you become the centre for public interest litigation? Can the system be taken for a ride in such a manner? We cannot allow this,” they said.

In another case, Justice Ranjan Gogoi (as he then was), had dismissed a PIL filed by former navy chief Admiral L Ramdas, saying: “PILs are for the poor and those who cannot afford to approach the court.” Admiral Ramdas had filed a PIL against the appointment of IPS officer Sharad Kumar as the vigilance commissioner in the Central Vigilance Commission. Bhushan, who had argued for the petitioner, contended that PILs can be filed by anybody in “public interest”. Both the argument and the petition were dismissed by the Court.

Upadhyay’s latest petition that was dismissed is one of several petitions filed by him on election matters. CJI Gogoi, sounding irritated, said: “Just because we have heard some matters of this gentleman, three PILs are filed everyday and all regarding elections! Three PILs are coming tomorrow and one was mentioned today!” Observing the callous nature of the petitioner, the Court warned his counsel that such behaviour will not be tolerated. Agreeing with the CJI, Justice Sanjay Kishan Kaul suggested: “We should ban certain people from filing PILs…if some (petitions) are allowed, one cannot be filed every day. If it does not make any sense, we will not decipher it…caution your client, one more improper petition and we will ban him.” 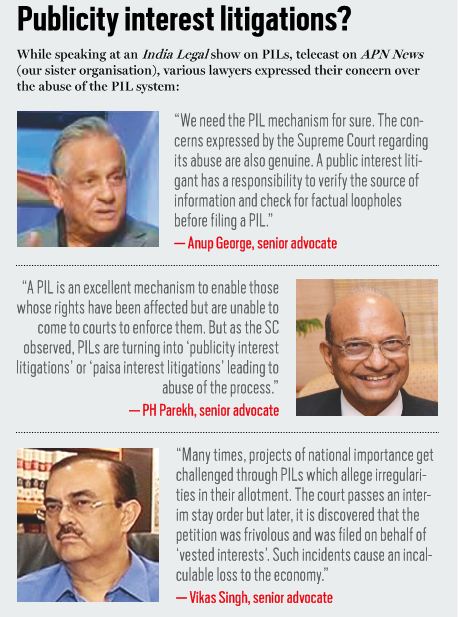 In October 2018, the CJI-led bench imposed a fine of Rs 25,000 on a lawyer for filing a PIL which prayed for lowering the marriageable age for men from 21 years to 18 years. The lawyer, Ashok Pande, contended that if an 18-year-old man has a right to vote and join the army, there was no rationale in restricting his right to marry until he has attained the age of 21. The bench concluded that the petitioner had no locus standi in this case and ultimately dismissed the PIL.

The new CJI has been taking stern action to reduce the pendency of cases. On the first day of assuming office, he made it clear that PILs challenging every decision and action of the government will not be entertained. The same day, he rejected Bhushan’s plea to list a PIL relating to the deportation of seven Rohingya Muslims, and a PIL filed by Upadhyay which demanded curtailing of time for filing an account of election expenses. He said: “Courts cannot monitor everything in the country.” Furthermore, the CJI has held six meetings over future appointments in the short time that he has been CJI. As a consequence, four new judges have been elevated to the apex court within 48 hours of their names being recommended.

There is no doubt that PILs are an advantage to the public, but when they are misused by people to further their own agendas or mislead the court, they consume the valuable time of the judiciary and infringe on the relief that could be granted to other people instead. It is the duty of the judiciary to interpret laws, but it cannot function as the law maker. Most PILs get rejected as it is the government’s duty to be the policy maker, not the judiciary’s.

Extensive filing of PILs has diminished its purpose in the advocacy and justice system. It is the responsibility of the Bar to respect the essence of PILs and refrain from filing frivolous ones. The position of PILs in our judicial system is irreplaceable, but this mechanism should not be abused, otherwise it will lose its importance and everything it stands for. To prevent abuse, PILs should be checked for credibility and verifiability based on some standards set by the courts.