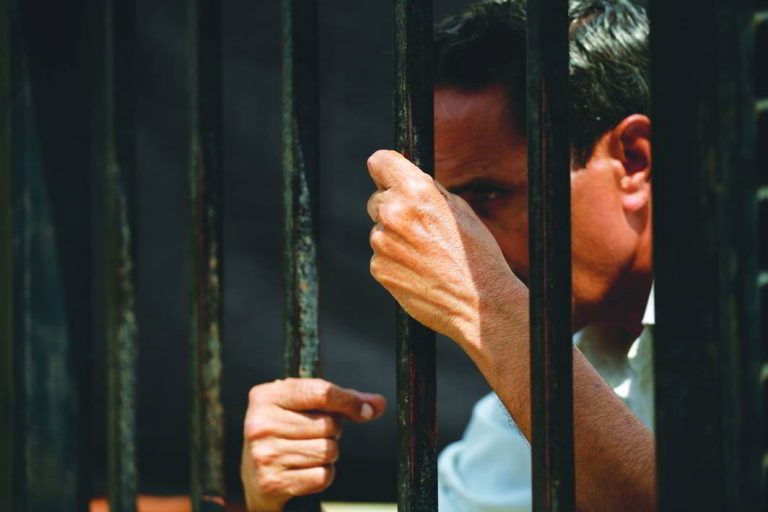 Above: The philosophy of India’s criminal justice system is based on reform, but in practice, it’s deterrence that gets precedence. Representative Image: Anil Shakya

In a landmark judgment, the apex court has issued a slew of directions to improve living conditions in prisons

On September 15, a Supreme Court bench of Justices Madan B Lokur and Deepak Gupta gave a momentous judgment to improve the living conditions in prisons. It issued a slew of directions to the centre and states in defence of prisoners’ rights.

First, it requested the chief justice of each high court to register a suo motu public interest petition with a view to identify the next of kin of prisoners who had died an unnatural death since 2012, and award suitable compensation, in case adequate compensation has not already been awarded.

Secondly, the Court directed the states to appoint counsellors and support persons, particularly for first-time offenders and involving the services of recognised NGOs. This is because there is a realisation that first-time offenders are more likely to find it difficult to adjust with prison conditions and may think of harming themselves out of desperation.

The Court also proposed to extend the time or frequency of meetings between prisoners and their family members and lawyers by encouraging the use of phones and video-conferencing.

More significantly, the Court directed state governments to include eminent members of civil society in the Board of Visitors, who could initiate prison reforms, including rehabilitation of prisoners. The Court also asked the authorities to study and emulate the system of open prisons which has been successfully experimented in Shimla and Delhi.

While these steps have the potential to reduce the number of unnatural deaths in prisons, official data on which is still unclear, their significance for the future of prison administration is enormous.

The Supreme Court first took notice of the case in 2013 when former Chief Justice of India RC Lahoti wrote a letter to his successor, bringing to his attention the incidence of unnatural deaths in prisons. He also stressed the need to improve living conditions in jails so that prisoners could live a life of dignity.

Chief Justice Lahoti’s letter was subsequently treated as a public interest litigation, and notices were issued to all states and Union Territories to submit written responses on the condition of prisons. The Supreme Court warned that it might be compelled to summon chief secretaries/ chief administrators of those states and Union Territories which did not file their responses on the issue.

On March 13, 2015, the Social Justice Bench of Justices Madan B Lokur and UU Lalit began to hear the case. The bench was shocked to find that the living conditions in prisons were miserable despite a grant of Rs 609 crore under the 13th Finance Commission for their improvement. The bench asked the centre to explain how this grant was utilised and how much of it was given to states under the 14th Finance Commission.

As the prisoner population in the country mostly comprises undertrials, the Court wanted to know how many of them were languishing in prisons mainly on account of their inability to provide adequate surety for bail, and how many had committed compoundable offences.

The bench made it clear that it was not necessary or compulsory that an undertrial must remain in custody for at least half the period of his maximum sentence only because the trial had not been completed in time.

While doing so, the bench showed its concern for the children of women prisoners, and directed the home ministry to amend the Model Prison Manual to provide for a crèche for them. The bench found to its dismay that many undertrials were granted bail, but were unable to furnish the bail bond, thus leading to more overcrowding in prisons and affecting their psychological condition. In Maharashtra alone, the bench was told, there were 797 undertrials who were entitled to bail and 503 of them were indeed released with the efforts of the State Legal Services Authority. 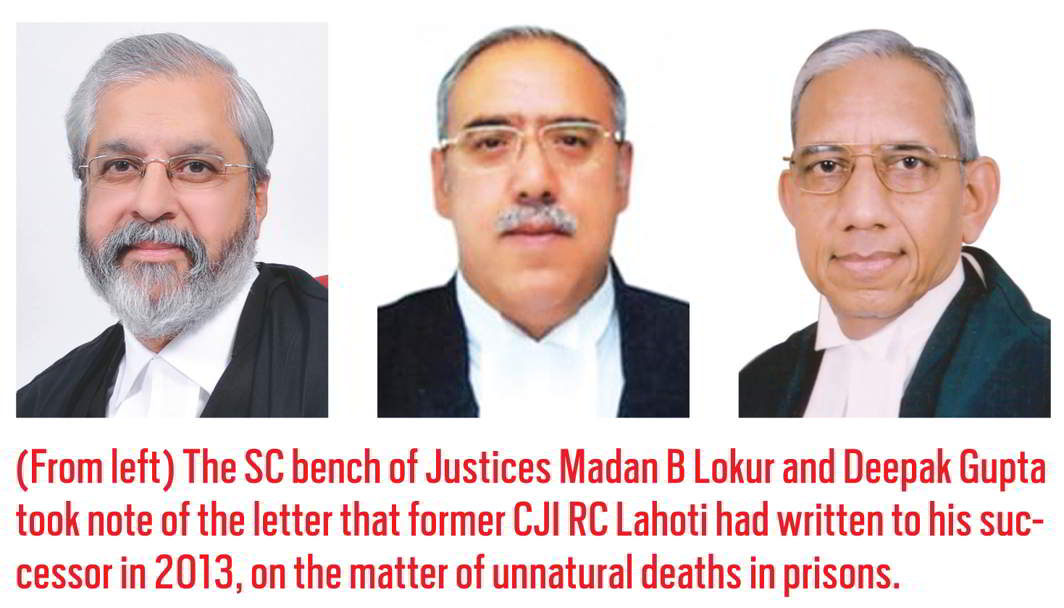 It is at this point that the bench appointed Gaurav Agrawal, a young and dynamic advocate, as amicus curiae in the case, to assist the Court.

The bench came to know from him that there were several jails where over-crowding was more than 150 percent. An excessive prison population, needless to say, has its own problems of hygiene, sanitation, management, discipline, and the like.

The Supreme Court continued to emphasise in many of its rulings that a person, while in custody, should not be stripped of his fundamental right under Article 21 of the constitution. The restrictions imposed on a prisoner have the sanction of law by which his enjoyment of fundamental rights is curtailed, but his basic human rights should not be crippled by the police treating him in an inhuman manner.

The Court, in the meantime, also began to monitor unnatural deaths of prisoners while in custody, gross inadequacy of prison staff and their inadequate training. The bench came to know that the average suicide rate in prisons is over 50 percent more than the number reported among the non-prison population.

Agrawal told the Court that merely because a person is in prison, it does not mean that he should be cut off from the outside world. If a prisoner is allowed to maintain contact with the outside world, it would substantially reduce the feeling of isolation and reduce the possibility of any harmful activity, the Court was told.

On September 15, Justices Lokur and Deepak Gupta in their judgment emphasised that the central government, despite constitutional limitations imposed by prisons being a state subject, should share its expertise and give guidance to the state governments.

The Supreme Court has emphasised in many of its rulings that a person, while in custody, should not be stripped of his fundamental right under Article 21.

Attorney General KK Venugopal expressed a bizarre view during the hearings that state governments have other development priorities, which require greater attention than prison reforms. The bench made it clear to him that Article 21, which applies equally to prisoners, cannot be put on the back-burner and as mentioned in the Nelson Mandela Rules, even prisoners are entitled to live a life of dignity.

The UN General Assembly adopted the Standard Minimum Rules for providing internationally accepted guidelines for implementation by prison administrators. They are called Nelson Mandela Rules in honour of Nelson Mandela, the late South African president, who spent most of his life in prison during the apartheid regime. Although these rules are not binding on nation states, the recognition given to them by the Indian Supreme Court is significant and accords them legal sanctity.

The Court made it clear that no state government can shirk its responsibilities for providing better facilities to prisoners, and if a state is unable to do so, it should be far more circumspect in arresting and detaining persons, particularly undertrials who constitute the vast majority of those in judicial custody.

State governments and the prosecution do not have to oppose every bail application, nor do they have to ask for the remand of every suspect pending investigation, the bench said. More importantly, it reminded the governments that prisoners cannot be treated as chattel.

More shocking is a finding by the Comptroller and Auditor General of India that the hospital in Tihar Jail, Delhi, was ill-equipped to handle any emergency as there was a shortage of doctors and other medical staff ranging from 18 percent to 62 percent. The Court also noted with concern another finding—that essential medicines were not available for a period ranging from one to 34 months.

The Supreme Court in its judgment also reflected on the larger question of what leads to violence in prisons and unnatural deaths. The Court reasoned that the philosophy of our criminal justice system is based on reformation and rehabilitation of prisoners, but in practice, it is the theory of retribution and deterrence which gets precedence. The prohibition of handcuffing and solitary confinement are instances of our emphasis on reformation, but similar adherence to this theory is missing in other aspects of prison administration, the Court observed.

As the Court continues to monitor the implementation of its directions without disposing it, one hopes to see further progress in ensuring the dignity of prisoners.