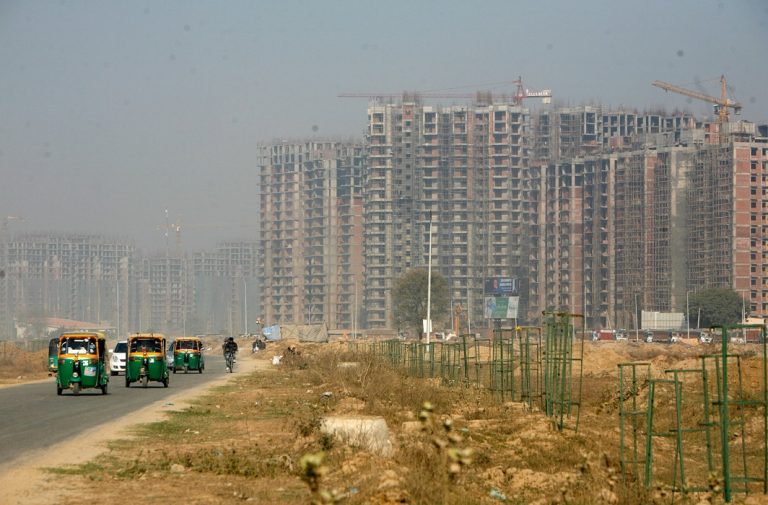 Above: Homebuyers must check out the credentials of the builder before investing their money/Photo: Anil Shakya

In a relief for homebuyers, the apex court has made it mandatory for developers to display the sanction plan of the project at the proposed site. This will weed out fly-by-night operators

Shilpi Rawat was just 25 when she put all her savings and those of her father, a retired government employee, in an Earth Towne flat in Sector 1, Greater Noida. She was thrilled to see the glossy brochure showing an artist’s impression of a lush-green and posh colony. Rawat was supposed to get possession of her flat in May 2015.

However, little did she know that her ordeal with the developer, Earth Infrastructures Ltd., had just started. The salesperson convinced her to opt for a payment plan where she would immediately have to pay 95 percent of the total cost of the flat. That was six and a half years ago. Today, there is no sign of any flat at the site. A guard, who was stationed there, has disappeared, the sales executive who briefed her has quit, the company’s phones are dead and the builders are in jail.

Rawat has attended numerous court hearings in Tis Hazari in Delhi along with others who had paid for the flats. But they have only seen the proceedings get adjourned time and again. The builder has refused the court’s suggestion to pay a corpus to it. Rawat told India Legal: “I have no hope left. I am planning to get married soon and need that house. The hearings leave me exasperated. This is precisely what the developers want so that they can make a quiet escape.”

During the court hearings, Rawat learnt that the builder had actually sold off more flats than envisaged as the same flat was sold off to multiple buyers. This made her realise that the developer never intended to construct those flats. Most of the buyers the buil­der had targeted were retired. They had a lump sum amount after retirement and were mostly from Tier-II and Tier-III cities and wanted to shift to the National Capital Region.

There are millions of middle class buyers like Rawat who have been duped by builders and developers. There was Raj Narain, in his late eighties, who could not even stand and had come all the way by metro for the court hearing. Rawat booked a cab for him to go back, but he pleaded with her not to as he did not have the money to pay for it. He told her that he had put his entire retirement fund in the flat. In the course of the six-year wait, he lost his wife too. He has now rented a part of his Faridabad house with a request to the tenant to provide him two meals a day. “Old and helpless people like him are completely at the mercy of the developer, the court and associations formed to fight the cases. Many have died waiting for justice,” said Rawat.

However, the Supreme Court has given them a ray of hope. A bench of Justices Kurian Joseph and Sanjay Kishan Kaul recently made it mandatory for builders and developers to display the sanction plan of projects at the site. They said that homebuyers have a right to know details of the houses they have invested in and when they will be delivered.

After the apex court sent the group’s directors to police custody, documents and accounts of its 46 companies are suddenly available for forensic examination

Though the Supreme Court had repeatedly asked the Amrapali Group to present details of its properties and accounts since September last year, it did not do so. Sending shock waves among defaulting real estate companies, the Court sent the Amrapali CMD, Anil Kumar Sharma, and two directors, Shiv Priya and Ajay Kumar, to police custody. They were to be detained till papers of its 46 group companies were handed over to the Court, which wanted the papers for forensic audit to determine the validity of complaints of cheating and diversion of funds.

A bench of Justices Arun Mishra and Uday Umesh Lalit that sent them to custody did not mince words: “Don’t play hide and seek with the court. You are playing with the dignity of the Supreme Court.” The bench had been asking for these details since September 12.

The homebuyers had approached the top court last year, pleading that their flats be given to them after 27 of the Amrapali housing projects in the National Capital Region were affected after banks initiated insolvency proceedings against the group. As many as 42,000 buyers were suffering for many years due to non-delivery of flats. Among them, 170 towers were in Noida and Greater Noida alone.

After a long, dark night in the police station lock-up, details of all the 46 companies of the Group came tumbling out. The Court wanted accounting data of all transactions since 2015 so that the Court-appointed auditors could scrutinise it. A forensic audit will evaluate and examine the financial information available and present it as evidence in Court. It now has been revealed that Amrapali did not audit accounts since 2015.

Nine properties of the Group were sealed and the three directors will continue in custody as all the required documents have not been given to the Court. The sealed properties are out of bounds for everyone except the auditors. The bench has warned the directors of serious action in case the auditors find any documents missing. The directors would be back in police custody if every single document had not been turned over, it warned. It also asked the directors to give an undertaking that all documents pertaining to the 46 companies had been handed over. The Court has restrained eight Amrapali directors and even ex-directors from leaving the country, ordering their passports be deposited with the police.

Last year, the Court had warned the Amrapali Group, its promoters and directors of severe consequences if it failed to raise Rs 5,000 crore to complete its half-done housing projects. It warned that it would order the sale of all properties of the Group, including their individual homes, as buyers had been short-changed and cheated.

Despite this stand of the Court, Amrapali builders did not act. In August last year, the Court told the builders, “You are in the hands of the Court now and you have to act cautiously and uprightly. Don’t play smart with us. We will sell every inch of your property and render you homeless.” The homebuyers had waited for years and the Court would go to any lengths to protect their interests, it said. It is now clear to Amrapali and other real-estate players that the Court means business. For home­buyers that is the only silver lining.

Arvind Jain, president, Developers Township Property Owners Welfare Society, told India Legal: “The judgment must be widely publicised and all resident welfare associations should display it on their websites so that people know that there is such a direction and can challenge errant builders.”

The bench said that due to rampant violations and its consequences, display of layout plans is a must and should be enforced by the Real Estate Regulatory Authority (RERA). This direction came up in a case filed by Ferani Hotels Pvt. Ltd., which challenged a High Court order asking for the release of certain documents relating to a development plan of a plot in Mumbai to Nusli Wadia under the Right to Information Act.

Wadia had entered into an agreement with Ferani Hotels for carrying out development work in 1995 on three plots of land. But disputes between the parties in 2008 resulted in Wadia terminating the agreement. He asked for certified copies of all PR cards, plans and amendments submitted by Ferani Ho­tels to the municipal commissioner along with his approvals. The State Information Commission allowed the application, reasoning that the development of the property concerned public interest.

Aggrieved by this order, Ferani Hotels filed a writ petition in the Bombay High Court which dismissed it. The Court held that the information sought in the application was part of public records and had to be revealed in public interest. The appellant then approached the Supreme Court.

The apex court said that in order to make builders and developers accountable to the public, the documents need to be put in the public domain and do not constitute “personal information”. It found that the information sought did not fall under the ambit of trade secrets or commercial confidence and were required under RERA. It dismissed the appeal and asked Ferani Hotels to pay Rs 2.50 lakh to Wadia as costs.

As Diwali is round the corner, developers and real estate companies are coming out with tempting offers to homebuyers. Many are offering huge discounts running into lakhs of rupees. The real estate market is reeling with poor sales as public confidence has plummeted with many housing scams.

It is best for customers to be careful and check out the credentials of the builder or developer. They should invest in a property that has been completed rather than one where construction has not even begun. Noida and Gurgaon are full of half-complete high-rises that stand like sentinels without a single worker.

These are grim reminders of the deplorable state of real estate today.