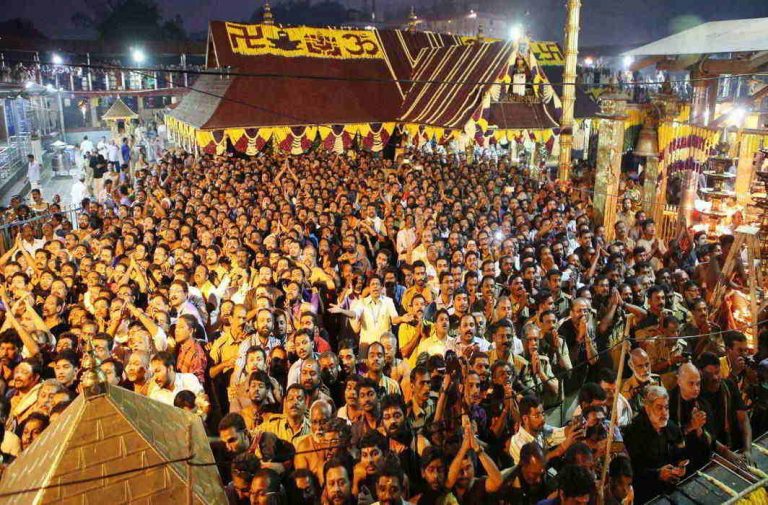 The Supreme Court on Wednesday reserved its verdict on Sabarimala review pleas after a five-judge bench heard the matter for over four hours  on a day that also saw the Devaswom Board that manages the Ayyappa temple do a U-turn on tnhe entry of women  and now saying that women of all age groups should be allowed to pray there. At the end of the day’s hearings, the court said it would pronounce its order as to whether to review the judgment or not.

Earlier today, the  constitution bench headed by Chief Justice Ranjan Gogoi started hearing a batch of 65 review petitions and 4 writ petitions opposing the entry of women into the temple as allowed by the apex court in its September 28 landmark judgement. Then, a a five-judge bench led by ex Chief Justice of India Dipak Mishra passed the order which has led to violence in large parts of Kerala as pro and anti womens entry repeatedklty clashed.. The proceedings started with the Chief Justice asking the senior advocates to confine their arguments to the grounds in the review petitions. In the course of two hours, around 10 advocates, appearing for various petitioners, presented their arguments before the Supreme Court.

The first to present the case was senior advocate K Parasaran, who was appearing for the Nair Service Society. Speaking for more than 20 minutes, he submitted that the Constitution bench had failed to deal with the interplay of the Constitution’s Preamble and Articles 15, 17 and 25 of Constitution. Parasaran highlighted that Article 15 (prohibition of discrimination), which threw open all public institutions of secular character to all classes of person, conspicuously omitted religious institutions and therefore it was an error to strike down a temple custom under Article 15.

He also asserted that the Supreme Court’s September judgment did not consider the crucial aspect that Article 15 (2) does not cover religious places. The omission to consider this aspect constitutes an error apparent on record, the counsel submitted.

He argued that the practice was limited to a particular age group, and therefore cannot be equated with untouchability — which excluded an entire class of people. Parasaran concluded saying that the exclusionary practise in Sabarimala is based on the character of the deity, which is that of Naishtika Brahmachari or permanent celibate.

Appearing for the chief priest or Thantri of the Sabarimala temple, senior advocate V Giri reitrated that right to pray has been in consonance with the nature and form of the deity. He argued that the restriction in Sabarimala had been based on the character of the deity. Advocate VV Giri argued that any person who asserts right under article 25(2)(b) to worship has to do it in consonance with the nature of deity.

The Kerala government’s counsel also opposed arguments put forward by various petitioners that it was a private issue. “It is about public law issue unless they argue that women between age 10 to 50 are not a class of Hindus,” Jaideep Gupta said. He also told the bench that it should not consider the tension and violence that followed the judgment. “That social peace has been destroyed is not a ground for reviewing the judgment. Constitutional invalidity cannot be permitted to go on,” he argued.

On September 28, the Supreme Court in a 4:1 majority ruling lifted the ban on the entry of women between the ages 10 to 50 into the Sabarimala temple in Kerala.