Rhea Chakraborty bail: Supreme Court says Centre can challenge order, not observations made by Bombay HC in it 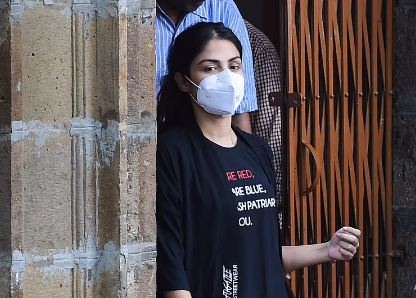 The Supreme Court on Thursday told the Centre that the findings of bail proceedings of actor Rhea Chakraborty in Bombay High Court cannot be challenged just over observations made in it.

The three-judge bench headed by Chief Justice S.A. Bobde and Justices A.S. Bopanna and V Ramasubramanian was hearing the plea when CJI Bobde observed prima facie that while the bail order can be challenged, the findings in it cannot be challenged. The bench told Solicitor General Tushar Mehta, appearing for the Centre, that it found some things very difficult to understand. Mehta had said the observations by the Bombay High Court judge had made the Narcotic Drugs and Psychotropic Substances “unworkable”.

Mehta added that they will amend the petition and include a challenge against the grant of bail. The court deferred the next hearing to March 22, Monday.

Rhea Chakraborty had got bail on October 7 last year upon furnishing a bond of Rs 1 lakh. She had spent 28 days in custody. Chakraborty’s counsel had contended that the NCB lacked jurisdiction to probe the matter in view of the Supreme Court order of August 19 directing to hand over all investigations in the Sushant case to the CBI, the offences under which the accused were nabbed by the NCB were bailable and the charges under the NDPS Act section 217A against the accused did not have supporting evidence.