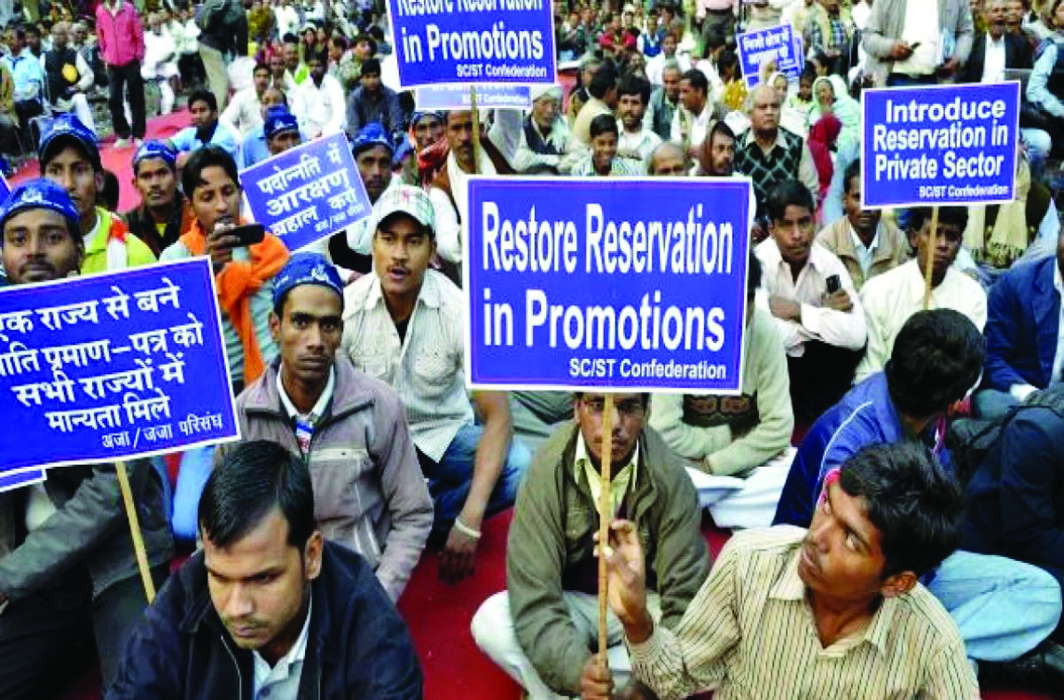 The Constitution Bench headed by Chief Justice Dipak Misra ruled that there was no need to collect quantifiable data on the backwardness of the Scheduled Castes and Scheduled Tribes population in respective States so as to provide them reservation in job promotions. The court termed the Nagaraj verdict and the guidelines laid out in it for reservations as being contrary to the Supreme Court’s historic judgment in the Indra Sawhney case.

The Constitution Bench which also comprised of Justices Kurian Joseph, Rohinton Fali Nariman, Sanjay Kishan Kaul and Indu Malhotra held that: “we conclude that the judgment in Nagaraj does not need to be referred to a seven–Judge Bench. However, the conclusion in Nagaraj that the State has to collect quantifiable data showing backwardness of the Scheduled Castes and the Scheduled Tribes, being contrary to the nine-Judge Bench in Indra Sawhney is held to be invalid to this extent.”

Stating that the question for consideration before the Constitution Bench was whether the Nagaraj judgment needs to be revisited, the verdict, authored by Justice Nariman, states: “It is clear that Nagaraj has, in unmistakable terms, stated that the State has to collect quantifiable data showing backwardness of the Scheduled Castes and the Scheduled Tribes. We are afraid that this portion of the judgment is directly contrary to the nine-Judge Bench in Indra Sawhney.”

The bench placed reliance on the top court’s earlier verdict in the Chinnaiah case and said that the verdict in Chinnaiah “referred to the Scheduled Castes as being the most backward among the backward classes. This is for the reason that the Presidential List contains only those castes or groups or parts thereof, which have been regarded as untouchables. Similarly, the Presidential List of Scheduled Tribes only refers to those tribes in remote backward areas who are socially extremely backward.” Based on this premise, Justice Nariman concluded that “it is clear that when Nagaraj requires the States to collect quantifiable data on backwardness, insofar as Scheduled Castes and Scheduled Tribes are concerned, this would clearly be contrary to the Indra Sawhney (verdict) and would have to be declared to be bad on this ground.”

Noting that “the whole object of reservation is to see that backward classes of citizens move forward so that they may march hand in hand with other citizens of India on an equal basis,” the Bench ruled that “this will not be possible if only the creamy layer within that class bag all the coveted jobs in the public sector and perpetuate themselves, leaving the rest of the class as backward as they always were.”

Justice Nariman said in the verdict that “when a Court applies the creamy layer principle to Scheduled Castes and Scheduled Tribes, it does not in any manner tinker with the Presidential List under Articles 341 or 342 of the Constitution of India. The caste or group or sub-group named in the said List continues exactly as before. It is only those persons within that group or sub-group, who have come out of untouchability or backwardness by virtue of belonging to the creamy layer, who are excluded from the benefit of reservation. Even these persons who are contained within the group or sub-group in the Presidential Lists continue to be within those Lists. It is only when it comes to the application of the reservation principle under Articles 14 and 16 that the creamy layer within that sub-group is not given the benefit of such reservation.”

Stating that the part of the Nagaraj verdict that dealt with reservation or denial of it for the “creamy layer” with the SC/ST communities “did not in any manner interfere with Parliament’s power under Article 341 or Article 342” and, therefore, “does not need to be revisited and consequently, there is no need to refer it to a seven-Judge Bench” for further consideration.

THE FULL TEXT OF THE 58-PAGE VERDICT BY THE CONSTITUTION BENCH CAN BE ACCESSED THROUGH THE FOLLOWING LINK: