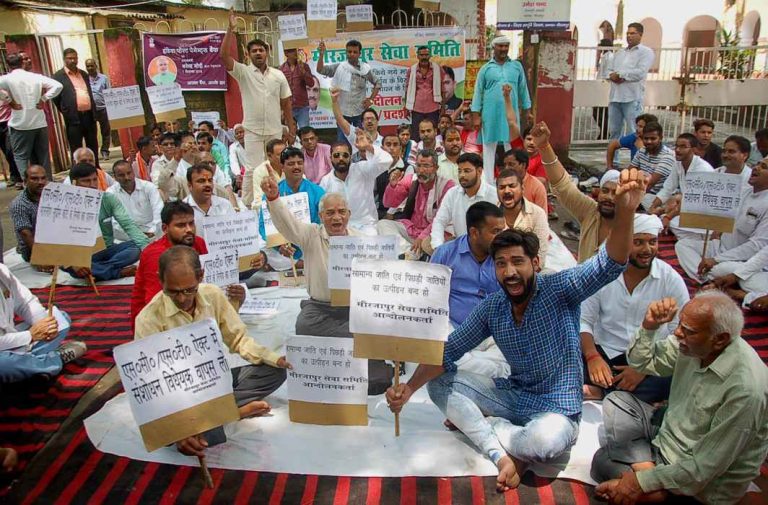 Above: People from upper castes protesting against the amendments made to the SC/ST Act/Photo: UNI

The Supreme Court is hearing a review petition by the centre against its own judgment in 2018. Will it defer to the centre’s wisdom in amending the Act in order to mitigate the upheaval caused by last year’s judgment?

A three-judge Supreme Court bench comprising Justices Arun Mishra, MR Shah and Bhushan Gavai will, from next week, start hearing the centre’s review petition against its judgment diluting provisions of the SC/ST (Prevention of Atrocities) Act, 1989.  The composition of the bench was significant: it excluded Justice UU Lalit who was on the original bench (along with Justice AK Goel).

Justice Lalit, though, was part of the two-judge bench led by Justice Mishra which referred the case to be heard by a three-judge bench on September 13 “considering the importance of the matter”. It is unusual that a judge who had heard a case is excluded from further hearing of it unless he wants to recuse himself from it.

On March 20, 2018, the Goel-Lalit bench held that when information is received about an offence committed under the SC/ST (PoA) Act, a preliminary inquiry might first be conducted before registering an FIR. The bench also held that a public servant can be arrested under the Act only after the approval of the appointing authority and that of a non-public servant after the approval of a senior superintendent of police (SSP). It said that any violation of these directions would be liable to be dealt with by disciplinary action and contempt of court.

In its review petition, the centre contended that the March 20, 2018, judgment had the potential to reduce the deterrent impact of the Act and therefore, would expose these communities to increased vulnerability. It also submitted that the judgment was a clear case of “judicial amendment” to the SC/ST (PoA) Act, and that it affected the morale and confidence of the people belonging to these communities.

Following the Supreme Court’s refusal to stay the judgment, Parliament passed the Amendment Act in August 2018 to rule out anticipatory bail and preliminary inquiries in cases registered under the Act. This was following uproar against the judgment by SCs and STs and resulting in as many as nine deaths. Any dilution of the Act was interpreted as a dilution of the commitment to social advancement of SCs and STs.

The case decided by the Goel-Lalit bench was Dr. Subhash Kashinath Mahajan v State of Maharashtra. The question that was framed in the appeal was “whether any unilateral allegation of mala fide can be ground to prosecute officers who dealt with the matter in official capacity and if such allegation is falsely made what is protection available against such abuse”.

The appeal in the Supreme Court was against an order passed by Bombay High Court on May 5, 2017, which refused to quash the FIR lodged against appellant Dr Subhash Kashinath Mahajan for offences under the SC/ST (PoA) Act.

The Act is generally criticised because several offences under it depend on the version of the complainant without any verification or tangible proof. This is contrasted with Section 41(1) (b) of the Code of Criminal Procedure (CrPC) which states that arrest can only be effected if there is credible information and if the police officer has reason to believe that the offence was committed and such an arrest was necessary.

Thus, Mahajan’s counsel argued that the power of arrest should be exercised only after complying with the safeguards provided under Sections 41 and 41A of the CrPC.

However, those defending the 1989 Act contend it was enacted in accordance with Article 46 of the Constitution. This enables the State to promote the educational and economic interests of the weaker sections of society, in particular SCs and STs, and to protect them from social injustice and all forms of exploitation. The Act was amended in 2015 to make it even more stringent. These offences include preventing SCs/STs from using common property resources, entering any place of worship open to the public, entering an educational or health institution, etc. The onus to prove that the accused was not aware of the caste identity of the victim is on the accused.

As this was not an issue in the Mahajan case, the new stipulations laid down by the Goel-Lalit bench made one wonder whether they were meant to get over the justification for excluding anticipatory bail in the Balothia case.

In 2007, Bhaskar Gaikwad, a storekeeper in a government college in Karad, Maharashtra, complained against the college principal, Satish Bhise. Gaikwad belonged to the SC.

In 2008, Gaikwad stated in his annual confidential report (ACR) that there are certain irregularities in the procurement of materials for the college. This provoked his superior, Kishor Burade, and Bhise (neither from the SC/ST) to make derogatory comments against Gaikwad in the ACR.

This provoked Gaikwad to file an FIR against both under the Act’s provision. Both Bhise and Burade were gazetted officers and could not be prosecuted without sanction. Subhash Mahajan, who was the director-in-charge, Technical Education, Maharashtra, denied sanction for prosecution. The police quietly closed the case. In 2016, Gaikwad filed a fresh FIR against Mahajan. His offence: knowingly shielding persons accused of committing offences under the Act. In August 2016, the Bombay High Court refused to quash the case against Mahajan, saying there are sufficient safeguards in the Act to guarantee protection against frivolous and false prosecution.

It was against this decision of the High Court that Mahajan filed an appeal in the Supreme Court. The Goel-Lalit bench expanded the scope of Mahajan’s appeal, laying down guidelines which led to outrage. The three major changes introduced by the bench in the Act’s mandate were—lifting of the absolute bar on grant of anticipatory bail to the accused if no prima facie case is made out, preliminary inquiry into the veracity of the allegations and requirement of approval by SSP in case an accused is a non-public servant. These were thus seen as dilution of the Act’s objectives.

In the Supreme Court, Gaikwad has made further allegations against Mahajan with regard to the FIR registered by him, saying that he had misled the Court. Meanwhile, the new amendment Act has also been challenged in the Supreme Court. Will the new bench defer to the centre’s wisdom in amending the Act in order to mitigate the upheaval caused by last year’s judgment? The outcome of the case may also throw light on whether Mahajan was guilty after all.