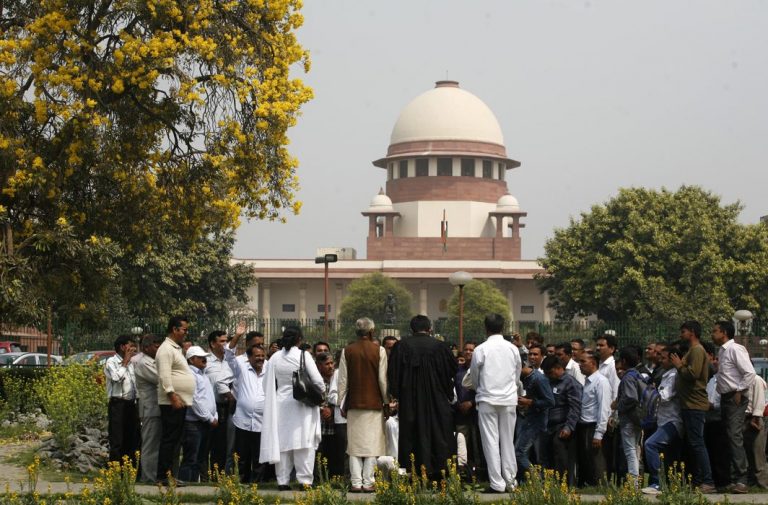 The top court gave verdict today in the Bhima Koregaon raids case. The bench comprising CJI Dipak Misra and Justices A M Khanwilkar and D Y Chandrachud made important observations. Here are some of the observations:

“Should the Investigating Agency be changed at the behest of the named five accused? If the answer to point (i) is in the negative, can a prayer of the same nature be entertained at the behest of the next friend of the accused or in the garb of PIL? If the answer to question Nos.(i) and/or (ii) above, is in the affirmative, have the petitioners made out a case for the relief of appointing Special Investigating Team or directing the Court monitored investigation by an independent Investigating Agency? Can the accused person be released merely on the basis of the perception of his next friend (writ petitioners) that he is an innocent and law abiding person?”

“In the present case, except pointing out some circumstances to question the manner of arrest of the five named accused sans any legal evidence to link them with the crime under investigation, no specific material facts and particulars are found in the petition about mala fide exercise of power by the investigating officer. A vague and unsubstantiated assertion in that regard is not enough. Rather, averment in the petition as filed was to buttress the reliefs initially prayed (mentioned in para 7 above) – regarding the manner in which arrest was made. Further, the plea of the petitioners of lack of evidence against the named accused (A16 to A20) has been seriously disputed by the Investigating Agency and have commended us to the material already gathered during the ongoing investigation which according to them indicates complicity of the said accused in the commission of crime. Upon perusal of the said material, we are of the considered opinion that it is not a case of arrest because of mere dissenting views expressed or difference in the political ideology of the named accused, but concerning their link with the members of the banned organisation and its activities. This is not the stage where the efficacy of the material or sufficiency thereof can be evaluated nor it is possible to enquire into whether the same is genuine or fabricated. We do not wish to dilate on this matter any further lest it would cause prejudice to the named accused and including the co-accused who are not before the Court. Admittedly, the named accused have already resorted to legal 40 remedies before the jurisdictional Court and the same are pending. If so, they can avail of such remedies as may be permissible in law before the jurisdictional courts at different stages during the investigation as well as the trial of the offence under investigation. During the investigation, when they would be produced before the Court for obtaining remand by the Police or by way of application for grant of bail, and if they are so advised, they can also opt for remedy of discharge at the appropriate stage or quashing of criminal case if there is no legal evidence, whatsoever, to indicate their complicity in the subject crime.”

“In view of the above, it is clear that the consistent view of this Court is that the accused cannot ask for changing the Investigating Agency or to do investigation in a particular manner including for Court monitored investigation. The first two modified reliefs claimed in the writ petition, if they were to be made by the accused themselves, the same would end up in being rejected. In the present case, the original writ petition was filed by the persons claiming to be the next friends of the concerned accused (A16 to A20). Amongst them, Sudha Bhardwaj (A19), Varvara Rao (A16), Arun Ferreira (A18) and Vernon Gonsalves (A17) have filed signed statements praying that the reliefs claimed in the subject writ petition be treated as their writ petition. That application deserves to be allowed as the accused themselves have chosen to approach this Court and also in the backdrop of the preliminary objection raised by the State that the writ petitioners were completely strangers to the offence under investigation and the writ petition at their instance was not maintainable. We would, therefore, assume that the writ petition is now pursued by the accused themselves and once they have become petitioners themselves, the question of next friend pursuing the remedy to espouse their cause cannot be countenanced. The next friend can continue to espouse the cause of the affected accused as long as the concerned accused is not in a position or incapacitated to take recourse to legal remedy and not otherwise.”

“We find force in the argument of the State that the prayer for changing the Investigating Agency cannot be dealt with lightly and the Court must exercise that power with circumspection. As a result, we have no hesitation in taking a view that the writ petition at the instance of the next friend of the accused for transfer of investigation to independent Investigating Agency or for Court monitored investigation cannot be countenanced, much less as public interest litigation.”

“…we have advisedly refrained from dealing with the factual issues raised by the parties and including the named accused represented by their counsel before us, as any observation made by this Court may cause serious prejudice to them or the co-accused who are not before this Court or, for that matter, the prosecution case, resulting in serious miscarriage of justice. Similarly, we do not wish to burden the judgment with the other reported judgments relied upon by the counsel for the parties and dealing with legal propositions canvassed by them, which are not necessary to be answered in the present writ petition.”

“…The facts of the above case are distinct from the case at hand. The observations made on the maintainability of public interest litigation only lend support to the present case. The petitioners in the present case are not anonymous. There has been no argument that the petitioners have been motivated by personal gain or political considerations.”

“This Court has a constitutional obligation, where its attention has been drawn, in a case such as the present, to a real likelihood of the derailment of a fair investigative process to issue appropriate directions under Article 142 of the Constitution.”

“Hence, I am of the view that while the investigation should not be thwarted, this is a proper case for the appointment of a Special Investigating Team. Circumstances have been drawn to our notice to cast a cloud on whether the Maharashtra police has in the present case acted as fair and impartial investigating agency. Sufficient material has been placed before the Court bearing on the need to have an independent investigation.”

“Hence, following the line of precedent of this Court which has been discussed earlier, I am firmly of the view that a Special Investigating Team must be appointed. The investigation shall be monitored by this Court. The Special Investigating Team shall submit periodical status reports to this Court, initially on a monthly basis. The interim order passed by this Court on 29 August 2018 shall continue to hold the field for a further period of three weeks within which it would be open to the said five individuals or any one or more of them to apply for bail before the Court of competent jurisdiction. I would direct that the petition be listed after three days for orders on the constitution of the Special Investigating Team. There shall be an order in these terms.”

Kindly click on the link below to read the full judgment: