A PIL has led the National Pharmaceutical Pricing Authority to fix the price of stents, thereby providing a huge relief to heart patients. Stent-makers and hospitals are also to display the new prices on their websites

How often have we come across shocking medical practices where patients are made to cough up huge sums of money for medical devices that were not required or are not as expensive as touted? In recent weeks, thanks to a PIL, it has been revealed that profits from stents, which open up clogged arteries, range from 270 to 1,000 percent! Scared relatives often do not even bother to question the fat bills as they see a loved one fight for life.

When advocate Birender Sangwan visited Faridabad’s Metro Hospital two years ago where the brother of one of his friends was undergoing a heart surgery, little did he realise that he would soon be helping many cardiac patients who got fleeced by hospitals for stents. “The total bill came to around Rs 3.30 lakh and I found that the hospital had charged over Rs 1.25 lakh for a stent that was actually priced at Rs 23,000. The only way to stop this unethical practice and hospital scam was to file a PIL,” he told India Legal.

Sangwan in his petition pointed out that around 30 percent of the urban population and 15 percent of the rural population suffered from heart-related ailments which was emerging as the number one killer in India. Most of these elements, he said, were related to the blocking of arteries which required stents to be inserted into them. As it was overly priced, he wanted coronary stents to be included in the National List of Essential Medicines so that these prices could be regulated. 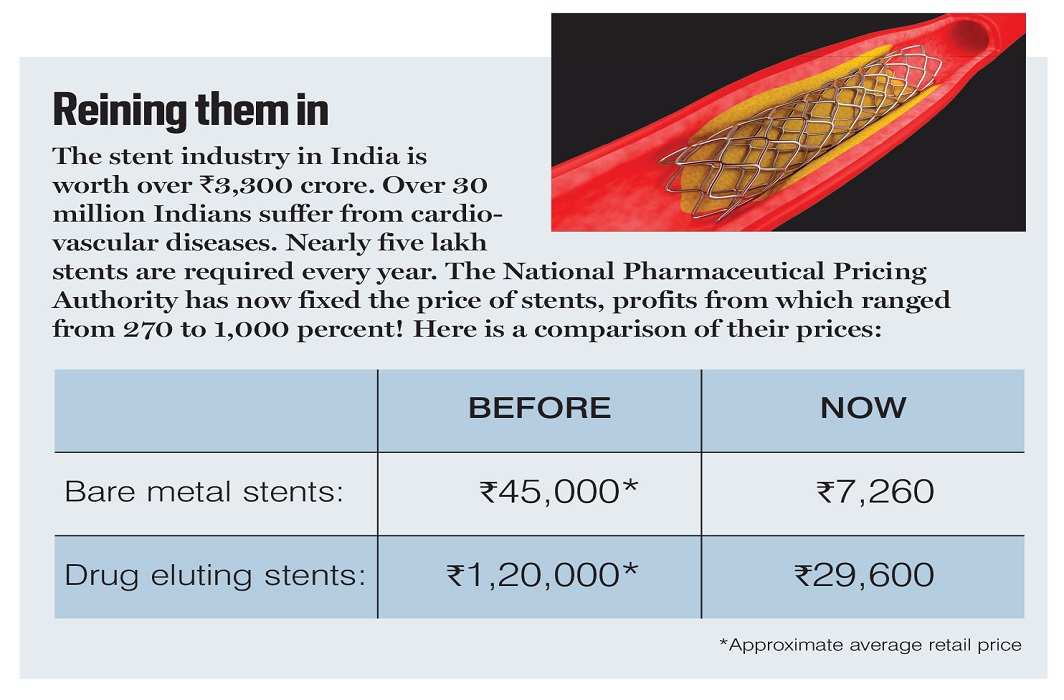 The National Pharmaceutical Pricing Authority (NPPA) which is responsible for fixing drug prices swung into action and capped prices of bare metal stents at Rs 7,260 and drug eluting stents at Rs 29,600. Till recently, the average retail price for a bare metal stent was Rs 45,000 and for drug eluting stents, around Rs 1.20 lakh. To stop any further ambiguity, the drug price regulator has asked stent-makers and hospitals to display the new prices on their websites. Hospitals will now have to bill stents separately and follow the Drug Price Control Order that says that every retailer and dealer shall display the price list and the supplementary price list in a conspicuous part of the premises that is easily accessible.

Health activists feel that the Court’s move has set a good precedent to stop unethical practices by hospitals and doctors. This comes as a huge relief to thousands of patients who have to undergo angioplasty.

A senior doctor told India Legal on condition of anonymity: “It now seems that all doctors are racketeers. It is not so. Actually, even doctors do not know the real cost of producing stents. They just buy them from the manufacturers who charge heavily. It is their profit margins that have destroyed the system and doctors have played along as they also make huge money. There is no end to greed. The tragedy is that the end-user pays the price.”

Data released by the NPPA shows that by the time a stent moves from the manufacturer’s table to the operation theatre, it can cost the patient over ten times due to the high margins. Hospital margins are among the highest in the chain, sometimes crossing 600 percent! No wonder, then, that hospitals were opposing price control on stents.

A hospital source said that while the real price of a stent might be lower, the hospital gets the distributor to give them a bill showing a higher price.

This is used to make the patients cough up more. The stent industry in the country is worth over Rs 3,300 crore. Over 30 million Indians suffer from cardio-vascular diseases. Nearly five lakh stents are required every year.

Former health secretary, K Sujatha Rao, told India Legal: “The government move to regulate the prices of stents will result in a huge saving for patients as stents which costs Rs 30,000 were being billed to them for almost Rs 2-3 lakh. As there is no profit margin now, hospitals may not force patients to go for procedures that were not required. The challenge is enforcement, quality care and getting insurance companies to now reduce their premiums. Patients must get detailed bills so that they know what they are being charged for and not get cheated in the name of packages. The government must ensure that the prices of other medical procedures too are reduced to a realistic level.” 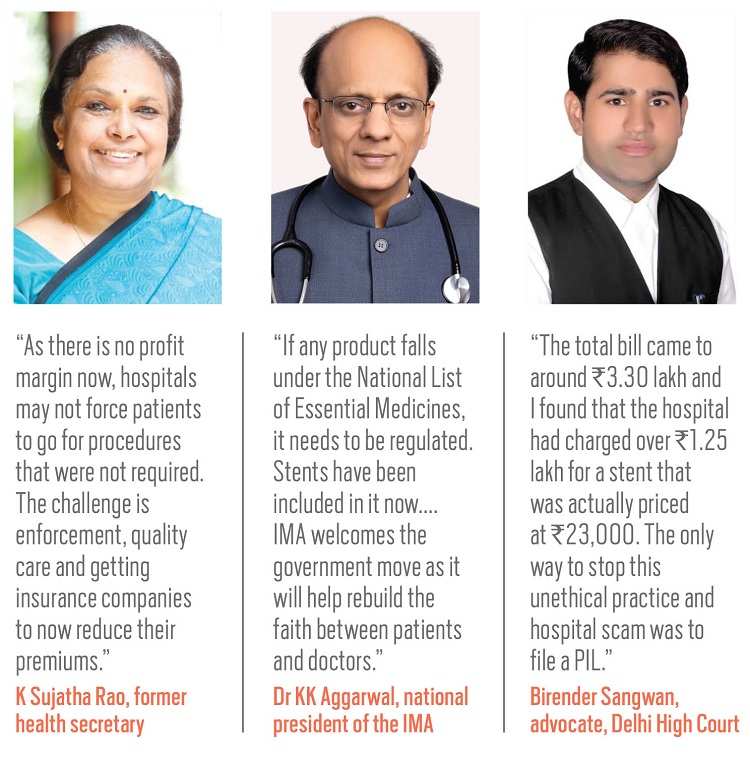 One argument that hospitals and doctors are now employing is that the low cost of stents will stop research into better stents. Bhupendra Singh, chairman, NPPA, said that before a manufacturer puts out a product, the cost of research that made it possible is woven into it. It was the huge profit margins of importers that were distorting the system, he said. The Indian Medical Association (IMA) said that if a manufacturer comes out with an advanced stent that is more expensive, they can write to the government for consideration of relaxing the cap.

A senior cardiologist said: “The PIL has just scratched the tip of the medical scandal in India. If hospitals and leading doctors are investigated, the little faith that patients have in them will be blown to bits. Even good doctors will lose their credibility. It is a huge scam that involves not just stents, but organ transplants, pharmacy companies, drug controllers and much more.”

Dr KK Aggarwal, national president of the IMA, told India Legal: “If any product falls under the National List of Essential Medicines, it needs to be regulated. Stents have been included in it now. Medical professionals are not in any case supposed to profit from consumables as it is a direct conflict of interest. They can raise their professional fees if they want to earn more. IMA welcomes the government move as it will help rebuild the faith between patients and doctors.”

Rao said that it must be ensured that the benefits of this government move are passed on to the patients. “We must also ensure that hospitals do not try to make up for their losses in profit margins by raising their health service costs,” she said.

Encouraged by the Court order and the government move, Sangwan is now contemplating filing applications under the Drugs and Cosmetics Act asking for a cap on 14 more medical devices like knee replacements that are very expensive.

Added a doctor from a major south Delhi hospital: “There will be more PILs. There will be numerous audits into medical practices and investigations will follow. We have reached a stage where it is normal to be corrupt. This has to change.”