The proposed Financial Resolution and Deposit Insurance Bill 2016 may seem a laudable measure to save sick banks. But it leaves innocent depositors by the wayside as they stand to lose their savings

Post-demonetisation, the buzzword in the finance ministry as well as in the banking circles is restructuring. The speculation is that the banks, finance companies and the RBI itself will have to go through a process of change in 2017—a change which will not only re-orient their functioning but also impact all depositors and all those people who are transacting business with them.

The key agent to bring about this “reform” is said to be the Financial Resolution and Deposit Insurance (FRDI) Bill 2016, which the finance ministry has drafted and hopes to place before parliament in 2017. The proposed legislation finds mention in the RBI’s Financial Stability Report (Volume 14) released in December 2016. In it, the broad contours of the Bill are outlined, which crucially proposes the setting up of a high-powered independent corporation to “cover sick financial sector entities viz., banks, insurance companies, non-banking financial companies, holding companies, financial market infrastructures and systemically important financial institutions (SIFIs)”.

The proposed Financial Resolution and Deposit Insurance Corporation (FRDIC) will have four major tools at its disposal for action once a bank or a financial service entity becomes sick due to the burden of debt caused by unrecovered loans or non-performing assets (NPAs).

The four resolution tools envisaged are:

(i) sale/merger with another institution

(ii) transfer of assets and liabilities to a bridge service provider

With the setting up of the FRDIC, finance ministry officials say the role of the RBI in protecting depositors and their accounts will be largely diminished. “Like other central banks in the developed world after the 2008 meltdown, the RBI will also be addressing larger issues of fiscal policy implementation, interest rates and currency supply. Dealing with sick banks, insurance and finance companies will be left to the FRDIC once the new Bill becomes law. This may not be good news for depositors,” a ministry source told India Legal.

According to him, the “bail-in” proviso in the proposed Bill should be a cause for particular concern. A bail-in is the opposite of a bail-out when a financial institution on the verge of collapse is rescued by the government. Taxpayer’s money in this instance is used to save the failed institution or bank. In a “bail-in”, the depositors’ money is used for the rescue act without their consent. In short, those who have deposits will stand to lose a substantive chunk of their money should the banks go under and they will have no legal recourse under the Bill to recover the amount other than what has been insured by their banks.

Not many know that currently, banks in India insure only Rs 1 lakh of each depositor’s money. This cover is provided by the Deposit Insurance and Credit Guarantee Corporation of India (DICGC), an RBI subsidiary. The insurance pertains to all accounts held across different branches of the same bank by an individual. This includes savings accounts, fixed deposits and current accounts. So, in effect, all that one can recover is Rs 1 lakh irrespective of the number of accounts held in a bank or the monies in them. The DICGC and its operations have so far attracted very little public attention since there is no history of established banks folding up as they enjoy RBI and government protection.

Meera Nangia, an associate professor in commerce at the University of Delhi who has studied the Indian banking system, has written about the dangers of the FRDI Bill becoming law in The Wire. To quote her: “…it (the FRDI Bill) would create a ‘resolution regime’ that would hurt all bank deposit account holders, even those with legitimate money—pensioners, home-makers, self-employed small business people, service providers such as domestic help, plumbers, electricians, carpenters and so on who have put their lifetime of savings in banks. This is a double whammy. First, banks use depositors funds to disburse loans without proper due diligence. Then, in case of defaults by the borrowers, the depositor is expected to make good the losses on account of the bank-business nexus.”

Keeping depositors in mind, some bank officials point out that safeguards must be introduced in the proposed Bill so that those who have placed faith in banks are not penalised. “Currently, there is no clarity on how much of the depositors’ money will be protected. The Bill does not give any details. But in a bail-in situation, one can assume that much of it will be lost,” a bank official said.

One can only hope that the FRDI Bill will not be passed without discussion in parliament. Our law-makers must insist on better protection for depositors, who should not be made victims.

An analysis by Sprott Asset Management, a Toronto-based consultancy, spells out the predicament of the unsuspecting depositor: “Most depositors naively assume that their deposits are 100 percent safe in their banks and trust them to safeguard their savings. Under the new ‘template’, all lenders (including depositors) to the bank can be forced to ‘bail-in’ their respective banks. Several G7 countries already have provisions that allow troubled banks to be bailed-in using depositor accounts.” The “bail-in” option was first infamously used in Cyprus. (See box). 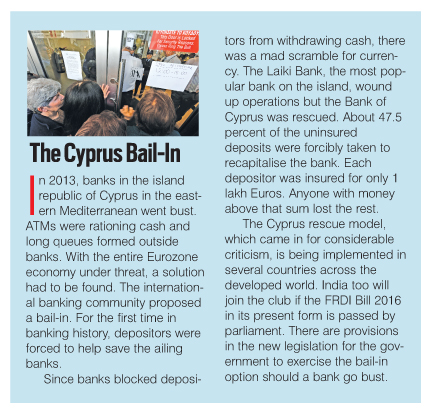 A ten-member committee headed by Ajay Tyagi, additional secretary (investment), Department of Economic Affairs which drafted the Bill, has spelt out the objectives of the FRDIC. They are: “Contributing to the stability and resilience of the financial system; protecting consumers up to a reasonable limit; and protecting public funds, to the extent possible.” The “reasonable limit” has not been quantified. So will the insured amount remain at the present Rs 1 lakh? In EU countries, this is capped at 100,000 Euros.

It was Finance Minister Arun Jaitley who first referred to the new Bill in last year’s budget speech. He noted that a code was being developed to “provide a specialized resolution mechanism to deal with bankruptcy situations in banks, insurance companies and financial sector entities”. By doing so, Jaitley, according to finance ministry insiders, was only implementing the commitment made by India at the G20 Summit in Brisbane in November 2014 which was attended by Prime Minister Narendra Modi.

India had then endorsed a proposal to implement a “resolution regime for financial institutions”. The proposal was drafted by the Financial Stability Board (FSB), an international body formed in 2009 after the global meltdown, which monitors and makes recommendations about the global financial system. The FSB had been pushing for a regime wherein sick banks are not bailed out by governments but bailed-in by depositors. The FRDI Bill has been modelled on the formula suggested by the FSB.

Today, thanks to demonetisation, banks are flush with funds. The pressure is on bankers to give easy housing and retail loans. The RBI has cut interest rates and no less than the prime minister has announced home loans for the poor at 3-4 percent interest. Banks see a period of profitability ahead as they sense a surge in credit. But the sceptics say they must not forget that a huge boom in home loans in the US was what precipitated the 2008 global financial crisis.

In this context, many feel, banks should show due diligence while disbursing loans even as their political masters urge them to loosen their purse strings. If they buckle under pressure, then banks will only be adding to their NPAs which currently stand somewhere upwards of a staggering Rs 6 lakh crore. With loan recoveries vis-a-vis NPAs slowing down and at its lowest in the last four years, banks surely have to tread extremely carefully.

Meanwhile, one can only hope that the FRDI Bill will not be passed without adequate discussion and debate in parliament. Our law-makers must insist on better protection for depositors. The latter should not be made victims of the “bail-in” raj should banks script their own decline through indiscriminate loans and suspect banking practices. Certainly, a country like India which has little or no social security cannot afford to sacrifice long-term depositors who have reposed their faith in the banking system.

Lead Picture: People standing in long queues to exchange their old notes at a bank in Agartala. Photo: UNI