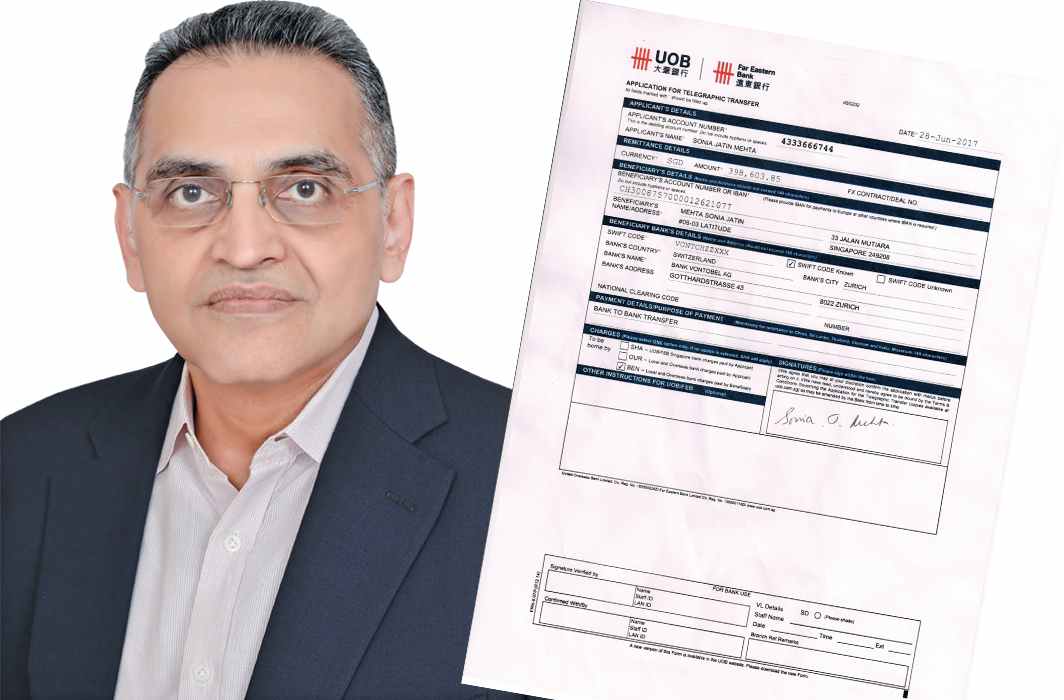 Above: Jatin Mehta and the document showing his wife Sonia Mehta’s Swiss account

A document has revealed that the wife of Jatin Mehta, the promoter of Winsome Diamonds, which owes banks a whopping Rs 7,000 crore, transferred money into an account in Zurich, showing that they face no financial crunch

In the rogues list of those declared as wilful defaulters by banks, Winsome Diamonds and Jewellery Ltd is ranked number two. With Rs 7,000 crore in bad debts, the company is just a rung below Vijay Mallya who has a cumulative outstanding of Rs 9,000 crore. The latter, as we know, is safe in England until such time that the Indian authorities can deport and bring him back to India to face trial.

But what of the Winsome Group and its promoter, Jatin Mehta? All that we know is that he and wife, Sonia, have fled the country and taken citizenship in the Federation of St Kitts and Nevis, a tax haven with which India has no extradition treaty. They are currently based in Dubai and London but travel widely between Singapore, London, Europe and the US and maintain Swiss bank accounts.

A document accessed exclusively by India Legal confirms that Sonia has a Swiss account. On June 28, Sonia Jatin Mehta applied for a bank to telegraphically transfer 3,98,603.85 Singapore dollars (SGD) worth approximately Rs 1.86 crore from her Far Eastern Bank Account No: 4333 666 7444 in Singapore to an account in Bank Vontobel AG, Gotthardstrasse 43, Zurich, Switzerland (SWIFT CODE: VONTCH22XXX). She gave her Singapore address as 33, Jalan Mutiara, Singapore-249208.

Such bank transfers do not come as a surprise to ED officials. Those who operate and live abroad require easy access to funds in Europe and the US. They find a Swiss bank account a matter of convenience. However, much of the assets of the Mehtas in India have been attached and their bank accounts have been frozen.

Jatin Mehta also owns a company in the UK. Called the Diamond Distribution Company (UK), it was incorporated on August 1 last year. Mehta has listed his address with the Registrar of Companies in the UK as 1 Bell Street, 2nd Floor, London, England, Nw1 5BY.

According to CBI sources, the Mehtas gave up their Indian citizenship in 2013-2014 and now have a St Kitts and Nevis passport. The government of this dual-island nation in the Caribbean has a “citizenship by investment” programme which has attracted several foreign nationals from across the world to the tax haven.

Those who make a substantial contribution to the development of the country are offered citizenship for life without much red tape or tedious verifications. The St Kitts passport provides visa-free travel to over 100 countries, including Schengen nations, Switzerland, UK and Ireland.

According to an ED official in Mumbai, what makes St Kitts a perfect haven is the fact that one doesn’t have to reside or visit there to be a citizen. “You just have to donate US $2,50,000 per head to the Sugar Industry Diversification Foundation (SIDF), a charitable organisation set up by the government ostensibly for displaced sugar industry workers, and you are a citizen. In six months, you get your passport which is valid for 10 years and renewable. It is a simple process. You transfer the money and meet the officials once in Dubai, London or Zurich and your papers move without any further questions asked,” said the official.

Alternatively, a prospective citizenship seeker can invest in real estate. The minimum required is US $4,00,000 per head in approved projects. There is a lock-in period of five years, after which the property acquired can be sold. Indian investigators are not clear about the plan opted by the Mehtas to acquire citizenship.

Apparently, Jatin Mehta and his wife applied for citizenship in 2013-2014. It was in March 2013 that the Winsome Group started having trouble with repayment of bank loans. In October of that year, the company and its promoter were declared wilful defaulters and the loans declared as non-performing assets. The CBI, which was handed over the case in 2014, has subsequently filed cases against Mehta and his company.

While Mallya’s every move has been monitored by the media in the UK, the Mehtas have not quite commanded the same attention. Is it because the latter have never been in the public eye while the king of good times, as Mallya is better known, was always in the news given his flamboyance and Rajya Sabha MP tag?

Jatin Mehta also has political connections. His son, Suraj, is married to Krupa, the daughter of Gautam Adani’s brother Vinod Shantilal Adani. The marriage took place in January 2012 and created a buzz in the jewellery trade then because Vinod Adani was a known gold trader in Dubai and Winsome was also into the yellow metal and diamonds business.

Gautam Adani of the Adani Group is known to be close to senior BJP leaders and is said to be in the good books of none other than Prime Minister Narendra Modi. Some would go so far as to say that it is this link that has kept investigators from pursuing the Win-some case with as much enthusiasm as they have shown in the Mallya matter.

Interestingly, Vinod Shantilal Adani’s name made news when it figured in the Panama papers. Two companies he had dealings with had offshore accounts in the British Virgin island. But that revelation did not add up to much. In fact, the Panama papers itself has not triggered any serious investigation so far in India.

The bank transfer document accessed by India Legal only proves that Sonia Mehta had the finances to transfer money to her account in Switzerland. The Mehtas, one can confidently conclude, have no financial crunch although they are in debt and owe thousands of crores to Indian banks.