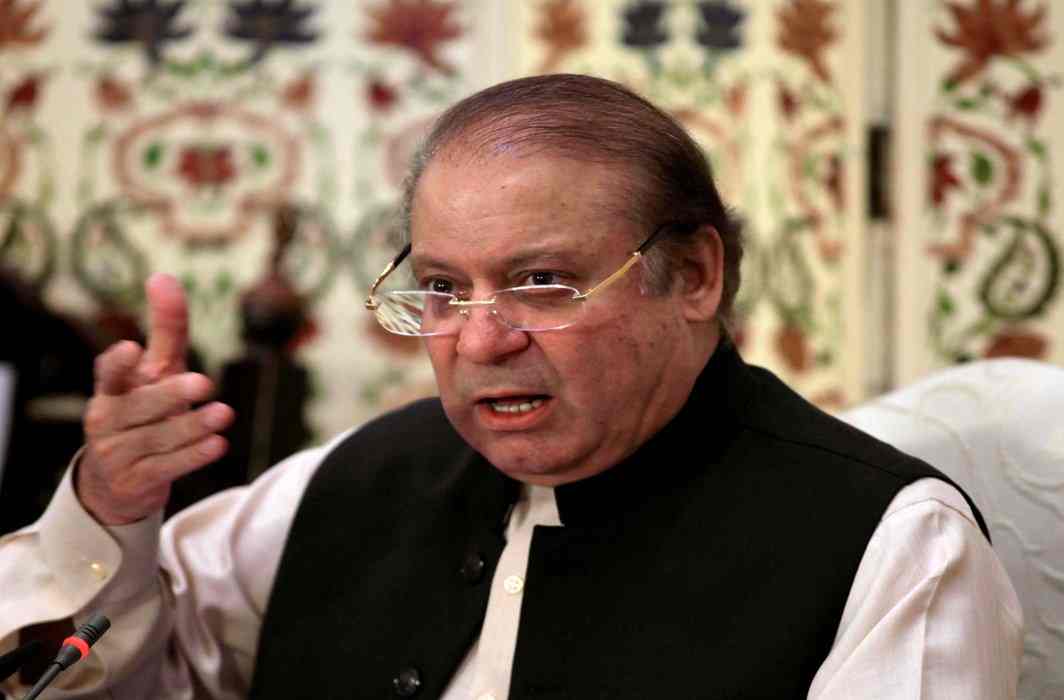 Just short of a year after Pakistan’s Supreme Court disqualified him from holding the office of Prime Minister for allegedly amassing wealth through dubious means and investing it in shady deals, the country’s Accountability Court, on Friday (July 6), sentenced Nawaz Sharif to a 10 year jail term.

The former Pakistan Prime Minister is currently in London, attending to his ailing wife Kulsoom Nawaz, who has been undergoing treatment for cancer for the past year and has been on ventilator support since three weeks after her condition deteriorated. Sharif’s daughter, Maryam, has also been sentenced to serve seven years in jail for her role in the same case – purchase of four flats in Avenfield House, Park Lane, London by the Sharifs which was exposed as a corrupt deal under the Panama Papers expose – while his son-in-law, Captain Safdar has been awarded a one-year jail term.

According to a report by Pakistan’s Dawn News, the Accountability Court has also imposed a fine of 8 million GBP on Sharif while his daughter, Maryam, has been ordered to pay up 2 million GBP.

The Dawn report adds that: “The accountability court announced the verdict in the Avenfield corruption reference filed by the National Accountability Bureau (NAB), handing ousted prime minister Nawaz Sharif 10 years as jail time for owning assets beyond income and 1 year for not cooperating with NAB. The sentences will run concurrently which means the former prime minister will serve 10 years in jail. His daughter Maryam Nawaz was handed 7 years for abetment in the purchase of the high-end properties in London, and 1 year for non-cooperation with the bureau — also to run concurrently; she will serve 7 years in total. Son-in-law Captain Safdar has been given 1 year jail time — also for not cooperating with NAB.”

The Sharifs’ lawyers said they would challenge the ruling in High Court.

Accountability Court judge Mohammed Bashir also rejected an application from the Sharifs to postpone the pronouncement of the verdict by a week. The former prime minister had, reportedly, urged the court the delay the announcement of the verdict, so that he could be present in court when the judgment was read out. Nawaz Sharif had vowed to return to Pakistan once his wife’s health improves.

It was on July 28 last year that the Pakistan Supreme Court had disqualified Nawaz Sharif as Prime Minister following a challenge to his office by Opposition leader Imran Khan on the basis of publication of the Panama Papers, which alleged that the Sharif family stashed away assets in London through offshore companies. These companies were reportedly owned by Sharif’s son Hussain Nawaz.

The Supreme Court’s decision to disqualify him from holding public office was based on the rationale that Sharif had not been truthful in his tax returns by not showing a salary as board of chairman of a Dubai-based company. The Pakistan Supreme Court had instructed the Accountability Court to complete the probe over Sharif’s assets within six months. The Accountability Court judge sought three extensions from the apex court before completing the probe last week after more than nine months.

The PML-N has termed the trial political victimisation.

It is pertinent to note that Pakistan will witness general elections on July 25. The convictions are a huge set back to the ruling party – the Pakistan Muslim League – Nawaz – which has accused the country’s powerful military establishment of conspiring against the party and the Sharifs by forcing its candidates to switch sides and join the Opposition or contest elections as independents.

Hussain, Hasan Nawaz Sharif, and Maryam Safdar, the sons and daughter of Nawaz Sharif, allegedly set up at least four offshore companies in British Virgin Islands (BVI). These companies are said to own at least six upmarket properties overlooking London’s Hyde Park. The Sharif family reportedly mortgaged four of these properties to the Deutsche Bank (Suisse) SA for a loan of GBP 7 million and the Bank of Scotland part financed the purchase of two other apartments. Nawaz Sharif has consistently denied ownership of all these properties and dismissed the allegations against him and his family.

Nescol Limited and Nielson Holdings Limited were incorporated in BVI in 1993 and 1994, respectively, and were held by one bearer share each. In February 2006, Maryam Safdar signed a resolution of Nescol Limited as the “sole (bearer) shareholder”. MF was appointed as the registered agent through Minerva Trust which described Maryam Safdar as the beneficial owner of both companies, the Indian Express-International Consortium of Investigative Journalists (ICIJ) joint investigation into the Panama papers had revealed.

The Panama Papers investigation saw multiple news organizations from across the world, including The Indian Express from India, join their efforts in 2016 on the issue of unearthing unaccounted wealth of some of the world’s most rich and famous politicians and businessmen, after the ICIJ shared files from the database of the world’s fourth biggest offshore law firm, Mossack Fonseca. The records had been obtained from an anonymous source by German newspaper Süddeutsche Zeitung.

On April 20, 2017, a five-judge bench of the Supreme Court of Pakistan had pronounced its verdict in the Panama Papers case against Sharif. However, the verdict was split as three of the five judges ruled in favour of forming a Joint Investigation Team (JIT) to find out whether the allegations against the Pakistan Prime Minister and his family were true or not. Only two judges – Justices Asif Saeed Khosa and Gulzar Ahmed – ruled for Sharif’s disqualification from office. The top court had then set up a six-member JIT to investigate the charges against Sharif and his family and had asked the first family of Pakistan to appear before the JIT as and when summoned.

In its report submitted to the apex court on July 10, the JIT said that the Sharif family led a lifestyle that was beyond its known and declared sources of income and charged them with concealment of facts and being beneficial owners of multiple offshore companies. The JIT also recommended initiation of reference against the PM and members of his family in the NAB while highlighting their failure in providing a money trail for their London apartments. Sharif, however, maintained that the JIT report was a “bundle of baseless allegations.”