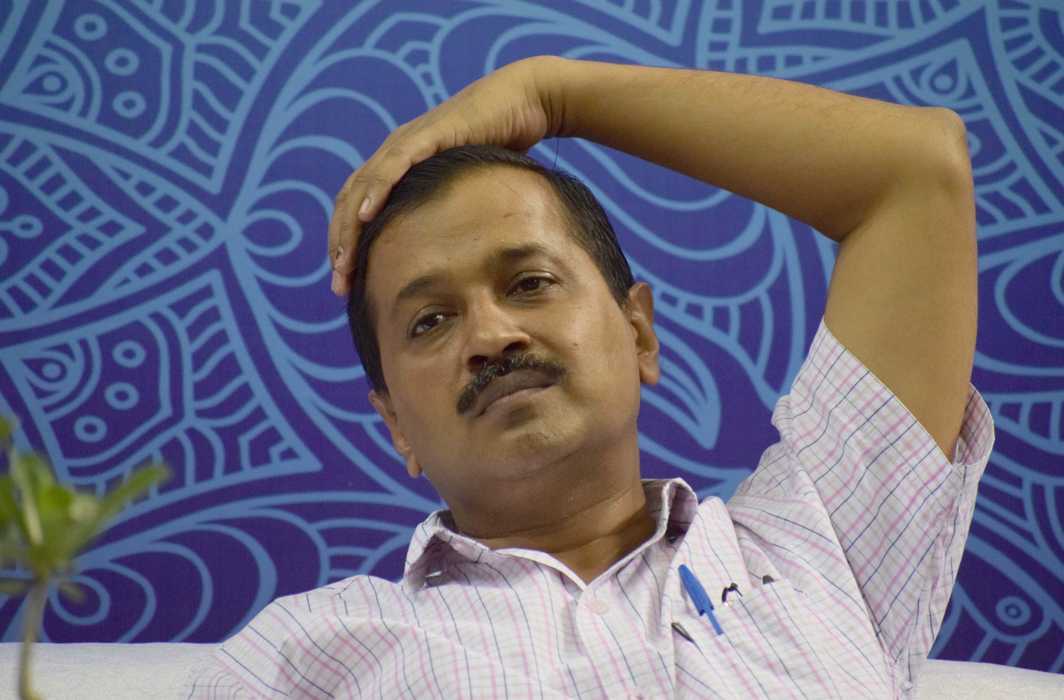 In a shocking development, Chief Election Commissioner AK Joti, who retires on January 23, recommended the disqualification of 20 MLAs of this party for holding “offices of profit”. Will the fledging party survive this lightning strike?

In a major jolt to Delhi Chief Minister Arvind Kejriwal, the Election Commission (EC) on January 19 recommended to President Ram Nath Kovind that 20 legislators of the Aam Aadmi Party (AAP) who were serving as parliamentary secretaries in the Delhi government be disqualified on grounds of holding “offices of profit”.

Assuming that the president gives his assent and the Delhi High Court, where Kejriwal’s party has challenged the disqualification, refuses to grant them any relief, Delhi will see a by-election to the 20 assembly constituencies represented by these beleaguered AAP legislators. This puts the fledging party in a piquant spot as the by-poll will be held at a time when the party is not only engaged in a continuing battle against an antagonistic BJP-ruled centre but also faces rebellion within its ranks for stymying founding-member Kumar Vishwas’ bid for a Rajya Sabha nomination in favour of “outsiders”. 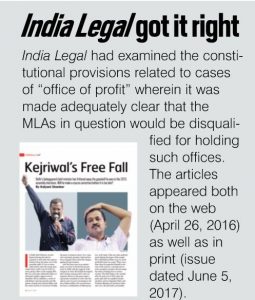 There is little clarity on what exactly the Election Commission or rather Chief Election Commissioner AK Joti (the other two election commissioners OP Rawat and Sunil Arora were not party to the order), held against the “Troubled 20” when concluding that they should be disqualified. AAP had already moved the Delhi High Court seeking a stay on the disqualification on the grounds that the EC had overstepped its jurisdiction. Justice Rekha Palli, who heard the party’s plea on January 19, had refused to grant an interim stay against the EC’s recommendation on the grounds that the exact contents of the poll panel’s order were not yet known. However, the Court is likely to hear the matter on January 22, assuming that AAP will by then have a copy of the EC order.

Prima facie, Joti’s recommendation is based on the premise that the legislators also served as parliamentary secretaries in various departments of the Kejriwal government; a post that apparently accrued a “profit” to these elected representatives. AAP has rejected this contention, saying that the Kejriwal administration had, on March 13, 2015, passed an official order stating that the parliamentary secretaries would not be eligible for remuneration or perks of any kind from the government. “However, they may use government transport for official purposes only and office space in the ministers’ office would be provided to them to facilitate their work,” the order had said.

AAP and these 20 MLAs have claimed that this order made it clear that despite serving as parliamentary secretaries, they did not enjoy an “office of profit”. This contention was submitted by the party before the EC as well as the Delhi High Court on earlier occasions too.

The grounds for disqualifying an MP or an MLA are laid down in Article 102 and Article 191 of the Constitution, respectively. According to these criteria, elected representatives can be disqualified for:

Interestingly though, the Consti-tution and the Representation of People Act, 1951 which governs the electoral process for MPs and MLAs do not clearly define the term “office”. The definition has instead been provided through different courts of the land.

In March 2006, two major “office of profit” cases had rocked the country. The first led to the disqualification of actor-turned Samajwadi Party leader Jaya Bachchan from her membership of the Rajya Sabha and the second forced then Congress president Sonia Gandhi to resign from the Lok Sabha and seek re-election. While Bachchan was disqualified by then president APJ Abdul Kalam on the grounds that as chairperson of the UP Film Development Council she held an “office of profit”, a similar charge was made out by the then BJP-led Opposition against Sonia, who was also serving as chairperson of the National Advisory Council at the time.

Bachchan had challenged her disqualification from the Rajya Sabha in the Supreme Court and it was in this case in 2006 that a detailed definition of what comprises an “office of profit” was given. The Supreme Court, while upholding Bachchan’s disqualification had held: “For deciding the question as to whether one is holding an office of profit or not, what is relevant is whether the office is capable of yielding a profit or pecuniary gain and not whether the person actually obtained a monetary gain… If the office carries with it, or entitles the holder to, any pecuniary gain other than reimbursement of out of pocket/actual expenses, then the office will be an office of profit for the purpose of Article 102 (1)(a).”

Sonia Gandhi and Jaya Bachchan came out unscathed from their respective “office of profit” controversies. Sonia won the by-election from her traditional Rae Bareli seat by a thumping margin of over four lakh votes, while Bachchan was back in the Rajya Sabha soon after her disqualification. However, the T20 brigade of AAP may not be as lucky and their disqualification also raises a larger political challenge for Kejriwal.

In the immediate aftermath of the EC’s decision, the stability of the Kejriwal government in Delhi will surely not be affected as AAP will continue to enjoy a majority with its 42 MLAs in the 70-member state assembly. However, the disqualifications will certainly dent the party’s credibility among voters in the wake of the narrative that the Congress and BJP are certain to build—that the crusaders of transparency are actually a corrupt lot, hungry for power.

AAP sources told India Legal that Kejriwal’s decision to award MLAs with posts of parliamentary secretaries was aimed at serving twin goals—allowing maximum participation of these first-time legislators in governance and massaging their new-found political egos to contain ambitious novices from defecting to a crafty BJP. Clearly, Kejriwal lacked the chops for pre-empting the political and legal fallout of what he must have thought was a smart administrative ploy.

For a party that made history in 2015 by sweeping 67 of the state’s 70 assembly seats, little seems to have gone right in the past three years. From AAP’s infamous split following the exit of founding members Yogendra Yadav and Prashant Bhushan to Kejriwal’s frequent rows with the lieutenant governor—first, Najeeb Jung and now, Anil Baijal—which are now pending resolution in both the Delhi High Court and the Supreme Court, the party seems to be on a steady descent into chaos.

Kejriwal and his colleagues are predictably, and desperately, trying to make the best out of a bad situation. The party is trying to project the disqualification of its legislators as evidence of an Election Commission compromised by the BJP, even as it prepares for an imminent by-election to these 20 seats. It is also simultaneously building a narrative that it can use should it face defeat in several of these constituencies.

AAP leaders have already indicated that the decision of Joti, a CEC who has been attacked frequently by the Oppo-sition for acting as an “agent of the BJP”, was fuelled by his “eagerness to please Prime Minister Narendra Modi”. The fact that the recommendation to disqualify the 20 MLAs could well be Joti’s last major move as CEC before he de-mits office on January 23 gives AAP leaders some ammunition to justify their attack against him. While keeping a studied silence on the row, Kejriwal has let his colleagues highlight Joti’s date of retirement as his “parting gift” to Modi. AAP already has been building up the bogey of Electronic Voting Machines being rigged to benefit the BJP and it can be assumed that the party will use the same argument if it faces a rout in the by-polls to these 20 seats.

The by-polls will give the BJP just the opportunity it was looking to discredit AAP and Kejriwal. Delhi BJP president Manoj Tewari has been quick to call for Kejriwal’s resignation and has already begun preparations for the by-election campaign.

The Congress, which has been the biggest loser in this state’s politics since AAP’s electoral debut, will also try to jump back into political relevance in Delhi with these imminent by-polls. It will hope to at least win a few seats in the assembly where it held power for 15 consecutive years but where it now has no presence at all.