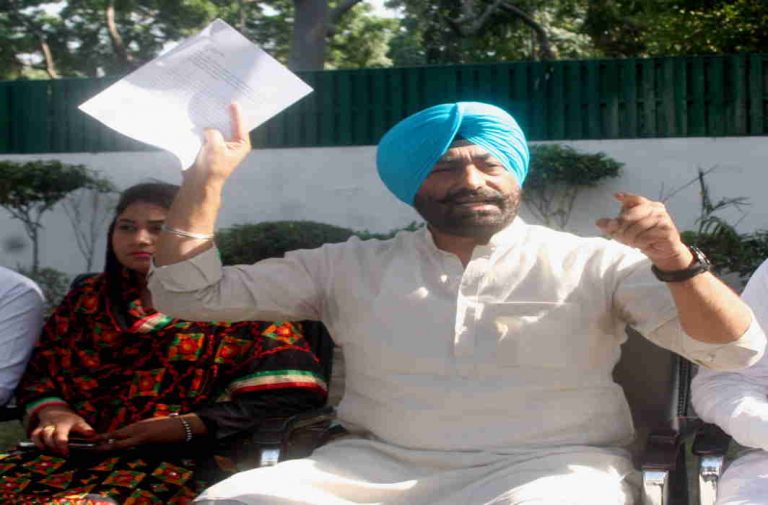 The leader of the opposition in the state assembly, Sukhpal Singh Khaira has been linked with a drug charge, making his party go on the back foot

Sukhpal Singh Khaira was the most strident critic of the Shiromani Akali Dal-BJP coalition government in Punjab from 2007 to 2017. He was then an official spokesman of the Punjab unit of the Congress. A few months before the Punjab assembly elections earlier this year, he ditched the Congress to join the Aam Aadmi Party (AAP) and turned out to be the most vocal critic of the Congress during the run-up to the elections. A few months later, however, as leader of the Opposition, he was reduced to tears at a press conference where he asserted that he was being wrongly involved in a drug-related case which could lead to his political exile. He alleged that his political rivals had “conspired” to corner him by resorting to false charges against him. The immediate provocation was a resolution passed in the assembly censuring an ally of AAP which had re-leased an audio to allege corruption in the judiciary relating to Khaira’s case.

Before breaking down in the full glare of the media, Khaira spewed the choicest of abuses against his former colleague and now chief minister (CM), Capt Amarinder Singh. He attacked the personal life of the CM despite saner counsel from his party leaders present at the press conference. He said that even the SAD-BJP combine was out to take “revenge” on him for his criticism of the coalition government in the past. Subsequently, he withdrew the abusive language on the condition that he was not apologising for his comments on Singh’s personal life but was only withdrawing the words uttered by him.

The trouble for Khaira, who now holds the status of a cabinet minister by way of his position as leader of the Opposition, began when the Fazilka additional sessions judge summoned him last month to face trial as an additional accused in a drugs case. The police chargesheet had not mentioned his name but one of the accused arrested by the police had alleged that he was in touch with Khaira. The court had also issued a non-bailable arrest warrant against him due to his failure to attend the court proceedings.

The Fazilka court had on October 31 this year sentenced nine to imprisonment in the trans-border heroin smuggling racket which surfaced in 2015. They were convicted under the Narcotic Drugs and Psychotropic Substances Act. One of those sentenced to 20 years imprisonment, Gurdev Singh, a former chairman of Market Committee Dhilwan, was allegedly found to be associated with Khaira.

Additional public prosecutors, at that stage, stated in court that Khaira was the “kingpin” of the drug racket. The court then directed the prosecution to file a supplementary challan in the matter. It also issued non-bailable summons to Khaira for November 30 under Section 319 of the CrPC (power to proceed against other persons appearing to be guilty of offence) following an application by the prosecution.

However, this is not the first time that Khaira’s name had cropped up in the case. Back in 2015, when the trial in the case had begun, a reference was made to him, although the police did not name him in the chargesheet. He had then moved an application before the High Court seeking a CBI investigation into the drug case. For some inexplicable reason, he withdrew the petition in March this year. He has now moved an application for restoration of his prayer.

Khaira moved the Punjab and Haryana High Court on November 3 against the trial court’s order, alleging “political vendetta”. However, the High Court dismissed his petition challenging the order. Justice AB Chaudhari, who heard the plea, quashed the non-bailable warrants issued against Khaira, but asked the trial court to decide the matter on merit.

He then moved the Supreme Court, which stayed the proceedings in the trial court after his counsel argued that he could not be summoned as an additional accused after completion of the trial. The division bench, comprising Justices NV Ramana and S Abdul, issued notices to the state of Punjab and adjourned the case.

AAP, which had made the drug menace one of its major poll issues in Punjab, is obviously in a quandary. The central leadership of the party has been maintaining a stoic silence on the allegations against Khaira. Even some party MLAs in Punjab are reluctant to side with Khaira. Only a couple of MLAs were present at the press conference addressed by him on the issue.

Earlier, the party had been demanding action against former Punjab minister Bikram Singh Majithia for his alleged involvement with the drug mafia. Majithia, brother-in-law of former deputy chief minister Sukhbir Singh Badal, had been facing an Enforcement Directorate investigation.

AAP had made the drug menace a major poll issue in Punjab. The central leadership of the party has been maintaining a stoic silence on the drug allegations

The Congress too had made the drug menace a major issue during the run-up to the assembly elections earlier this year. Capt Singh had declared that he would “finish” the menace four weeks after taking over as chief minister. He now claims that the problem has been checked but this is taken with a pinch of salt.

Several party MLAs, led by cabinet minister Navjot Singh Sidhu, had been demanding action against Majithia for his alleged involvement in the drug menace. No less than 40 MLAs had submitted a representation to the chief minister seeking prosecution of Majithia. However, Capt Singh has been stonewalling their demand on the ground that there is no evidence of his involvement and that he will not indulge in “political vendetta”.

Majithia, on his part, has filed several defamation cases against different media houses and has been denying all charges. Recently, a prominent English daily of the region published an apology on its front page and gave a “clean chit” to Majithia.

Although the charges against Khaira may be difficult to prove, and appear far-fetched, AAP has been pushed on the back foot with this taint of its legislature party leader.