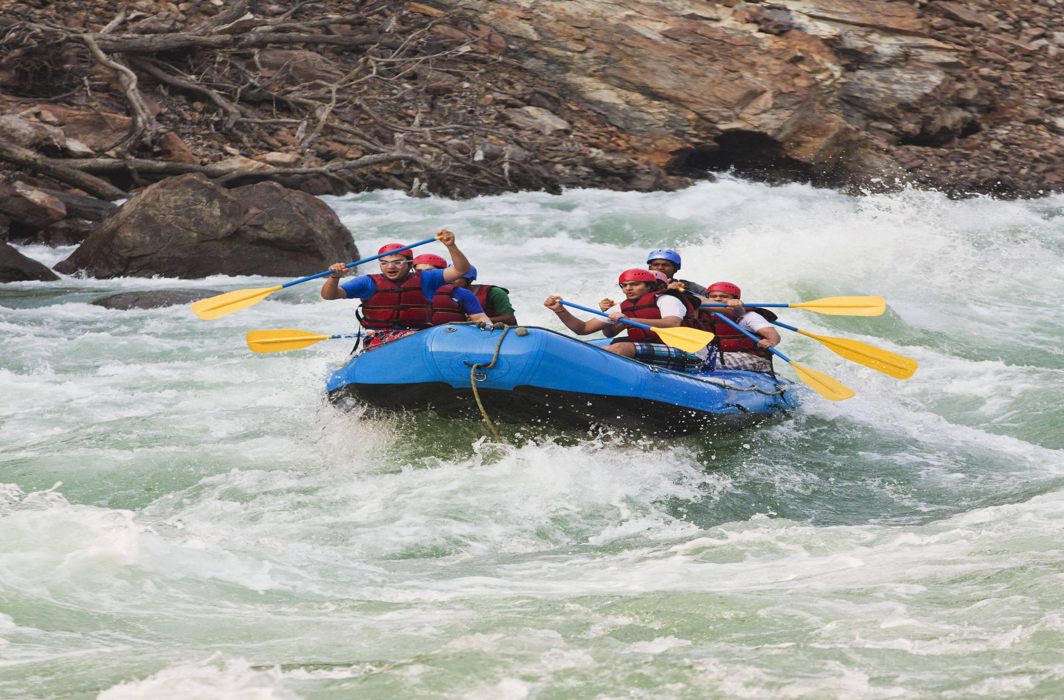 Above: For now, there will be no more river rafting in Rishikesh or elsewhere in Uttarakhand/Photo Courtesy: tajhotels.com

Think of adventure sports and what comes to mind is Uttarakhand. But that image may soon become a distant memory if the state government fails to adhere to a High Court order to frame a policy to regulate such sports. In a move to safeguard people and the environment, the Uttarakhand High Court has banned river rafting, paragliding and other water sports, ordering the state government to prepare a transparent policy within two weeks.

“Whitewater rafting is a serious sport. Paragliding is equally dangerous if not regulated. Water sports in big lakes like Tehri Dam can prove fatal,” the court observed, taking note of the deaths caused due to the capsizing of boats in the Ganga and iterating the need to regularise the activities.

It was 18 years back that Uttarakhand was carved out of Uttar Pradesh and granted full statehood. Before then and since, tourism has remained its largest source of revenue and employment despite the absence of an official tourism policy and the resultant lackadaisical attitude of the government. Its scenic hill stations with lakes, national parks, rivers and pilgrimage spots drew tourists by the lakhs but also brought along its share of problems. Nainital and Mussoorie faced their biggest challenge in the form of vehicular traffic which led to the Nainital High Court intervening in the matter.

Considering state safety and environmental concerns in the Himalayan state, the High Court has banned water sports, whitewater rafting and paragliding across the state until a transparent policy is framed by the state government within a week’s time. This ban has been enforced in June when the adventure tourism industry is at its peak.

The ban followed a public interest litigation filed by social activist Hari Om Kashyap that saw a division bench comprising Justices Rajiv Sharma and Lok Pal Singh observing last week: “We are shocked to know that the state government is permitting camping sites on riverbeds. It pollutes the environment and ecology of the river and surrounding areas. The sanctity of the Ganga is not maintained by the respondent state by permitting the lease of riverbeds. Raw sewage is permitted to directly flow into the river. The state government till date has not enacted any law to regulate whitewater rafting, paragliding or water sports,” it said.

The High Court said that river rafting and paragliding are permitted even without fixing minimum rates and display of the same by organisers. “The state government has not pointed out precisely what is the yardstick, guidelines and parameters to sanction the lease in favour of private parties on the riverbeds including for boating, rafting, paragliding and other water sports,” observed the bench.

The court emphasised the need for expert guidance and a dedicated legislation. It said, “The state government cannot be oblivious to its duties of regulating and restricting unauthorised activities. Whitewater rafting is a serious sport. Paragliding is equally dangerous if not regulated. Water sports in big lakes like Tehri Dam can prove fatal. These need to be regulated.”

The tourism industry employs around 10,000 people, including guides, cooks, instructors and drivers. The whitewater rafting sector is alone valued between Rs 75 crore and Rs 80 crore yearly. In the absence of legal sanction, these activities were carried out by private entrepreneurs. One of them told India Legal that this being peak season, in the 24 hours since the court order, he has had to suffer 200 cancellations that caused his business a loss of Rs 4 lakh.

Taking into account the rising number of deaths of river rafters, the court said these activities can only be conducted by highly trained professionals. Besides, environmentalists like Harinder Dhingra are concerned about vehicles being driven right up to the river and people littering river­beds. “Business is necessary for tourism revenue but the environment and people’s safety are of paramount importance,” Dhingra said.

Meanwhile, the order has come as a jolt to local youth directly or indirectly associated with adventure tourism. Over 1,000 have become unemployed due to the ban on paragliding and kayaking in Rishikesh, Bhimtal, Nukuchiyalal and Pandegaon. Adventure sports operators have demanded urgent resolution from the government. They had made huge investments taking bank loans. Now with cancellations rolling in due to the court order, they are staring at a bleak future. Many are unable to pay back booking money as it has been invested in buying rafts and other equipment. Sunil Kenthola, director of Nanda Devi Institute of Adventure Sports and Outdoor Education, says the government should help entrepreneurs associated with water sports. Rules were not followed in this business as there was no clear law or policy.

Closure in the tourism season has spelt doom for businesses. It is expected the High Court’s intervention will make the state government formulate a concrete policy for tourism and adventure sports in Uttarakhand which not only strengthens the state tourism industry but also promotes sustainable environmental practices. The policy should take into account monitoring of helicopter flights in high-altitude Himalayan areas, ban on garbage collectors in areas like Gaumukh, high-altitude trekking, river pollution and cleanliness of pilgrimage spots in the state.

Periodically, the Union tourism ministry releases guidelines prepared by adventure tourism operators that detail quality, safety and security norms to be adopted as standard practice. That the Uttarakhand High Court had to intervene is perhaps proof that they don’t practice what they preach.