Chief Justice of India, Justice JS Khehar, through his oral observations in court on March 21, in response to the plea of the Bharatiya Janata Party (BJP) member of Rajya Sabha and habitual gadfly Dr Subramaniam Swamy for the construction of Ram temple on the site of Babri Masjid in Ayodhya, has sent the political class and the media into a tizzy.

Khehar said that he would be able to take up the Ayodhya case only after the summer vacation, or until three more judges are appointed to the apex court. He also said that this was a difficult issue, involving sentiments, and it would be better if the parties involved were to come to an out-of-court settlement. He offered that he would not mind being the mediator, or if the parties wanted he could ask someone from among the “brother judges” to be the mediator.

Legal luminary Soli Sorabji points out that judgment of the court would be binding on all the parties, which is not so in the case of a mediated decision.

Subramaniam Swamy filed a petition for the construction of Ram temple on the mosque site in November, 2016. It was clubbed with the other appeals against the Allahabad High Court judgment in the Ayodhya case. Swamy wanted an early hearing of the case. He is seeking “judicial intervention” for resolving the issue and for building the temple. He is not challenging the Allahabad High Court judgment like the other appellants.

The Muslims have reacted with alarm, and the Hindu organisations welcomed the Chief Justice’s remarks. Kalraj Mishra, a seasoned BJP leader from Uttar Pradesh and member of the Union cabinet, told India Legal: “It is a good suggestion. If the two sides agree to an out-of-court settlement, we would welcome it.”

When asked whether the BJP would take the initiative of bringing about a compromise, given the fact that the party is comfortably ensconced in power both at the Centre and in the state, he clearly ruled out any role for the BJP in the matter.

BJP patriarch LK Advani told reporters: “The Supreme Court’s observation is a welcome step and I hope in the light of the apex court’s advise, all concerned parties will reach a consensus and find a solution to resolve the Ram Temple issue.”

Asaduddin Owaisi, leader of the All India Majlis Ittehadul Muslimeen (AIMIM) of Hyderabad, and Member of Parliament (Lok Sabha), said there could not be any talk of mediation and compromise because earlier attempts to do so have failed, and that the Supreme Court must now dispose of the appeal against the Allahabad High Court judgment of September 30, 2010, now pending in the apex court. As to whether he feared that the BJP would pass a law facilitating the construction of the temple on the disputed site, he told India Legal: “The BJP government would not do it. It will wait for the Supreme Court to give its verdict.” Owaisi, known as an adversarial Muslim voice, is confident that the BJP would not use its majority in Parliament and a brute majority in the UP assembly to push for the construction of the temple.

Majid Memon, prominent Mumbai criminal lawyer and the Nationalist Congress Party (NCP) member of Rajya Sabha, welcomed the Chief Justice’s suggestion, but thinks it would be difficult for Justice Khehar to push for it. “Justice Khehar has only few months left in office and it will not be possible for him to oversee the mediation. It will require a longer time,” he told India Legal.

A senior Congress functionary and member of the Rajya Sabha, speaking on condition of anonymity, welcomed the suggestion. And he too expressed the confidence that the BJP would not misuse its legislative majority in Delhi and Lucknow to push for the construction of the temple. He said UP Chief Minister Yogi Adityanath would not be the Hindutva hothead in office.

The Ram temple in Ayodhya is part of the core agenda of the BJP, along with Article 370 and the Uniform Civil Code.

The reason that the observations of Justice Khehar went viral, using the jargon of social media, is that there is a sense of expectation on the part of Hindu right-wingers and apprehension on the part of the Muslims and secularists that with the BJP enjoying an impregnable majority in the Uttar Pradesh assembly poll verdict, and a simple majority in the Lok Sabha post-2014, the party which gained political dominance over the contentious Ram Janmabhoomi-Babri Masjid dispute is now finally in a position to facilitate the construction of the “grand temple” in Ayodhya at the site where the Babri Masjid stood and which was razed to the ground by a mob of karsevaks or Hindutva storm-troopers on December 6, 1992.

The BJP’s calibrated stance over the issue has been that there should either be a negotiated settlement or all sides should have to abide by the court verdict. But the party is not a disinterested or a neutral bystander. The construction of Ram temple in Ayodhya is part of the core agenda of the BJP, along with Article 370 regarding special status to Jammu and Kashmir and Uniform Civil Code (UCC).

Since Modi’s take-over of the party, the issue of Article 370 has receded into the background, especially so since the BJP is part of the coalition government along with the Peoples Democratic Party (PDP) led by Mehbooba Mufti in Srinagar. The party has not abandoned the goal of bringing in the UCC. Many Muslims suspect that the BJP’s opposition to triple talaq is part of the strategy to push forward UCC.

The stand of the BJP on the Ram temple issue is not as clear as its position with regard to the other two questions. During the 2014 Lok Sabha election campaign, the then prime ministerial candidate Modi did not refer to it.

The party’s then in-charge of UP, Amit Shah cursorily referred to the goal of building a grand Ram temple in Ayodhya, but subject to the proviso of negotiated settlement or abiding by the court verdict.

The question that right-wing Hindu and Muslim organisations face is whether they would accept the apex court verdict if it goes against them. Zafaryab Jilani, Lucknow-based lawyer and convenor of the Babri Masjid Action Committee (BMAC) told India Legal in a telephonic conversation: “We will abide the verdict of the court. What the court says will be the law of the land.” But he insisted that the court must deliver the judgment, and that there is no scope for mediated settlement.

Jilani explained that there were four attempts at mediation over the last 30 years, and all of them had failed. The first was by the Kanchi Shankaracharya, Chandrasekhara Saraswati in 1986 but it fell through because the All India Muslim Personal Law Board (AIMPLB) wanted the terms and conditions of the compromise from the Hindu side to be presented in black and white, and it was not done.

The second attempt was during Samajwadi Janata Party leader Chandra Shekhar’s tenure as prime minister in late 1990 and early 1991. The talks fell through because Congress withdrew support to his minority government.

The third attempt was made by Prime Minister PV Narasimha Rao in the second half of 1992, months before the Babri Masjid was demolished. 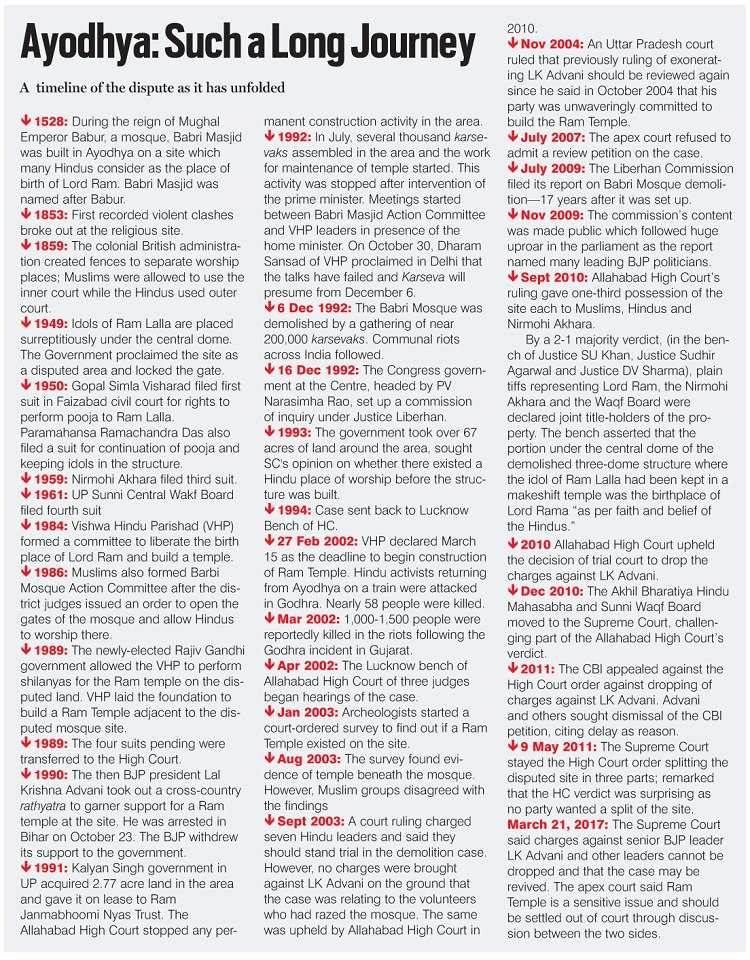 The fourth attempt was made by Kanchi Shankaracharya Jayendra Saraswati in 2002. But the compromise document prepared by him, which came into public domain, was unacceptable as it said that Muslims should surrender three mosques, including the one at Ayodhya.

Jilani says that keeping in mind these failed attempts at a compromise, it does not serve any purpose to suggest another round of mediation. But he said that Chief Justice Khehar’s suggestion for an out-of-court settlement was legal because Section 89 of the Civil Procedure Code (CPC) empowered the court to ask the contesting parties to go for arbitration or mediation.

Former attorney general Soli Sorabji told India Legal that Justice Khehar’s suggestion was “well-intentioned but impractical” and the court now must decide the case. He said a judgment of the court would be binding on all the parties, which is not so in the case of a mediated decision.

The Supreme Court will have to decide the case on legal merits and demerits. What is the crux of the Allahabad High Court judgment? In a section of the judgment called “Gist of the Findings”, it noted that “both the parties (Hindus and Muslims) have failed to prove the commencement of their title. Hence by virtue of Section 110 Evidence Act both are held to be joint title holders on the basis of joint possession.”

The High Court therefore gave the preliminary decree that 2.77 acres of the disputed site should be partitioned among the Nirmohi Akhara, the Hindu Mahasabha representing the deity, Ram Lalla, and the Sunni Wakf Board.

It is usually the case that only one of the parties is aggrieved with a verdict. But here, all the parties involved in the case challenged the judgment. Justices Aftab Alam and RS Lodha of the Supreme Court had stayed the order of the Allahabad High Court on May 9, 2011. Justice Aftab Alam of the Division Bench which issued the stay order said: “At least on one issue, all of you are unanimous. The High Court has granted a new relief which no one has asked for it. The High Court has done something on its own. It has to be stayed.”

Justice Lodha described the High Court’s conclusion as “something strange” and observed: “A new dimension has been given by the High Court as the decree of partition was not sought by the parties. It was not prayed for by anyone. It has to be stayed.”