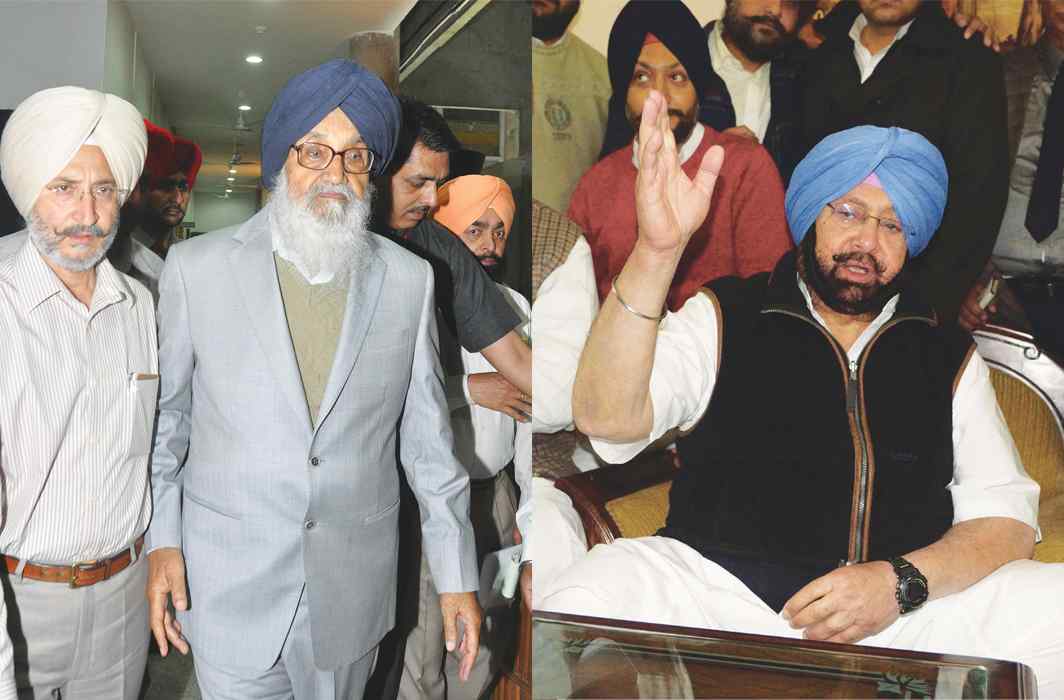 Above: Parkash Singh Badal and Capt Amarinder Singh have been rather soft on each other in corruption cases. Photo: UNI

Though both politicians have been tearing into each other during polls, there seems to be a tacit understanding between them when it comes to going soft on corruption cases against each other

The Aam Aadmi Party (AAP), which had made a serious, though unsuccessful, attempt to wrest power in Punjab, had claimed that the major reason behind its failure was the alleged complicity between the Badals and Chief Minister Capt Amarinder Singh. The party had said that there was an understanding of quid pro quo between them and they were afraid that the “AAP government would expose” them.

The party was not able to convince the people about this, but there are enough indications to point out that not only were the Badals and Capt Amarinder helping themselves when in power, but were soft towards each other when required. Of course, as part of election rhetoric, they had been tearing into each other and threatening to put the other behind bars.

Capt Amarinder, in fact, did this soon after the Congress wrested power in 2002. A case was registered against the Badals for disproportionate assets by the Vigilance Bureau, which was directly under the charge of the chief minister. The Bureau filed a challan against former chief minister Parkash Singh Badal for accumulating Rs 78.39 crore worth of assets disproportionate to his known sources of income during his tenure as chief minister from 1997 to 2002. The challan also named his wife, Surinder Kaur, and son Sukhbir Singh Badal, among others.

Seven years later, when the Badals were back in power, the same Vigilance Bureau took a U-turn and many of its officers, including the Investigation Officer (IO), resiled their statements. A special judge acquitted them in the disproportionate assets case and wrote that “no incriminating evidence” was found against them.

The court, however, directed the public prosecutor to file a complaint against two senior police officers, IG BK Uppal and SSP Surinderpal Singh, “for perjury” and “for fabricating the evidences” under Sections 120 and 183 of the IPC. These officers, who investigated the case, had turned hostile along with several other public prosecution witnesses.

Interestingly, neither Capt Amarinder, then the state Congress chief, nor the Congress reacted strongly to the acquittal. No protests and demonstrations were organised or demands made to take action against Vigilance Bureau officers who deliberately let the Badals off the hook. No one even challenged the verdict of the special judge.

Another vigilance case that fell through was filed by the Badal government against Capt Amarinder. It pertained to an alleged Amritsar Improvement Trust (AIT) land scam. The Punjab Vigilance Bureau, which had investigated the case, filed a closure report before the courts in October 2016 on the plea that it had not been able to find enough evidence against Capt Amarinder.

The 21-page cancellation report came a few months before the assembly elections and led to renewed attack by the AAP which declared that there was a “tacit understanding” between Badal and Amarinder. 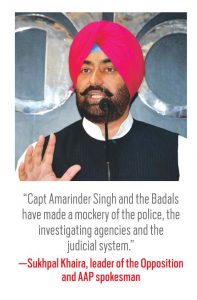 The latest incident of the dubious role played by the Punjab Vigilance Bureau is its decision to close investigations into a Rs 1,144-crore Ludhiana City Centre scam. The Vigilance had registered the case against Capt Amarinder and 35 others. They were charged for offences under Sections 409 (criminal breach of trust), 420 (cheating), 467 (forgery of value security), 468 (forgery for purpose of cheating), 471 (using as genuine a forged document or electronic record) and 120-B (criminal conspiracy) of the IPC and under sections of Prevention of Corruption Act. At that time, the vigilance department was under the charge of then deputy chief minister Sukhbir Singh Badal. Now it is under Capt Amarinder himself.

The Vigilance Bureau filed a closure report before the special judge on August 20 and took the plea that there was no “concrete evidence” that Capt Amarinder, his son, Raninder Singh, and others had committed any irregularity. It said that “there is no proof or fact to substantiate any scam in the project” and added that Capt Amarinder “never had any ill-intention in the execution of the project”.

The Bureau, infact, went out of the way to give a clean chit to the chief minister, saying: “Capt Amarinder Singh pointed out irregularities in the project from time to time, keeping in view of the people and corrected them.”

The same Vigilance Bureau had earlier charged that they had favoured a Delhi-based firm for the Ludhiana City Centre project. The construction of the prestigious project, which included malls, multiplexes, residential areas, helipad and green areas over an area of 25 acres, had started in 2006 but it is now lying in ruins.

Capt Amarinder did not react strongly to Badals’ acquittal in a disproportionate assets case. No protests or demonstrations were organised on the occasion.

The Badal government, however, did not pursue the case vigorously and the Vigilance Bureau failed to get charges framed for over 10 years and has now given a clean chit to all the accused. The court, however, is yet to accept the closure report filed under Section 173 (8) of the CrPC.

Significantly, the centre’s Enforcement Directorate (ED) had been seeking copies of the FIR to probe money laundering in the case but the Vigilance Bur-eau had been stubbornly declining it. Subsequently, the ED moved the Punjab and Haryana High Court to seek copies of the FIR and other documents. The matter is pending with the High Court.

Interestingly again, the Akalis have not reacted sharply to the closure rep-ort filed by the vigilance. This has again given a handle to the AAP to suggest “collusion” between the two. Parkash Singh Badal has asked what can they do if the court lets Capt Amarinder off the hook.

Leader of Opposition and AAP spokesman Sukhpal Khaira said: “Capt Amarinder Singh and the Badals have made a mockery of the police, the investigating agencies and the judicial system.” He has appealed to the High Court to “take suo motu cognisance of the matter and shift the case outside Punjab”.

Khaira said before the 2007 assembly elections, the Akalis had made the “Ludhiana scam” a major election issue, but had gone slow on it after they retained power. Now, he said, the government filing a closure report proved that the two were “hand-in-glove”. The “clean chit in this case has vindicated the claims of the AAP of a secret understanding between both. This is why they wanted to stop AAP from coming to power in Punjab”, he asserted.

Ironically, Khaira, who was earlier a spokesman of the Congress before joining AAP, had vigorously defended Capt Amarinder when he was with the Congress and had said that the case was registered against him out of vendetta.

No wonder it is difficult to unravel the games the politicians play.