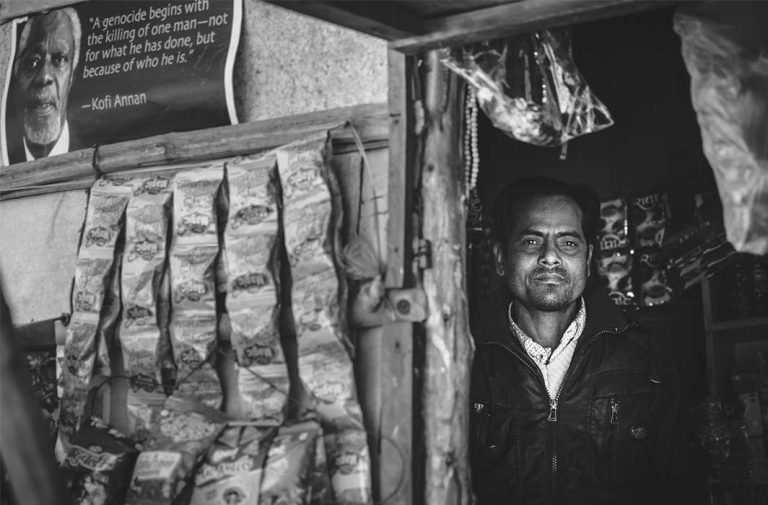 Above: A Rohingya migrant stares at his bleak future. Photo: Javed Sultan

The government seems to have woken up to the fear that the Rohingya refugees in India might have links with the ISIS and some terror groups based in Pakistan. This is what the centre’s affidavit filed in the Supreme Court says. The government also suggested that the decision to deport the refugees, who have been trickling in since 2012, should be made by the executive and not the judiciary.

The home ministry in the affidavit said: “Any indulgence shown by the highest court of the country would encourage the illegal influx of illegal migrants into our country and thereby deprive the citizens of India of their fundamental and basic human rights.”

The centre took the stand that the right to reside or settle in any part of India was only available to Indian citizens according to Article 19 (1) of the constitution. The government said that the illegal immigrants would exhaust the national resources of India and deprive citizens “of their legitimate share in the employment sector, subsidised housing, medical and educational facilities”. As it is not a signatory to the Convention Relating to the Status of Refugees, 1951 and Protocol Relating to the Status of Refugees, 1967, it is not obliged to follow its provisions, the government said.

“Rohingya presence in the country has serious national security ramifications and it poses national security threats. Illegal influx of Rohingyas into India started in 2012-13 and inputs suggest links of some of the immigrants with Pak-based terror groups. There is a serious possibility of eruption of violence against Buddhists who are Indian citizens and who stay on Indian soil by radicalised Rohingyas,” the affidavit said. It added that some Rohingyas were found to be involved in illegal activities like mobilisation of funds through hawala channels, procuring fake identity documents and human trafficking.

Though the refugees have been living mainly in Jammu and Delhi-NCR, this is the first time such revelations have been made. It has obviously not gone down well with the refugees who have fled acute persecution from the Myanmar army and Buddhist militants. In fact, the UN has called them the most persecuted community in the world.

The affidavit filed by Mukesh Mittal, joint secretary, Ministry of Home Affairs, said that if the petition against the deportation of Rohingyas was accepted, the fundamental rights of Indian citizens would be adversely affected. “The potential threat to the internal and national security of the country, diversion of the national resources to the determinant of Indian citizens differ from case to case and the central government takes its executive sovereign function based upon empirical data and objective facts by way of policy,” the affidavit said.

The Supreme Court had asked the centre to file the affidavit after a petition was filed by two refugees, Mohammad Salimullah and Mohammad Shaqir. It will now be argued by a battery of top lawyers, including Fali Nariman and Kapil Sibal.

As the government affidavit calling Rohingyas a security threat raised a storm of protests, the government announced that the affidavit was incomplete. It probably reacted this way as there was no evidence to back it.

Meanwhile, a fresh petition has been moved by three advocates in the Supreme Court praying for direction to the government not to deport Rohingya refugees to Myanmar where they face threat of persecution. The petition has been moved by Roshan Tara, Zeba Khair and KG Gopalakrishnan. Their petition said: “If the Rohingya refugees are deported back to Myanmar, there is an immediate threat of them being persecuted and robbed of their dignity by the incumbent government.”

The Rohingyas today are the world’s largest stateless community with a million of them in Rakhine province of Myanmar. They are called Bengalis by the Myanmar government and are not recognised as its citizens. Under a 1982 citizenship law, only those who can trace their residence to Myanmar before 1823 can qualify for citizenship. Under this law, the Rohingyas found that they were no more seen as citizens. The military regime in 1982 revoked the citizenship of 1.1 million Rohingyas.

Abdullah, 25, a refugee, escaped in 2012 from Mgtow village in Arakan district in Myanmar. He recounts one chilling day: “The military was picking up young men, killing them and throwing their bodies away. When they came on a raid one night, I escaped under darkness, hid in the nearby mountains and then went to a mini-island near the seashore to take a boat to Bangladesh. Agents left me on the Indian border. The United Nations High Commissioner for Refugees helped me get into a settlement in Kalindi Kunj in Delhi.”

While he said he was grateful to be allowed to stay in India, he cannot help remembering how well-off his family was when they did a fish export business. He looked blankly at his slum dwelling and wondered why the world was not waking up to human right violations in Myanmar. One of his brothers was recently picked up by the army. His sister-in-law reportedly paid an equivalent of Rs 25 lakh to get him released. He now makes a living driving an auto-rickshaw in Noida.

With India also tightening the screws on them and Kiren Rijiju, minister of state for home affairs, saying that illegal immigrants had no place in India, it was left to the UN to raise its voice in their support. The UN High Commissioner for Human Rights, Zeid Ra’ad Al Hussein, said in Geneva that it was deplorable that India wanted to deport the Rohingya refugees at a time of such violence against them. He said that India should follow the universal principle of non-refoulement where one cannot return people to a place where they risk torture or other serious violations. Of the 40,000 Rohingya refugees in India, around 16,000 have refugee documentation given by UNHCR.

Reports indicate that some Hindus have also crossed over with the Muslims from Myanmar to Bangladesh. Four lakh refugees have taken shelter in border camps in Bangladesh after a crackdown by security forces in Rakhine.

Nobel laureate and Myanmar state counsellor Aung San Suu Kyi had chosen to keep quiet on this genocide but as international pressure built up and demands for withdrawing her Nobel Peace Prize grew, she finally condemned the human right violations and violence. She said that the security forces have been advised to adhere to the code of conduct and exercise all measures to avoid collateral damage.

Meanwhile, the state governments in Assam and Manipur have asked security forces to be extra alert to stop the influx of refugees. India has tried to tread carefully on the issue as both Bangladesh and Myanmar are neighbours whom it does not want to upset as they are crucial in its fight against insurgents in the North-east who have camps in both countries.

The theatre of war rages on, driving refugees to risk fleeing even as the danger of being killed looms large.